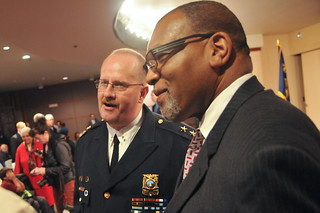 Portland’s new police chief took the oath of office in the 2nd floor auditorium of the Portland Building this morning. Larry O’Dea was sworn-in along with over a dozen other officers who also made their promotions official at today’s ceremony.

I was there mostly because I figured it’d be a rare chance to see many of the officers I’ve gotten to know over the years all in one place. I also wanted to snap photos of Chief O’Dea (and others) in case we need them for future stories.

And admittedly, I haven’t been as excited for a police chief since I moved to Portland 11 years ago (and it’s so encouraging to have a peaceful and productive transition given the scandal and controversy surrounding our last two chiefs).

I wasn’t expecting anyone to say anything about bicycling, so I was very pleasantly surprised at PPB spokesman Sgt. Peter Simpson’s introduction of Chief O’Dea. In front of a standing-room only crowd of families, law-enforcement officers and the media, Sgt. Simpson specifically called out O’Dea’s work with bicycle advocates back in 2008.

“In 2008, Larry was promoted to Captain and assigned to the Traffic Division, where he rebuilt the Bureau’s relationship with the bicycling community and implemented the Bureau’s first Community Policing Transportation Agreement.”

O’Dea took over as captain of the Traffic Division during a very tumultuous time. His diplomacy and collaborative style helped usher in a “new era” in how the bureau interacted with bicycle riders and bike advocates.

A few months ago I shared that O’Dea’s promotion to chief was good news for bicycling. After a one-on-one meeting with him yesterday to talk about bike theft, I should probably re-write that headline to say “great news.” During our meeting he actually seemed more confident about prioritizing cycling issues than I did.

O’Dea understands that Portland is a bike town and he believes our community’s needs should be reflected in his priorities. His candor about doing whatever he can to make biking better is refreshingly straightforward. 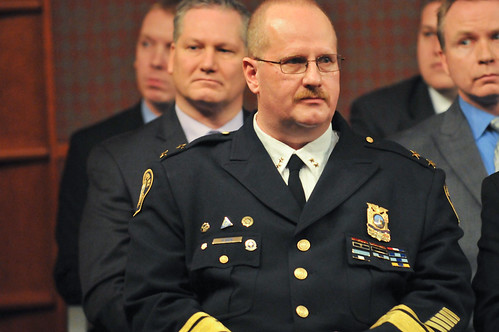 I’ll share more about progress on the bike theft front soon. For now, I just want to say congrats to Chief O’Dea and two other officers promoted to lead our local precincts. Two of them I saw this morning you might be familiar with: Former Traffic Division Captain David Hendrie is now Commander of East Precinct and Captain Chris Uehara — the subject of the gravest error of my news career — has been promoted to Commander of North Precinct. 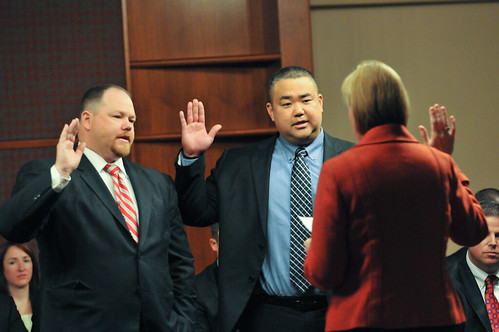 The police play a vital role in making sure bicycling is a safe and viable transportation option. We’re looking forward to working with them — and reporting on them — in 2015.

Despite Chief O’Dae’s work with the ‘bicycling community’ as Traffic Commander circa 2008, individual traffic squad officers still have ***inappropriate term deleted by moderator*** for busting cyclists, and there are other cops on the force, like Anthony Passadore, who still do, as well.

You’re right Buzz. Not every officer is on the same page when it comes to showing respect and understanding of bicycles and the people who ride them. But Chief O’Dea does. And so do many others. All I can hope for is that by working with the ones who “get” it and highlighting their success and the success of bicycling in general, eventually more will follow suit.

This is positive. As with many other organizations the culture of its employees often takes cues and becomes a reflection of their leadership.

How about a rotation program where each officer has to pull duty on a bike 2 weeks a year? Call it ‘perspective’.

Or better yet, since most of them live out in West Linn, Battleground, Tigard, etc… have them commute to work once a month. They can even pick a day where it’s warm and dry. Take Barbur into downtown ONCE a month at 8:30 on a Friday morning, and I dare you not to look at bikes and the people on them differently.

Either Capt. Hendrie is one chill dude, or he has contempt for that oath he’s taking.

“the gravest error of my news career”

You can turn past that chapter for good, now that the person who orchestrated it has become persona non grata.

I noticed when he was on Straight Talk that the Chief is a large man. Hopefully we can get him on a bike as a way of giving him the perspective of people on bikes but to also get him back into better shape. (It has worked for me.)

Jonathan, you manifest one of the best qualities to be found in a person: repentance. Rock on.