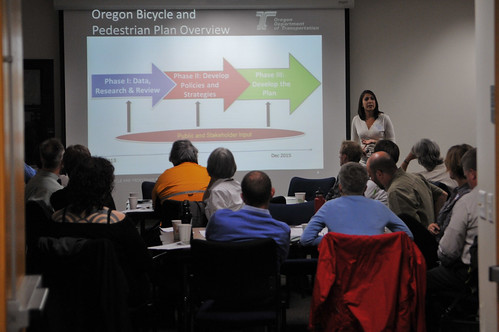 ODOT heard from experts about how they should tackle biking and walking policy.(Photos by J. Maus/BikePortland)

The Oregon Department of Transportation (ODOT) hosted a “listening session” at their Portland regional headquarters yesterday. It was the fifth of five such meetings they’re using to gather insights and learn key issues they should address in a major update to their Bicycle and Pedestrian Mode Plan.

ODOT’s existing plan for setting statewide policy around bicycling and walking was adopted way back in 1995. 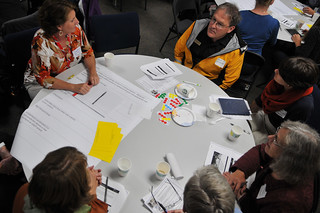 After hearing about the background of the project, attendees broke into small groups at tables of 6-8 people where they discussed specific topics and then wrote down and prioritized key policy ideas they’d like see addressed in the final plan.

A Policy Advisory Committee has been working on the plan update since December 2013. In July of this year, they released an “Issues and Opportunities Report” (PDF) along with a “Vision and Goals” and “Existing Conditions” report.

Here’s the working draft of their “Plan Vision”:

In Oregon, people of all ages, incomes, and abilities can get where they want to go on safe, well‐connected biking and walking routes. People can access destinations in urban and rural areas and enjoy Oregon’s scenic beauty by walking and biking on a transportation system that respects the needs of its users and their sense of safety. Bicycle and pedestrian networks are recognized as integral elements of the transportation system that contribute to our diverse and vibrant communities and the health and quality of life enjoyed by Oregonians.

And here are the nine goals/topic areas they are focusing on:

As ODOT consultant Peter Lagerwey presented each of these nine topic areas, he explained that ODOT has already heard wide support for all of them and the agency themselves is supportive of them in theory. “The good news is everybody’s for them… These things are valued,” he explained, “We just haven’t figured out what to do next. There’s a lack of policy support.”

This plan update, Lagerwey said, is a golden opportunity to move these ideas forward by fleshing them out and creating binding policy around them.

We weren’t able to stay until the end of the meeting, so we asked the BTA’s Rob Sadowsky to share a recap of the main ideas and themes that were generated. He told us he was surprised at how similar each tables’ main themes were. He also provided this list:

1. The need for physically separation on arterials.
2. Gaps in the network must be a clear focus before building more roads.
3. Don’t forget to incorporate Encouragement and Education into the plan, it’s not all about Infrastructure.
4. Data is a problem for a lot of people. We need better and more comprehensive data about modes and crashes, not just fatalists and near-fatals.
5. The plan needs to address how the plan will interact with other modal plans.
6. While the terms weren’t used by every group, Vision Zero kept coming up as a central guiding policy theme.

Finally, the plan needs to inspire but realistic.

ODOT says they plan to complete this process in August of 2015. We’ll be tracking it closely — especially in light of a recent spate of rear-end collisions on ODOT-controlled highways. Stay tuned for more coverage and learn more about the plan here.

Was there any discussion of lowering the default neighborhood speed limit to 20 mph?

There isn’t existing policy support for most of that stuff because it’s new in the bike/walk planning world. In other words, attention on issues like equitable investment, the link between cycling and public health, the economic case for bikeways, and so on… Were not on the ODOT radar back in 1995. Now they are very much part of the conversations so, in this plan, ODOT is trying to figure out how to take them one step further and enshrine them in official state policy.

For example… maybe bikeway projects could gain investment priority if they could demonstrate specific health impact benefits. Or, maybe ODOT could create a formula that weights project investment toward areas with major gaps in connectivity — before investing in places where adequate connectivity already exists.

“…ODOT is trying to figure out how to take them one step further and enshrine them in official state policy. ”

Sounds promising, I guess, but I’m left wondering why ODOT is taking this tack? If the trouble if over here (policy support), then why are they soliciting input from the dinner guests on a list of tasty morsels they all already recognize to be delicious but that are not on the menu? How about talking to the chefs and figuring out what it would take to update the menu?

This does not sound promising. What is wrong with these people? This sounds like the City Club’s contorted premise from which they launched their investigation of bicycling a few years back. There’s really no mystery here: Biking is good for everyone—a better deal than just about any alternative. But to make it happen you—ODOT—have to stop prioritizing freeway interchange expansions and stumping for megaprojects like Salem’s Third Bridge.

Put that in your plan and smoke it, ODOT.

Not just that, but every street that has gaps in the bike lane and sidewalk network (coughcough Hall Blvd cough)– Close the f**king gaps, make your bike and pedestrian network safe on streets like Barbur, educate the motoring public and enforce laws designed to keep vulnerable users safe.

I’ve long wondered why ODOT doesn’t want—or seem to try—to get out in front of the bad press, communicate their commitment to complete streets in a manner that is believable, and is premised on two-way communication – here are some suggestions I made about this last year –
http://bikeportland.org/2013/08/28/odot-considers-repairs-caused-by-repaving-project-on-highway-101-93191#comment-4407336

I had signed up to go to that session on Wednesday but ended up not being able to make it. I appreciate Jonathan’s summary for the rest of us.