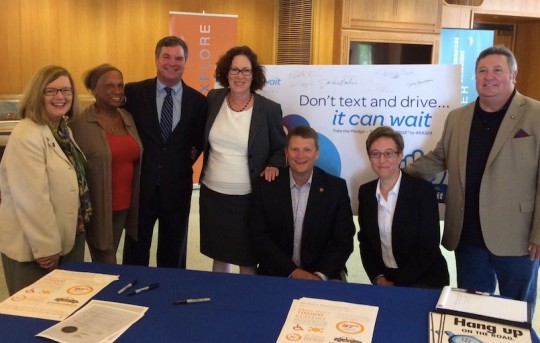 Distracted driving is one of the largest public health crises in America today, and Oregon is not immune to its impacts. According to ODOT crash data, 93 people died on Oregon roads between 2006 and 2011 and there were over 18,000 collisions due to distracted driving. If you like to ride a bike, this issue is of immense importance given that you ride just a few feet away from people driving multi-ton steel vehicles.

Yesterday at the state capitol in Salem, legislators attended an event to raise awareness of the issue and even Governor Kitzhaber has gotten involved by declaring this coming Friday, September 19th, “Distraction-Free Driving Day” in Oregon. 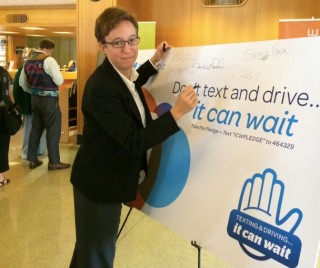 In a lobby of the capitol building, several top members of the Oregon House and Senate added their names to the over 5 million Americans who have already taken AT&T’s “It can wait” pledge. According to an AT&T spokesperson who was at yesterday’s event, the legislators included: Senate President Peter Courtney, Sen. Diane Rosenbaum, Sen. Ted Ferrioli, Sen. Jackie Winters, House Speaker Tina Kotek, Rep. Val Hoyle and Rep. Mike McLane, Rep. Shemia Fagan and Rep. Barbara Smith Warner.

The communications giant has launched the initiative to encourage people to not text and drive. Part of the campaign encourages people to text “#X” before they get into their car to let friends know they are driving and won’t respond to messages.

Last week, AT&T brought a driving and texting simulator to the Capitol and legislators tried it out for the media. According to the Salem Statesman-Journal, Senator Courtney had quite the experience trying to drive and use his phone at the same time: “It was terrible. I was hitting cars. I was running red lights,” Courtney told the paper. “You start to move off the road, and you don’t even realize it.” 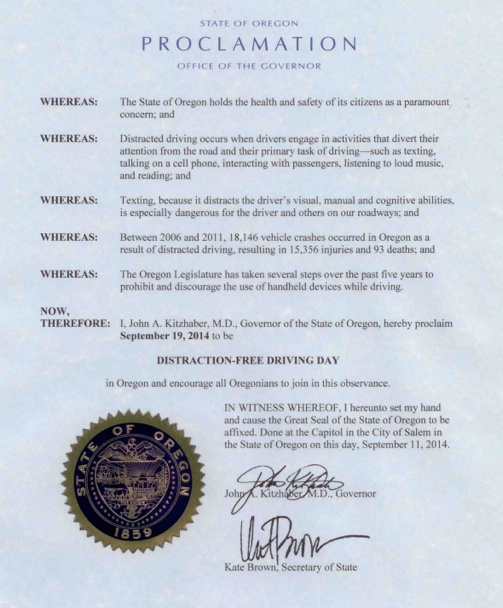 Here’s the text of the proclamation:

WHEREAS: The State of Oregon holds the health and safety of its citizens as a paramount concern; and

WHEREAS: Distracted driving occurs when drivers engage in activities that divert their attention from the road and their primary task of driving — such as texting, talking on a cell phone, interacting with passengers, listening to loud music, and reading; and

WHEREAS: Texting, because it distracts the driver’s visual manual, and cognitive abilities, is especially dangerous for the driver and others on the roadways; and

WHEREAS: The Oregon Legislature has taken several steps over the past five years to prohibit and discourage the use of handheld devices while driving.

NOW, THEREFORE:
I John A. Kitzhaber, M.D., Governor of the State of Oregon, hereby proclaim September 19, 2014 to be Distraction-Free Driving Day in Oregon and encourage all Oregonians to join in this observance.

Those “actions” Kitzhaber refers to are bills passed by the legislature to punish people who use devices while driving. The latest was Senate Bill 9, which passed in 2013 and bumped the cell phone use infraction up from a Class D traffic violation (with a base fine of $110 and maximum of $250) to a Class C violation (with a base fine of $260 and a maximum of $1,000). In addition to higher fines, SB 9 allowed ODOT to spend $123,000 on highway signage reminding drivers of the consequences.

In testimony in support of that bill back in 2013, Senator Courtney said he believes distracted driving is just as serious as drunk driving. “As such, there should be a very serious consequence,” he testified, “My intention with this bill is to achieve the same attitude towards texting and driving as there currently is towards drinking and driving.”

Oregon has a long ways to to go before our driving and traffic culture sees cell phone use in the same light as drinking and driving. Beyond proclamations and photo-ops, what we need is more money for enforcement. We also need ODOT and the state to do more to protect road users — especially vulnerable ones like bicycle riders — from momentary lapses of attention. More physically protected bicycle lanes and off-highway bicycle pathways should be seen as a key part of the solution.

How about, for a start, requiring police to sieze and destroy cell phones from drivers using them, similarly to confiscating and pouring out bottles of liquor?

How about increasing the fines? Or requiring participation in litter patrols where the offenders can feel the threat of motorists flying by while not paying attention? Or serving as crosswalk decoys?

Blah, Blah, Blah. Until stiff penalties and rigorous enforcement are in place it is just more political hot air.

Grateful for the visibility. But I’d say that making it a single day event implies that it’s some lofty and impossible to sustain goal. Like “turn off your TV week” (bad example really but all I could think of).

It’s really never ok to touch a phone while driving. It’s very different than any other distraction. It takes longer than people realize and your mind shifts to the content of the small screen. Adjusting a radio etc is mostly a tactile endeavor.

It’s risky to txt while at a stoplight. Often the pause before acceleration is misinterpreted as an invitation to proceed. That or the driver starts moving and *then* assesses the world around them and rolls right into danger.

Txting scares me for my own safety along with my family. I loathe it.

All fine and good, this focus on distracted driving, but also really cheesy – A pledge to drive and not text? How about a pledge not to drive?

Yeah, but hitting someone with your car is a ‘freak accident’ and never could have been predicted.

Its actually a much easier problem to solve than drinking and driving.

the solution is simple. we have the technology to prevent cell phone use while the engine is on. if you absolutely need to make a call, send a text, then pull over & turn off the car. you can then make your call, send your text, and then, once you’re done, you can start driving again.

I have helmet cam footage gathered every day of probably a dozen (unofficial gut-feel average) people driving while talking or texting. If I could submit the clips of that to some location and cause a city communication or citation without spending all day trudging through the citizen citation process, I’d certainly use it. I’m sure I’m not the only one gathering that kind of evidence; if they want to help, give me an upload location!

Splice this together into something coherent and I’d love to see it posted on BikePortland or Streetsblog. Video is a powerful advocacy tool!

Want to show me you’re serious? Apply the no texting rule to police as well. Just this past Sunday I watched a police officer stopped at a light get lost in her screen and not notice that the light had changed and all the cars in front of her were long gone.

When we have police killing people on bikes because of distracted driving, lying about it, and still not receiving punishment because it was “within the course and scope of his duties” then we need to change the scope of those duties.

How about some enforcement? We have stings that target bikes running stop signs at a roundabout in Ladd’s Addition, there should be some will to put together a sting for distracted driving. If PPD is looking for a location, try Interstate Ave any evening-5-6.

I’d rather they run a campaign like they did to get more people to actually follow the seatbelt law, “click it or ticket”. The proclamation really means very little without enforcing the law.

Way to go Team! You created a day that no one will know about, and barely increased fines that no one will hear about nor have any effect on its intended behavior. At least you got your political and corporate sponsorship photo op. I am willing to bet my Iphone that a grassroots campaign asking neighborhoods to make signs out of cardboard and black paint that read “No cell phones will driving” posted to trees would have a greater impact than all of the above.