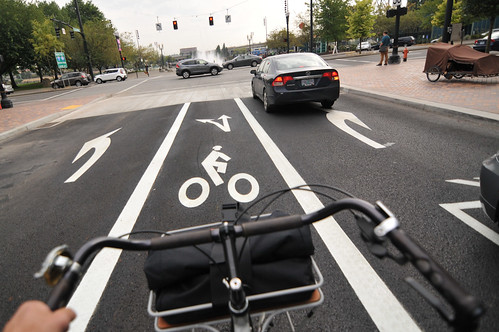 Getting to Naito Parkway and Waterfront Park from downtown Portland just got easier thanks to relatively small — yet significant — changes to two blocks of SW Salmon Street. 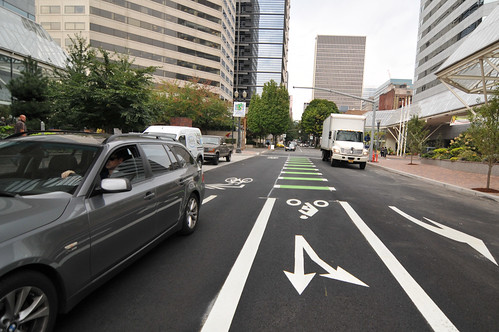 Looking west on Salmon as you approach Naito Parkway.
(Photo by J. Maus/BikePortland)

With a major project at the World Trade Center that included a repaving of Salmon between SW 1st and Naito, the Bureau of Transportation jumped on the opportunity to re-stripe the road in a way that improves bicycling access. Instead of three standard lanes between 2nd and Naito, PBOT has striped the road for two standard lanes between 2nd and 1st, and added a bike-only lane between 1st and Naito. They’ve also added sharrows in the right-turn only lane on both blocks and some green caution paint to mark the beginning of the bike lane.

Here’s a rough diagram from PBOT that shows the configuration before and after: And an aerial photo taken from a reader who works in an adjacent building: It might not look like that big of a deal, but from a bicycling perspective this is a very welcome change. Salmon just west of Naito was always a bit stressful. The shared, center lane that used to be there (and that allowed users to turn either left or right at Naito) — confused me more than once in the past as I tried to transition onto the Naito bike lane. With the new design, I have my own bicycling space and I know exactly what drivers will do in the lanes to either side of me.

According to PBOT data, there were 26 collisions/crashes at Naito and 1st, 15 of which were attributed to the dual center turn lane. Here’s more from PBOT about the goals and benefits of this project (taken from a project scoping document): And it seems others are pleased with the new configuration as well. Here’s a sampling of what we’ve heard on Twitter:

@BikePortland Just rode it. Very nice. Makes official and safer what everyone on a bike was doing there anyway. Desire lines.

@BikePortland SW Salmon and 1st a huge improvement for all users. Now, put that central bike lane from 1st to the Max track in Goose Hollow.

@BikePortland I sat and watched it for a bit during rush hour on Monday and it seems to work really well. Better and safer flow.

What’s also good news about this is that it cost PBOT just $2,000 (the World Trade Center paid for the paving), which goes to show just how inexpensively we can retrofit existing streets with higher-quality bike access.

PBOT has been on a roll lately with taking advantage of paving projects to update lane markings and configurations. Other projects where we’ve seen bicycle access improvements along with repaving projects include the new buffered bike lanes on NW Everett and the wider bike lanes (and other changes) on N Willamette Blvd.

Is anybody else thinking that cars turning left will crash into bikers as cars merge into the right lane? (I realize that cars are supposed to merge into the left lane on Naito, but in practice this is rarely followed.)

Sounds like a good place for family bikers to ride now. Especially if we get out soon and often to help the drivers get used to the new lanes.

Sweet! Very nice to see PBOT jump on an opportunity during restriping. In a city serious about bike transportation, every repave/restripe job should automatically trigger an evaluation of these minor adjustments to make biking and walking more comfortable and safer.

I have been using this as the way home from dropping off and picking up my son from school (13th and Salmon). I have always just taken the middle lane and ride straight across to the park. I wasn’t afraid in the past and this now makes it even better. I the only thing that bugs me is the four way stop sign just before it. I thought it was a light, is the stop signs just temporary?

I agree. I like the new bike lane but the 4 way stop is absolutely confusing for pedestrians, cars, bicycles, trucks. Definitely a crash will occur here.

I’ve been using the “jumbo crosswalk” area here for years to pull Copenhagen lefts to switch from biking south on Naito to crossing over to the fountain (and Hawthorne bridge). Curious to see how that feel on tonight’s commute home. It looks like they may have kept that nice buffer area in the top photo.

It’s great to see a facility that legalizes the illegal behaviour that many riders practiced here. This facility is also a reminder that breaking traffic laws is often the safer option when riding.

What was the illegal behaviour?

Continuing straight into the park?

I’ve never made a left or right turn there.

Not trying to be a contrarian but I have been riding Salmon to Waterfront for over ten years. The new system blocks traffic back to 6th and now negates a straight shot where you could make all the lights. I hope it ends up safer so I guess a little slower will be worth it. It is easier on the last block for sure

Those crash stats are crazy. I shouldn’t be surprised. I’ve never had a problem at that intersection, but I’ve had far too many close calls at other dual turn lanes. When dual turn lanes lead onto a three lane road chaos reigns. https://goo.gl/maps/1hxLp I’ve seen so much stupidity turning right from Spit Brook to Daniel Webster southbound. *shudder*

It’s really nice to see how much better the street functions with the traffic light off, replaced by stop signs!!!

Vote Up0Vote Down  Reply
« Governor Kitzhaber, top legislators raise awareness of distracted driving
Get Legal: Being “nice” is dangerous and could make you at fault in a collision »