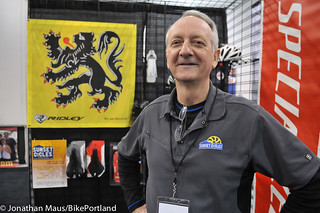 A shop just over the west hills of Portland is set to close at the end of October.

Sunset Cycles (15320 NW Central Drive) owner and founder Roger Colwell announced his retirement in a customer newsletter on Labor Day. Colwell opened the store in 2003 and expanded into a second store in Beaverton in 2011 (he closed that store a year later).

In a message posted to the shop blog yesterday, Colwell said owning the shop has been one of the most rewarding experiences of his life but now he’s looking forward to spending more time with his family and exploring Oregon’s backroads in his bike. “Ill miss the day-to-day interactions with customers who come in the store,” he wrote. “Seeing the look in the eyes of a new cyclist who rides off with a new bike is genuinely priceless.”

From now until October 31st, everything in Sunset Cycles is on clearance, including up to 35% on new complete bikes. Check out the shop website for more details.

Roger and crew sold me my Stumpjumper and I will be super sad to see them go. They have been my LBS and their service unparalleled. Unfortunately I’m gonna have to make the trip to UCycles more often 🙂

Surprised someone didn’t pick up the business from him and continue it on…maybe there was a debt issue or something…? Seems like a shame to close down a perfectly good operating (and assuming profitable) bicycle business.

Vote Up0Vote Down  Reply
« Unsafe driving claims another victim: Why these recent collisions matter
The $60 million map: Here’s what a street fee’s ‘safety’ money might pay for »