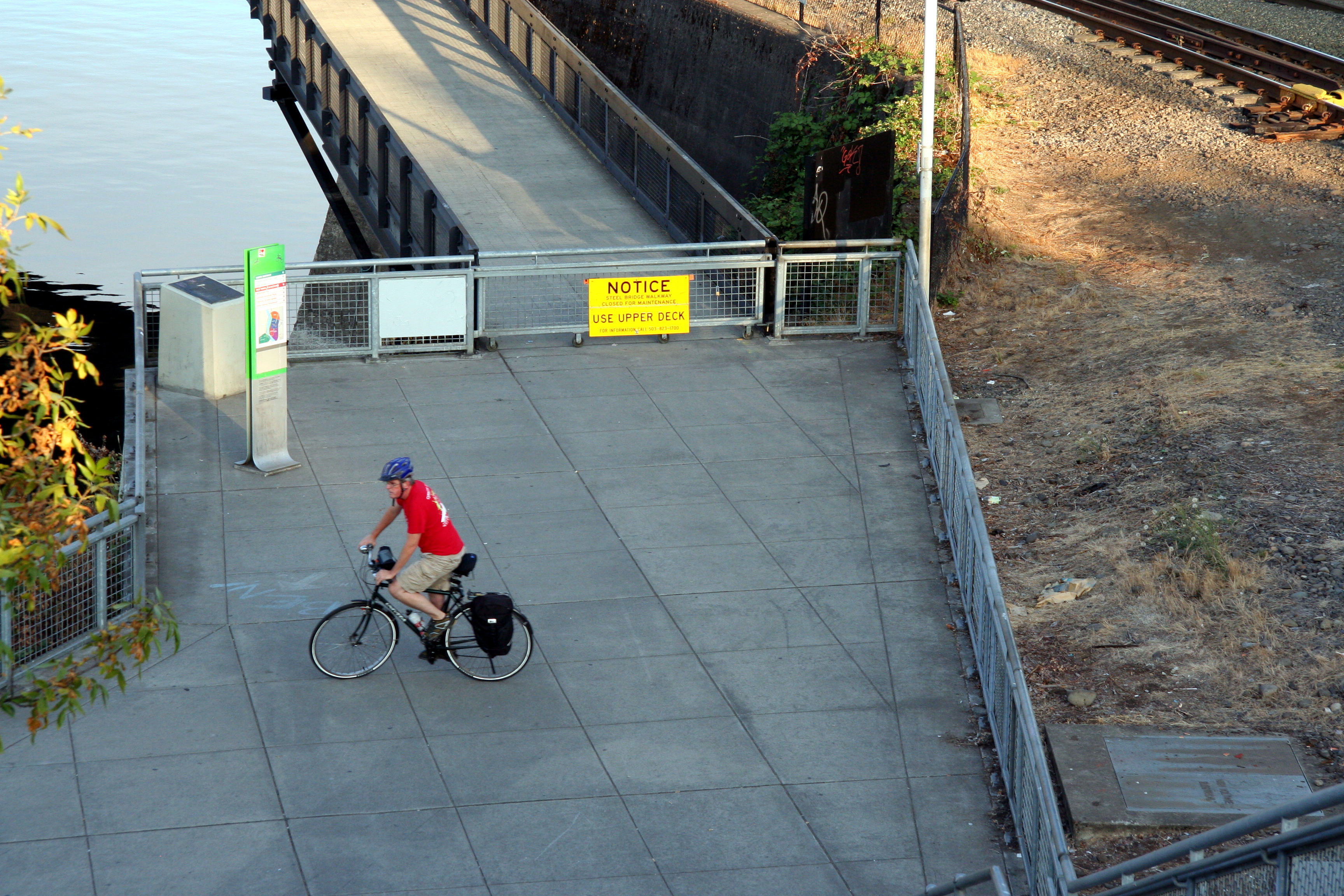 Update 2:20 pm: PBOT reports that the lower deck will reopen by 5 p.m. The original post follows.

If you usually bike or walk across the Steel Bridge’s lower deck in the morning rush hour, try another route on Wednesday.

It’s being closed at 7 a.m. for an inspection, according to the Portland Bureau of Transportation. PBOT added that it’ll announce the reopening, whenever that might happen, in a follow-up tweet from its @PBOTinfo account.

When a camera failure closed the lower deck one year ago this week, the bridge remained closed for four days.

The lower deck carries about 3,500 bike trips daily, and thousands more walk or skate it.

Both Jonathan and I will be away from BikePortland for most of Wednesday, so watch PBOT’s Twitter feed (or the comment thread below) for updates.

an inspection? what do they suspect is wrong with it?

Union Pacific owns the bridge and gets to do what they want. I suppose they think they are doing us all a favor for allowing the lower path to be built.

You do if you’re Chris Christie.

…so has PBOT put up detour signage for the bike traffic and so drivers understand? This is a planned problem, correct?

There’s a flashing light that indicates that the lower deck is closed on the east side at the intersection with NE Lloyd Blvd, which was working last night at least (when the bridge was also closed).

Not sure if there is any signage on the west side before the actual gate.

There is no signage on the west side, either coming from downtown or from NW – that is a major problem.

There was nothing up at the top of the bridge by the bike signal, no warning signs, no detour signs, and the permanent warning sign with flashers attached was not in operation. We had to ask someone traveling the opposite direction at the bike signal if the bottom deck was indeed closed.

Imagine if they required people driving cars to yell questions out of their windows at oncoming traffic to find out what route to take before committing one way or the other.

Did PBOT have no advanced notice?

If it was the top deck being closed (you know… where the real valid traffic is (oozing sarcasm) ) there would have been warning signs days in advance.

Sure this is UPRR’s bridge that they are magnanimously allowing the city to use it just seems that as a good neighbor they could stand to warn us of anything other than emergency maintenance.

Of course, as old as this bridge is, almost anything could look like a fall-in-to-the-river emergency, especially when train cars carry twice the tonnage per square foot versus a fully laden truck.

PBOT tweeted about the closure on the 11th, but some signage on the bridge would have been nice.

Wasn’t trying to justify that as their announcement. Just that they knew about it and somehow found that sufficient.

Even a miniature cardboard (laminated poster board) version of the official MUTCD construction zone road closure signs could be deployed within less than an hour (probably 15-30 minutes) if someone in PBOT thought it was worth the effort.

…what’s a tweet, young man? I guess I should pay my gas taxes by this tweet too!

I rode across the bridge at 615am this morning along side a full length Amtrak. If there was REALLY a safety concern, they wouldn’t have allowed the Amtrak train to cross.

File this one in the “we still have power over you” category.

Passenger cars weigh considerably less than fully laden freight cars full of lumber or other heavy goods. It is entirely possible that UPRR threw up a provisional weight restriction until a live inspection could occur.

This is a fairly common occurrence on deep rural routes that are freight accessible. A tiny 2 lane bridge may have experienced some weather event (flooding usually) and in an abundance of caution the local DOT derates the bridge for loads over 12,000lbs.

Slow news day. I just rode south on the east bank esplanade and crossed on the Hawthorne bridge – no biggie.

Nope, a route deviation of that magnitude is very much a big deal.

Notification of lower deck closures remains wholly inadequate. I’ve wanted alert signage installed on the west side for a long time. A good location would be in the vicinity of Naito and 9th to allow riders from NW to detour to the Broadway Bridge.

Would you say the same thing to drivers if they shut down the lower deck of the Fremont bridge without warning or signage? Oh ya. Just detour down to the Marquam, no big deal!

Words to live by:
Hanlon’s razor “Never attribute to malice that which is adequately explained by stupidity.”

I don’t think that either UPRR or PBOT is maliciously acting this way or even does these thoughtless things intentionally.

The more logical conclusion is that it simply doesn’t occur to them that bicycle and pedestrian traffic is not 100% recreational.
It must be a societal disconnect between “us & them” where the idea of relying on anything other than a car is as alien as breathing methane and eating diamonds.

Yes, a relatively small portion of society is inconvenienced but that doesn’t make it not worth warning about and trying to avoid.
“The needs of the many outweigh the needs of the few” does not morally nor ethically legitimize thoughtless abuse of minorities of any stripe.

Guest
Paul in The 'Couve

Although I also am annoyed at this evidence that simply shows that few at PBOT, City of Portland or really anywhere else give any thought at all to cyclists and that they really don’t see cyclists as deserving the same level of consideration and planning as motorists. I have a happier idea.

This is partly a result of one of the major, huge advantages of bicycles and we should find a way to exploit situations exactly like this! Cars are impossible heavy, wide and awkward with very poor maneuverability. What we are seeing in instance like this is that when you don’t plan for bicycle detours nothing bad happens! When you have unexpected detours and road closures with cars you get a jammed up mess of cars going no where. That isn”t simply because of the volume of cars. It is because of the lack of maneuverability and the sheer volume of space that cars take up.

The huge advantages of bikes, as mentioned on these pages before, is that turning around is simple, negotiating minor obstacles is simple, and the space required to ride one is 1/5 the width of a car. Even if 50 cyclist rolled up the gate at the broadway bridge this morning at the same time, they could all maneuver getting turned around and back underway in a few seconds. Try that with automobiles!

…I guess some enterprising advocate should try to organize a flash bike jam at these type of overlooked non signed work zones so that the bike traffic jams up an adjoining intersection or off ramp or two. (Just thnk’in out loud.)

From the west, encountering this closure represents sub 3 minutes of extra navigation/pedaling. I’d love for the collective of cyclists to spend energy on other things than this.