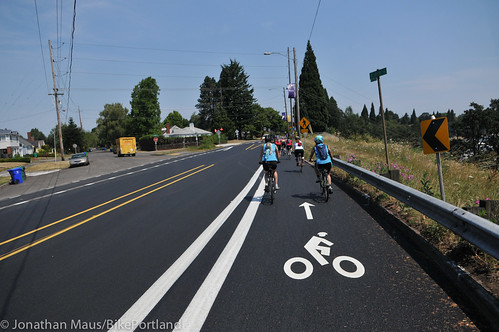 New and wide and buffered on Willamette Blvd near University of Portland.
(Photos by J. Maus/BikePortland)

In PBOT’s words their plans for the Willamette Blvd makeover included, “Making adjustments to make it more comfortable to people that are biking.”

On Friday I (along with about 150 other people in the “Policymakers Ride” which I’ll recap later) got my first look at the changes.

The new paving and striping is located between the main entrance to University of Portland (between N Haven and Fiske) and Columbia Park (N Woolsey). The new road is niiiice and smooooth, and the contrast between the black pavement and bright white bike lane striping makes a huge difference in safety and compliance (versus a bike lane that is worn away).

While the new paint is nice, it’s the width of the bike lane that makes most of the difference. PBOT has made the bike lanes one foot wider in the entire section, going from five to six feet. And at the swooping corners near U of P — where people frequently drive onto the bike lane and wear it away — PBOT has added another foot and a second stripe to “buffer” the bike lane.

Here’s how it turned out: 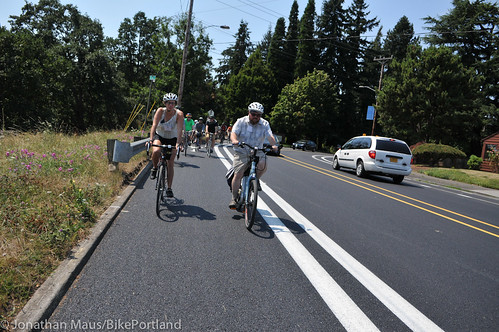 When a bike lane is six feet, it’s suddenly comfortable to ride side-by-side. This is PBOT traffic safety staffer Greg Raisman and Filmed By Bike founder (among other things) Ayleen Crotty. 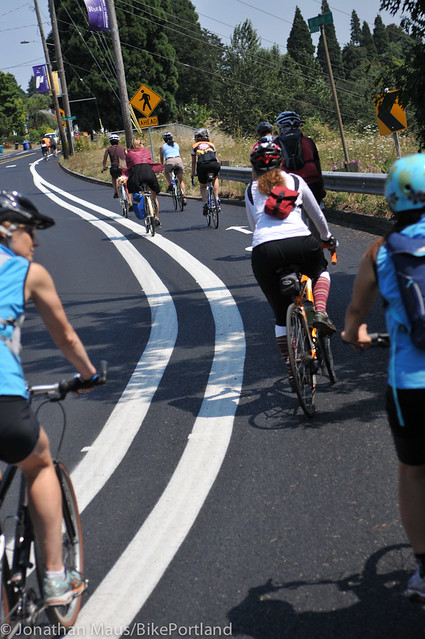 Trust me. These folks would never have felt
safe enough to ride like this prior to the new striping. 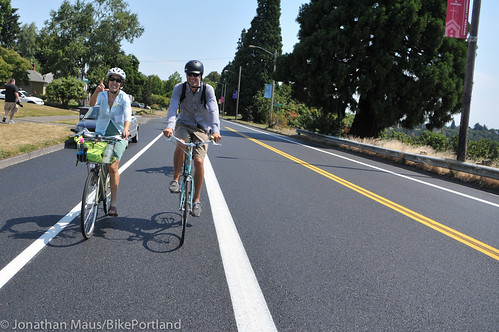 One extra foot and a buffer in the corners might not seem like a big deal, but on a bike the extra width is very noticeable. I was riding with a friend in the new section and I pointed out how we could easily ride side-by-side. Then, as we crossed into the old section, without even noticing, my riding mate dropped back about a half-wheel. With a five-foot bike lane, it’s not possible to comfortably ride side-by-side without the outside person riding on the white strip — which is unsettling to the rider and can also enrage people in cars.

The wider bike lanes are a welcome improvement; but I was most pleasantly surprised at the changes on the northbound bikeway as you approach the main entrance to U of P. Where there used to be on-street auto parking that created a serious pinch-point and gap in the bikeway, there is now just a nice, wide and buffered bike lane! 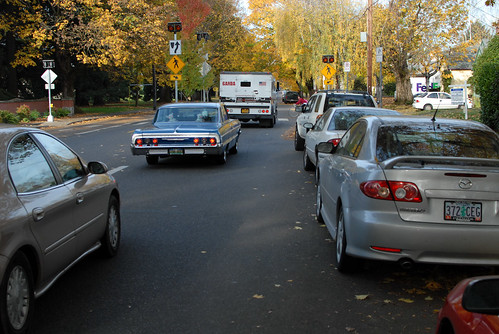 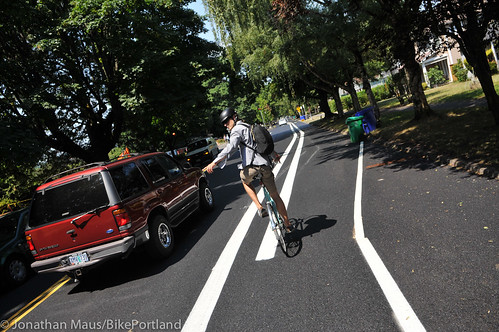 Looking north with U of P entrance up ahead. 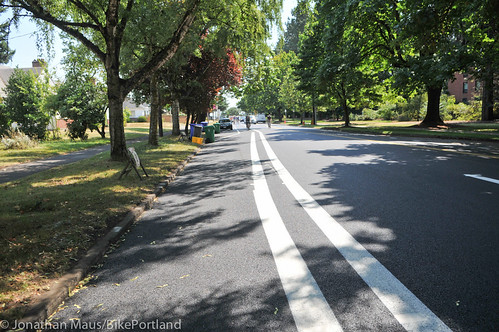 Looking south from where cars used to be parked.

(In the southbound direction near the U of P entrance there’s a bike/bus mixing lane and other changes I didn’t get the chance to see for myself.)

And initial reactions from users are positive. Here are two comments we received over the weekend on last month’s story…

It’s always nice to see PBOT update street designs to reflect today’s usage demands; but let’s not forget that there is still work to do in order to bring Willamette Blvd up to current standards. PBOT knows this, that’s why they set-aside planning money to create a “world-class” bikeway here several years ago (only to shelve the plan after a few residents balked at giving up on-street auto parking).

So, enjoy this little step of progress and stay tuned for something more substantial (hopefully) soon.

I’ll have to check it out tonight. Even though it is the most direct route, I quit using Willamette after too many dangerous encounters at the UP entrance.

Awesome and thank you.

The newly repaved section of 99E (McLoughlin) from Roethe down to Oregon City has new pavement and striping (yay!), but the striping seems inconsistent to me. Sometimes it’s double-striped as in the pictures above, but it often becomes single-striped.

Does anyone know what’s up with that? I suppose road width, traffic patterns, and/or the presence of driveways could be the issue — but I haven’t made a close study of it.

In any event, the whole of McLoughlin from downtown Milwaukie to Oregon City has now been re-paved and re-striped within the last few years. Once the obstructions caused by light-rail construction are gone, it’ll be a reasonable alternative route in the autumn when wet leaves make for slick bike lanes on River Rd. and Oatfield.

Yes, it was a nice ride along the new buffered section.

(?) PBoT: are there any plans to add reflectorized RPMs inside the buffer zone so the bikeway is more visible in the dark/ wet leaf pile period of the year?

6-ft lanes = “sweetheart lanes” (bike lanes that are wide enough for your to ride side by side with your sweetie.)

“Forget the damned motor car and build the cities for lovers and friends.” – Lewis Mumford

it’s better, but they still failed by leaving the unused street parking in place…

not a win, still a loss, but still better…

Sometimes people seem to feel compelled to ride in the buffer areas — going into downtown from the Broadway Bridge, I always note the many people who ride in between the narrow striped area rather than to the right of it.

Wow, they didn’t waste any time with this.

heh, would love to see this treatment on SE Milwaukie from Powell to Sellwood.

Awesome news. What about the southbound approach to the UofP entrance? That was THE most dangerous section in the past where I lost count of how many times I and my fellow riders have been pinched off by staying in the lane through there.

shift into a shared lane in the turn lane/bus pocket

I look forward to riding this on Thursday evening to the open water swim that happens under the Saint Johns Bridge. This should rock.

How’s the community reaction? Any attacks on bikers yet?

Vote Up0Vote Down  Reply
« How to get more biking advocates to ‘show up’
Job: Service Manager – Athletes Lounge – FILLED »