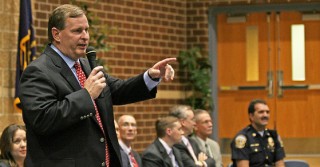 Though the flow of gawkers from other city governments to Portland may have ebbed a bit, our city still draws its share of leaders from around the country to see our streets in action.

But next month, Cycle Oregon is turning that tradition on its head: at the suggestion of Portland Bicycle Planning Coordinator Roger Geller, it’s bringing the mayor of Indianapolis on its 10th annual Policymakers’ Ride (a.k.a. the Visionary Voyage), so one of the country’s bike-friendliest mayors can offer insights to his counterparts here in Portland.

Here’s an amusing passage from a column this week in the Indianapolis Star, about Mayor Greg Ballard’s trip:

This isn’t a column about how Indianapolis is so far behind the West Coast’s hipster mecca.

What Indianapolis has that Portland doesn’t is a better network of downtown bike lanes.

“Mayor Ballard really has a good story to tell with the Cultural Trail and the development of the bike lanes,” said Roger Geller, bike program coordinator for Portland’s Bureau of Transportation. ‘And he’s tying it to economic development.’

Geller is the one who invited Ballard to the Policy Makers Ride.

“We thought we would bring in someone who is not one of the usual suspects. Portland is very blue. Indianapolis is very red,” he explained.

But in all seriousness, Portland hopes to replicate the success we’ve had with the Cultural Trail, a “cycle track” that is both separate and protected from the road and sidewalk. 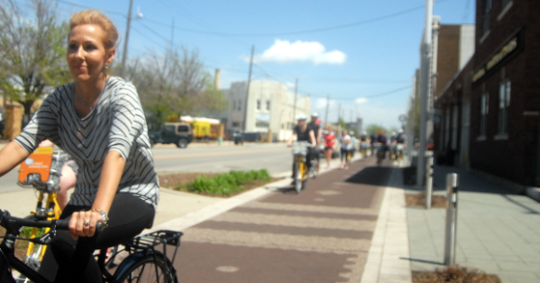 I had a chance to visit Indianapolis last month for my other gig and I’m not sure how long the city’s modesty will last. It was, without exaggeration, one of the best bicycling experiences of my life. The fully signalized Cultural Trail, sidewalk-level but generously wide and physically beautiful, creates a comfortable loop through a downtown that reminded me of what the hollowed-out core of the nearby Rust Belt city I grew up in would look like today … if, a few years ago, everything had suddenly started getting better.

Riding one of the 250 new Pacers Bike Share bikes, I saw locals doing one of the things I love about Portland that’s rare in most of the Midwest: running into acquaintances on the street and stopping their bikes to chat. Businesses and residential buildings were popping up all along the network, all boasting of their access to the new bikeway. As I parked my bike, one man who might have been homeless stopped me to ask about the system. I told him that for $80 a year, someone could pick up a bike from any of the stations for free, ride it wherever they needed to go and drop it off there.

“Anywhere you want?” he said, in awe. “Sometimes they actually come up with good ideas.”

As for Mayor Ballard himself, a retired Marine who inherited the Cultural Trail project from his Democratic predecessor but wholeheartedly embraced its completion (and started biking himself as a result), he sometimes seems confused about the attention he’s gotten from the bike world for pursuing a policy he sees as good economic sense in a world where cities compete mostly by being pleasant places to live. 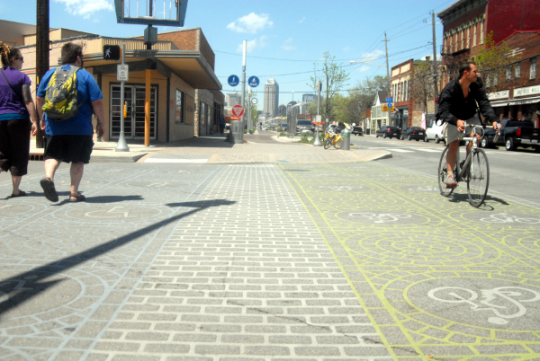 But maybe that matter-of-fact attitude about the economic benefits of bike infrastructure, which is now mainstream in many U.S. cities, is the best way to make it part of the political conversation here in Portland.

The Policymakers Ride is attended by a bevy of bigwigs from around the region including elected officials, top-ranking bureaucrats, planners and advocates. It’s sponsored by Moda Health, Travel Oregon and Travel Portland with the goal of “imagineering” a Portland project in the planning: the country’s first Scenic Urban Bikeway. When we last covered this concept, the proposed route was the unnamed riverside loop created by the Steel Bridge, Hawthorne Bridge, Waterfront Park and Eastbank Esplanade.

The ride is closed to the public, but we’ll be there to cover it. Stay tuned.

— Learn more about the Policymakers Ride in our archives.

Thanks for covering this, Michael. It is great to hear that the Indianapolis Cultural Trail “was, without exaggeration, one of the best bicycling experiences of [your] life”! I had heard it was good, but now I REALLY want to experience it!

I’m so glad that Roger invited the Mayor to come. It will be good to have “our people” hear from him.

Maybe this “Visionary Voyage” will impart some VISION and political courage to our leaders and planners.

I won’t be holding my breath but one can dream.

As you know we’ve got a great video on The Indy Cultural Trail. But also did a profile of Mayor Ballard that goes beyond bikes: https://vimeo.com/66542211

Good stuff, Clarence. The video of the ICT itself is linked above, and viewable here:
http://bikeportland.org/2013/06/12/inspiration-from-indianapolis-88328

1) Let’s get Mayor Ballard in front of the PBA while he’s here.
2) The ICT is, unfortunately, a perfect example of what was done wrong on SW Moody St — no contrast in color between the bicycle and pedestrian areas of the path. Same goes for the new Tilikum Crossing. If bikes and peds are going to be on the same horizontal plane, this feature is essential for creating a safe, comfortable and intuitive environment.

I could be missing something, Ian, but I think there’s actually quite a bit of color contrast on the ICT. You can see it in both of the photos above (at both sidewalk and crosswalk level). And you can also see, in the top photo, people running in the area that’s theoretically for bikes. Personally I thought this worked just fine; just as you’re never going to keep all bikes off the transit mall, you’re never going to keep all feet off a raised bikeway. I can see a potential for problems, especially for older folks or people with disabilities, but I didn’t experience or witness any.

Michael: My apologies. I meant to say that the color/substrate separation on the ICT is what we are lacking on recent facilities like SW Moody, which has only the occasional bike and ped symbol (which has low contrast with the light colored concrete). This was meant to be praise for ICT and other trails like it.

My problem with this article is: Ballard had almost 0 leadership in developing the ICT.

“Though the flow of gawkers from other city governments to Portland may have ebbed a bit, our city still draws its share of leaders from around the country to see our streets in action.”

In my experience, this is not true. As the official program hosting those “gawkers”, business is good and growing all the time. In fact, what’s most interesting is the increased flow of international visitors in recent years.

Over at First Stop Portland, we were happy as heck to host Mayor Ballard in all his domestic glory–in 2012 and last week.

Vote Up0Vote Down  Reply
« Dogs and bikes: A ‘Puppy-Palooza’ inspired photo gallery
PBOT ad campaign: ‘This is why drivers should slow down’ »