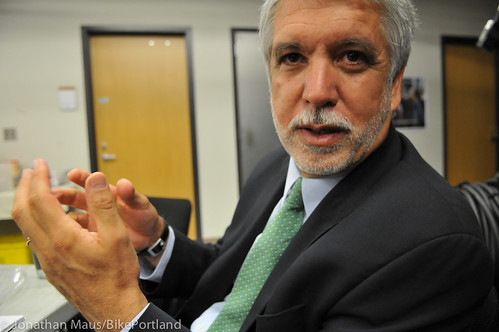 Colombian politician and noted urban livability expert Enrique Peñalosa. (From an interview I did with him on May 14, 2012).
(Photos J. Maus/BikePortland)

Our biggest story of the week (by far) is Michael’s analysis of how development policies in the central city have impacted housing prices and mobility. The post has spurred a robust conversation thread that has recently been joined by Chris Smith, a City of Portland Planning Commissioner, veteran neighborhood activist, and respected voice on transportation and land-use issues.

“Road space is the most valuable resource in the city. it’s more valuable than if we were going to find oil or diamonds underneath. So, how can we distribute this road space between pedestrians, bicycles, public transport and cars? This is a political decision, this is not a technical decision.”

The post also came just one day after PBOT Director Leah Treat raised a few eyebrows for her response to a citizen question about how/if the City of Portland coordinates its transportation and land-use planning.

With all this swirling around my head, I remembered a conversation I had with livable streets advocate and politician Enrique Peñalosa in May 2012. Penalosa is the former Mayor of Bogota, Colombia known in planning circles for sparking the global “ciclovia” open streets movement and implementing bold transportation reforms. When I realized Penalosa is now running for President of Colombia, I figured it was definitely time to put all this together on the Front Page.

Peñalosa was in Portland in 2012 to speak at an event hosted by the Portland State University Urban Planning Club (you can watch his full speech here). Before his speech, I nabbed a sit-down interview with him backstage. For whatever reason, I never got around to sharing that interview but I recorded it and I’ve held onto the audio. Listening to the interview again, I felt it was still relevant and inspiring enough to share today — especially in light of this morning’s disappointing news about the 20s Bikeway.

In snips of our conversation I’ve shared below (edited for clarity), Peñalosa touches on a new type of density, the future of close-in suburbs, cars, parking and more. (I’ve interspersed the interview excerpts with photos and slides from his presentation.)

I asked Peñalosa: “Does anything strike you about Portland is doing in terms of building a city for people, not for cars?”

“Well, you have giant roads. Highways through the city. I think Portland has done wonderful things like taking down the Harbor street and making the river park. And I like trams [streetcars] because they take space away from cars. I prefer trams to subways… But still I think you can do the same or more with buses for much less price…

But clearly… even though downtown Portland is getting better and better, there is still an enormous amount of parking. When you have surface parking, clearly it shows that you have low density. This is an indicator. Whenever you can afford to have low density it’s because the price of the land is too low and the demand for uses is too low. But this is fine. 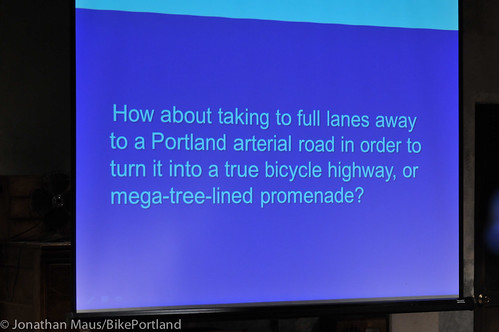 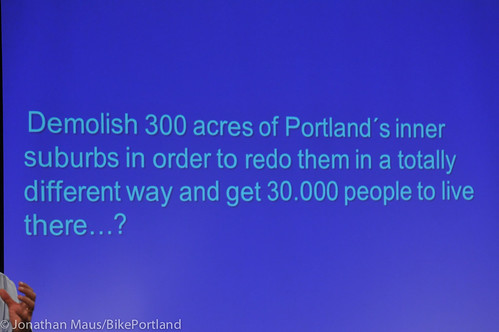 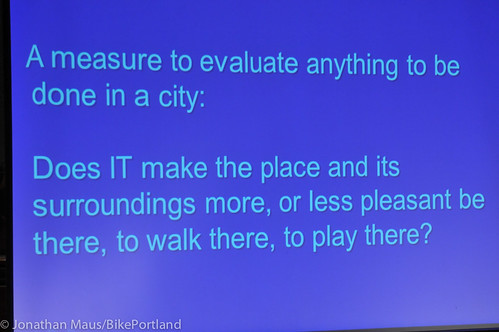 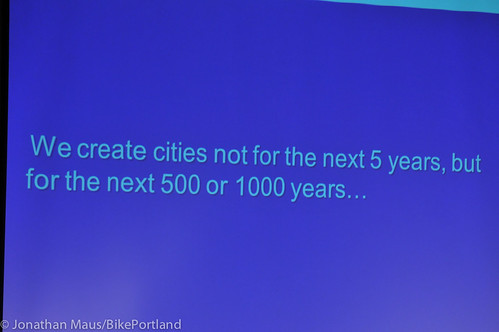 He then went into the part of his answer that I felt was related to Michael Andersen’s article:

“My worry however is that — not just for Portland but for other American cities as well — is that we have to create something different. We need to find a way to increase density in the inner suburbs. When we talk of density it cannot just be to create a little Manhattan. This is fine for young people or people without small children; but that’s not for everyone…

We have to demolish 3, 4, 500 acres just as an experiment to re-do suburbs in a completely different way. A city just criss-crossed with bikeways. Maybe we can do something that is very radical. Take half the space away from cars to do pedestrian and bicycle highways. For example, you have light rail going into suburbs with very low densities.. In certain ways that’s wasteful because you could have much higher densities…

We have to invent a different way of doing high-density where children will walk into pedestrian streets, there will be hundreds of miles of greenways, parks, streets just for buses and bicycles. At this time we have only two alternatives: suburbs or downtown. We need something that isn’t one or the other. This new density won’t be the traditional downtown because clearly that is not an alternative for people who live in the suburbs. People who live in the suburbs want safe spaces for their children. They want green. We need to find a way to transform the U.S. suburbs into high density environments in a way that keeps the green. I think this is possible… 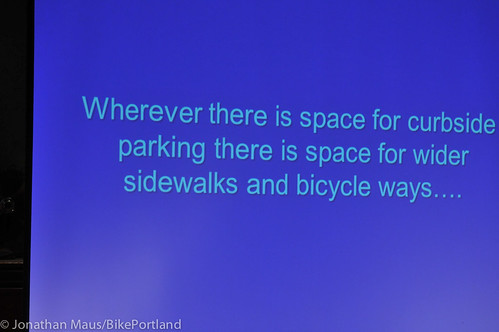 A slide from Penalosa’s May 2012 presentation in Portland seems quite fitting given the news about the 20s Bikeway Project.

Then I shared with him that in Portland we don’t appear to yet have the political will to upset the status quo by creating streets with more space for cycling, walking and other uses beyond just driving. (This is the exchange that I felt has some relevance to the 20s Bikeway discussion.) Here’s how Peñalosa replied:

“We must understand there is no such a thing as a natural level of car use in a city. It’s not like if we give more space for cars we have less traffic, or if we have less space for cars we will have traffic. No. Road space is the most valuable resource in the city. it’s more valuable than if we were going to find oil or diamonds underneath. So, how can we distribute this road space between pedestrians, bicycles, public transport and cars? This is a political decision, this is not a technical decision.

We have to be able to do some radical things. If they were able in Manhattan to take half the space away from Broadway to give to pedestrians and bicycles — Manhattan! Which has a density fifteen times more than Portland — why can’t they do that in Portland? … For example, you could do a bicycle highway where you take two lanes away to give to bicycles on a very arterial road that would allow bicycles to really go.

… There are three stages to doing this. First is to imagine it; second is to design it; and third is to just do it.”

When I asked him how he thinks New York City was able to do such radical street transformations, he said there are two things every city needs to make change happen: activists and non-profits pushing big ideas and an elected leader who is “somebody willing to take some risks.”

I have a feeling we’ll be hearing much more about Colombia if they elect this man as their next president.

Thanks Jonathan, for this reminder of where our heads and hearts should be.

If nothing else, can the City at least hire some mimes to direct traffic? Seriously.

Quote: “Then I shared with him that in Portland we don’t appear to yet have the political will to upset the status quo by creating streets with more space for cycling, walking and other uses BEYOND JUST DRIVING.”

Sensationalism. Almost all streets in Portland are used by cyclists and motor vehicles. (There may be a few used only for bikes. Are there ANY used only by motor vehicles?)

“Demolish 300 acres of Portland’s inner suburbs?”
I liked the rest of the interview, but that was a shocker. I would think that his vision of greater livability could be (indeed must be) accomplishable without so much willful destruction. Le Corbusier meets Mt. Hood Freeway?