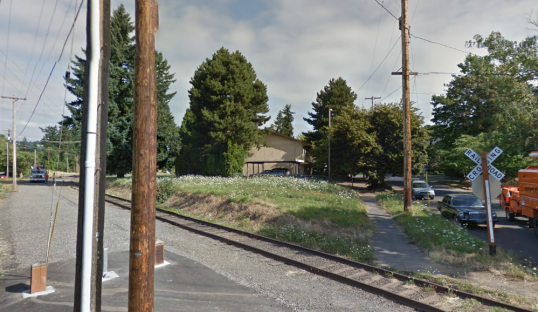 The Sellwood-area neighborhood association is looking for ways to improve this triangular parcel along a new stretch of the Sellwood Corridor path.
(Image: Google Street View)

The Springwater Corridor is finally preparing to connect most of the way through the Sellwood neighborhood, but nobody’s decided yet what the land alongside the path will look like.

Along with the necessary land to connect the mixed-use path between Southeast Umatilla street and 13th Avenue, Metro acquired six adjacent parcels that’ll become public land, managed by the Portland Bureau of Parks and Recreation. It’s great news for the Sellwood-Moreland Improvement League, the local neighborhood association — but they’re looking for public input on what to do with the new parkland.

“In neighborhood meetings, proposed uses for the land have included restoring native landscapes, creating wildlife habitat, creating community gathering spaces, preserving passive open space, incorporating edible landscaping, and recognizing the area’s historic significance, among other values,” SMILE wrote in a news release last week. While the group seeks public input on the emphasis for all six public land parcels, initial work will begin with a demonstration project on the triangular site located between SE Linn and Marion streets at 9th Avenue. Through a survey and two public meetings, SNAC’s Sellwood Gap Working Group and PP&R invite the broader community to provide input regarding priorities for the use of this land.”

Here’s a Google Street View, looking north-northwest from SE Linn toward Marion along 9th Avenue, that shows the parcel that’ll be the site of the “demonstration project”:

To share your thoughts, get involved or just learn more, you can take the survey on SMILE’s website or email comments@sellwood.org. You’ve got until March 31.

Work on the trail, which is funded by voter-approved property tax measures, will begin in the next few months.

Utility pole in the mup. Someone WILL utilize it to crash into, sooner than later.

I think that’s distorted somewhat by the angle of the photo. It’s definitely not right in the middle of the path.

Plumb it for water and facilitate its use for community garden. The neighborhood immediatly to the south, Garthwick, has long fought against the continuation of the trail fearing that homeless and undesirables would infiltrate their neighborhood. Looking at the people camping along the river and the hard core homeless along the springwater out east, their concerns are justified. Create a space that encourages people with forthright intention to occupy the space during daylight hours with no amenities to support overnight stays.

Except the segments you mentioned are all isolated from homes. This section wouldn’t be. I think that would discourage a lot of transients hanging out there.

Throw in a couple brew pubs and a New Seasons.

I will design/install that pump track for free………