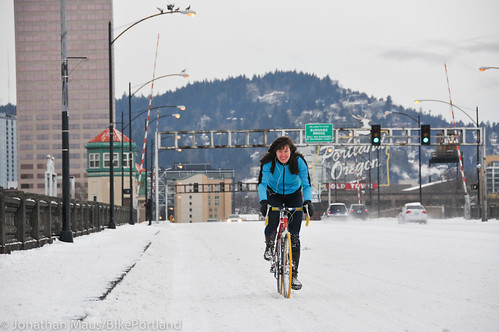 This woman had reason to smile. The sun popped out and the roads were nearly empty in and around downtown as she rode over the Burnside Bridge.
(Photo by J. Maus/BikePortland)

With yesterday’s storm finishing up over night, we woke up to several inches of snow covering Portland streets. Before the next storm makes it way to us something this evening, I headed out today to see what was going on.

With many businesses and all public schools closed for the day and tons of people staying home from work, the roads were quite calm. Residential streets that had little to no auto traffic and that don’t get any official plowing attention were difficult to ride on; but larger streets were relatively easy to navigate. Of course, I had to take the lane in order to stay out of the powder sections; but other roads users were much more calm and courteous than usual.

I ride side-by-side with a woman on N Vancouver Ave, chatting pleasantly as people drove their cars slowly behind us and waited for a large opening to slowly go around. Same thing happened on NE Martin Luther King Jr Blvd, where I took the right lane and people simply drove by in the left lane. 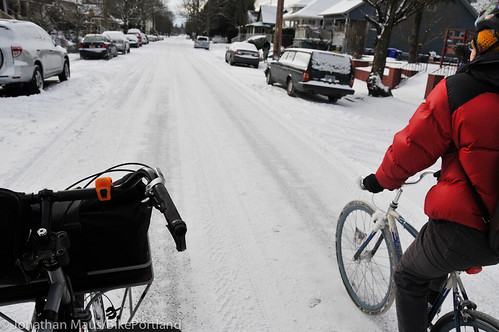 Calm enough on Vancouver to ride two abreast outside the bike lane.

I stopped to check out the Lloyd District and noticed that the new bike lane NE Multnomah St. hadn’t been plowed at all. There were a few inches of fresh powder to negotiate and it didn’t help that in front of the Lloyd Center Tower, valets parked cars and scooped snow from the sidewalk right in it. 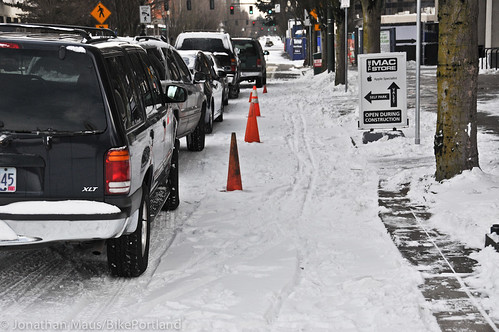 It was smooth sailing from the Lloyd, along NE 12th, then back toward downtown on Couch and the Burnside Bridge. Once on the bridge, I even noticed a guy who was using a hand-held snowplow to clear off the bike lane! 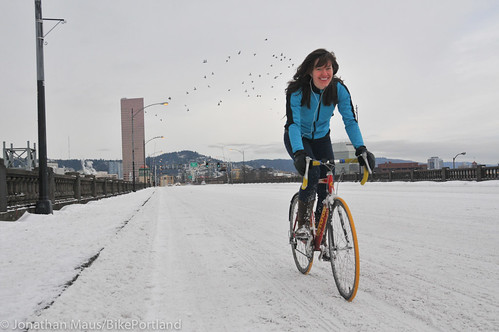 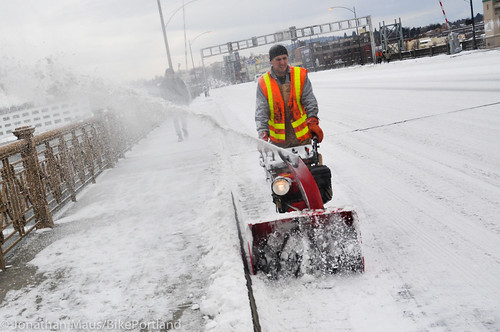 As for “sneckdowns” — a term popularized by our friends at Streetsblog to show how snowy streets can illuminate how little space auto traffic actually needs (versus how much we devote to it) — I didn’t see much of that. I think it’s because so far our snow is too dry and the air is still too cold so it’s not melting yet. The only sneckdown I did notice was on an I-5 on-ramp where we clearly have room for a few cycle tracks… 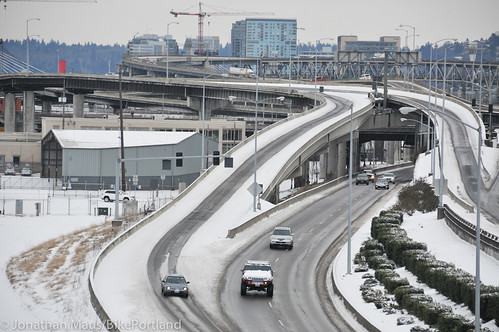 As for downtown, it’s pretty mellow with nothing interesting to report except for a bunch of white stuff all over the place. Here’s a shot of W Burnside just east of Third. 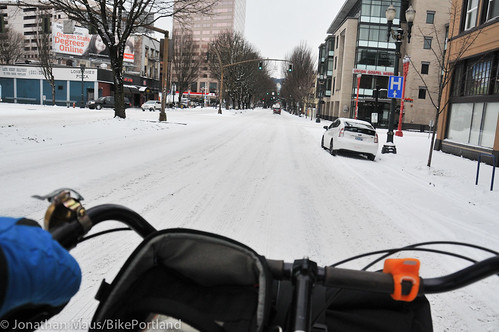 My social media timelines are full of people exploring parks with their mountain bikes and generally enjoying the day. A group from Joe Bike on SE Lincoln are headed up into Mt. Tabor later today for some riding action.

What are you up to on this fine snow day?

And just FYI, the forecast is calling for another storm this evening, so keep that in mind if you plan to travel around this weekend.

UPDATE: Several people have asked how I’m getting around so easily in these conditions. I’m riding the same bike I ride throughout the year — my custom Ahearne (see below). The only modification I’ve made is to lower the tire pressure for extra traction. It’s working out great so far… 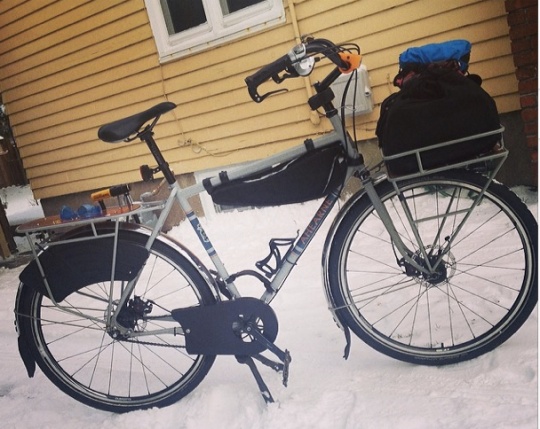 Snow plowing the bike lane. I was just pondering via facebook if we could create an winter storm #pdxtst snow plow bike crew that could build some freak bike snow plows – active powered of course. 😉

It would be tough. The guys I saw on the Hawthorne Bridge path this morning were having to work pretty hard with gasoline powered snow blowers. I’m thinking a tandem with the stoker powering the drive wheel and the pilot powering the snow removal.

can you build a freak bike lane cleaner?

That lovely lady you rolled down Vancouver with looks like Lale from the CCC!

she
Reply to  Saul T. Scrapper

That is Lale, or at least Lale’s bike and a lady with glasses like hers…

Jonathan Maus (Publisher/Editor)
Reply to  she

Thanks guys. Yes it was Lale. I knew she looked familiar but I couldn’t recall her name.

i live tweeted the #stumptownbirkenbinder this morning. rode over there from hollywood. so fun out there!

Where I’m from, that “hand-held snowplow” is just called a snowblower or snow thrower. Just like with lawnmowers, it is standard issue to have powered gear for large/difficult areas that you need to clear frequently.

Let’s pat ourselves on the back for those “protected” Multnomah bike lanes, now offering shelter from the wind and snow plows. Those cones are just the cherry on top, making sure the space is useless until Portland thaws out.

Let’s be real though, most of Portland is useless until we thaw out.

I am so grateful that nobody used a snowblower in my neighborhood. The day I see a neighbor use one, I’ll know Portland has gone over to the dark side.

Huh? Is it snow blowers specifically or power tools in general that you dislike?

What bothers me? It’s the exhaust fumes, air and noise pollution, lazy asses and lemmings. I own plenty of electric power tools, son.

#sneckdowns will show up better in the neighborhoods once more cars start driving around revealing blacktop. There you’ll see far more car-desire paths.

Mountain bike into work was pretty easy. Quiet streets made it quite pleasant, just a little slow. Didn’t really slide much. Tonight’s ride home should be fun with new snow.

We had a fun time on our Metrofiets cargo bike today! Nothing like towing the kids behind the cargo bike to the sledding hill! http://bit.ly/1lI7p4g

Bike snowplows are apparently very common in Canada or something…?

Another awesome day for riding. Took the semi-fatbike out this time (29×3″ front, 2.5″ rear) and laid some big fat tracks in Creston, Kenilworth, Brooklyn School and Brooklyn parks (and various other parts of SE). It was great seeing sooo many people out this evening enjoying the snow – sledding, XC skiing or just walking. Everywhere I went, people had taken over the streets and cars were a distinct minority.

Wanted to get out again later tonight but I’m too preoccupied with watching the Opening Ceremonies. (Hey, when do we get winter biking sports in the Winter Games already?!)

They’re trying for cyclocross, but I wouldn’t hold my breath on that one.

speaking of which i had some numbnut in a subaru wagon buzz me on hawthorne as i was returning home from a long day of work. snow turns some people who drive 4 wheel drive vehicles into @#$%ing idiots.

I had a pretty easy commute Friday, starting on SE Division shortly after 8:30am, which was partially plowed and graveled. I avoided too many side streets and passed the Division bus before too long. I don’t think more than about one car ever got near me between 52nd and Ladd’s Addition turnoff, and I passed the Div. bus eventually.
At the Hawthorne Bridge, I arrived just in time for a plow truck to lead the way along the bike lane or close to it. I was thrilled and proud to report that according to the bike counter, I was only number 89 over the bridge, as opposed to my typical 1100-1500. I’m riding a Specialized Rockhopper, but without snow tires. Just had to go slower.
Downtown, I decided I’d take the Max to Pioneer Sq and then a 9 bus to Powell rather than ride into the head wind of blowing snow. Lucky for me, the bus had just started it’s route and I had the entire bus to myself for nearly the entire ride.
Biking is always the smarter choice over a car in this weather, when you don’t know what kind of delay traffic might bring.

I rode home from work on Thursday afternoon (Feb 6), downtown to Alameda neighborhood. The Multnomah St. bike lane was the worst part. On 700x23c tires I was very cautious. Besides a gust of wind that caused my bike to slide once I had no problems. However, in the Multnomah bike lane, especially near the theater, my bike kept wanting to slide towards the curb, apparently because of the slope or maybe because of last year’s leaves that were still there under the snow. I also felt that the beige paint was slippery when I rode outside of the narrow bike lane.