Skip to content
Biking on and around Mt. Hood will get even better.
(Photos by J. Maus/BikePortland)

The Clackamas County Tourism & Cultural Affairs office has announced 10 projects that will split $200,000 in grant funding and seven of the projects support bicycle-related tourism. This news will surely continue the strong momentum for bike tourism in “Mt. Hood Territory” that we reported on back in July.

These tourism development grants are funded through Clackamas County’s 6% lodging tax which was passed by voters in 1992. It applies to all lodging receipts over $15 per day from county hotels, campgrounds, events, vacation home rentals, and other types of lodgings.

Here’s a look at the exciting, bike-related projects that will get a boost from these grants:

Meldrum Bar Bike Attraction & Events ($7,500)
This project is being worked on by the Oregon City Trail Alliance and it is spearheaded by the owner (Blaine Meier) and staff of of First City Cycles. It will improve and expand a progressive bike jump track at Meldrum Bar Park in Gladstone and a pump track in Oregon City. Total project cost is $68,000 and this grant will be used toward a feasibility study. Check out the video below for more info:


Estacada Cycling / Visitor Plaza ($30,000)
The “Bike Comfort Station” project will build a public plaza in Estacada “designed to attract bikers and other overnight visitors to the City and surrounding area.” The plaza will be adjacent to a public restroom and overnight parking and will include bike racks, an info kiosk, benches and signage. Expected completion in 2014. (Total project cost: $98,325)

Sandy / Boring Corn Cross ($6,000)
The City of Sandy wants to bring people out to a major annual cyclocross event in a rural part of the county. Their goal is to host a national-level championship race. This year’s inaugural Corn Cross event drew 268 visitors. (Total project cost $8,300)

Mt. Hood Moderate Lift-Served Mountain Bike Trail ($40,000 split between 2013-14 and 2014-15)
This project will create a new, “lift-served” bike trail in the Upper Mountain area of Mt. Hood Skibowl. Hurricane Racing is the project lead. They say this project will expand Skibowl’s biking options and allow them to open for more days in the season. (Total project cost: $83,500)

Mt. Hood Area Mountain Bike Clinic Series ($8,350)
This award will allow Otto’s Ski Shop to put on a series of weekend clinics that will, “introduce new and seasoned riders to both the Mt. Hood area riding opportunities and to the skills needed to enjoy Mt. Hood’s extensive mountain bike trails.” (Total project cost: $14,350)

Sandy Ridge Trail System Improvements ($30,000)
The Bureau of Land Management (BLM) will use this money to improve beginner-friendly biking opportunities within the Sandy Ridge Trail System, which has become a premier mountain-biking destination. Sandy Ridge had about 60,000 visitors in 2013 and this project will make the area more attractive to novice riders. (Total project cost: $72,260)

It’s important to note that the bicycle-centric nature of these awards didn’t just happen by accident. As we reported on back in 2011, Travel Oregon held a series of “Bicycle Tourism Studio” workshops with the specific aim to help Clackamas County identify its biking strengths and mold them into real, tangible tourism assets. The projects above are priorities that emerged from that process, showing the value of a strategic, statewide approach to improving bike tourism.

It’s this work by Oregon’s bike tourism staffers, advocates, and volunteers that led to a feature article highlighting its success in the current issue of Adventure Cyclist Magazine: 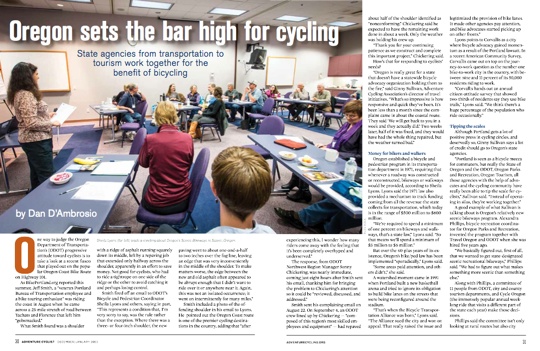 These grants are great news for Oregon’s economy and for bicycling in our region. Let’s keep the momentum going!

And the McIver State Park Hiker / Biker Campground Shelter design, as proposed, would seem to be a regional if not national model for “state of art” biker camp sites…from those that I have used. Some of the current best sites were “excellent” back in the 1970s/80s when their amenities were established.

This fall I was looking for a Clackamas County bike map online to plan a ride that weekend. The Clackamas bicycle map was only available in print version for $5. I emailed the web site contact at the county, and he confirmed the map was not available online due to budget limitations. Clackamas County didn’t get my tourism business that weekend because I didn’t have a map. Wish some of that grant money would have been allocated to making a map version available online.

Hi, Lila –
Sorry you had difficulty landing a Clackamas County bike map that day! For future reference, downloadable PDFs are available on the mthoodterritory.com website (http://www.mthoodterritory.com/things-to-do/outdoor-recreation/biking).

A limited re-printing is scheduled for the Bike It! map within the next year, and the Tourism offices still have a few on hand. Happy riding!

Excellent news! Ou area is starting to catch on to the economic benefits of riding on dirt.

Hopefully the Clackamas County Tourism and Cultural Affairs plans will align with their road division. They seem to take great pleasure in chip sealing / fog sealing some of the best roads leading to and around Mt Hood (Shipley, Marmot, Barlow Trail, etc). This makes for not so fun riding.