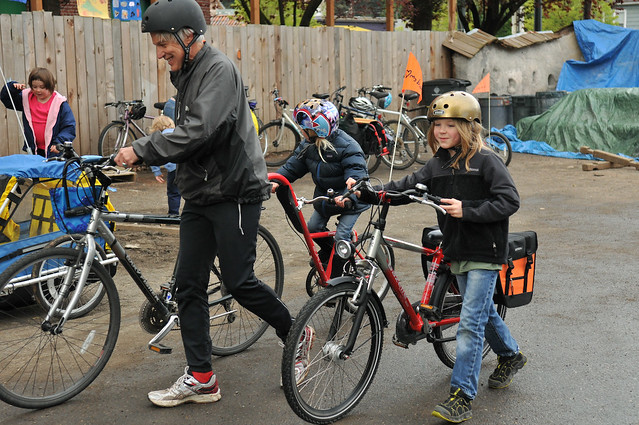 Slowly but surely, Portland seems to be edging toward its transportation goal for elementary schoolers: getting as many of them to walk or bike to school as the average American kid did in 1969.

For the last two years, progress has leveled off, just as the city’s goals for adult transportation have. But (much like workplaces) some local elementaries have been far more successful than others.

A pair of reports released this week from the city’s Safe Routes to School programs shows that 41 percent of Portland pupils either walked or biked to school in fall 2013, compared to about 12 percent nationally.

Much of Portland’s success, city Safe Routes manager Gabe Graff said Thursday, is due to the fact that Portland’s schools remain integrated with neighborhoods, while many faster-growing districts have built new schools on the edges of cities in an effort to save tax dollars.

Among Portland elementary schoolers who live less than a mile from their school, 56 percent bike or walk; nationally, it’s 35 percent.

In 1969, 89 percent of American elementary schoolers who lived within a mile of school walked or biked.

“Most of the elementary schools in our city were built around that time or before,” Graff said. “They weren’t built for the numbers of parents that are driving there, dropping kids off in their personal automobile that we’ve seen. … Once we get our numbers closer to the mode share we got in the 60s, then the pickup and dropoff around our schools will get more sane.”

As the map below shows, the Portland elementary school that gets closest to that target is Sabin in inner Northeast Portland, where 59 percent of K-5 pupils walk and another 15 percent bike.

In the map, schools where more than half of students walk or bike are marked in green. Those where fewer than 30 percent do so are marked in red. Click on a marker for more information: as you can see, many schools where biking and walking are less common have high bus ridership. (Though not as high as similar schools would have in 1969, when only 14 percent of students who lived more than two miles from school were dropped off in cars.)

Before we wrap up, let’s look at another map: the schools where the highest share of pupils who use active transportation to get to school do so on a bike.

Elementary schools where biking is most important to making commutes active

The 13 elementary schools marked in purple are the ones where walking might not be so common but (because of distance, street design, parents’ schedules or something else) more than 30 percent of active commutes happen on a bike.

In the whole city, there are two traditional elementary schools where biking to class is actually more common among K-5 students than walking: Llewellyn School, in Southeast Portland’s Moreland neighborhood just off the Springwater path; and Harvey Scott School, in the Roseway neighborhood, at Northeast 68th and Prescott.

The location of those schools might be a lesson for biking in the city in general: though biking for transportation is very common for local trips in the city’s innermost neighborhoods, it’s the next ring out — the neighborhoods built not in the 1910s and 1920s but in the 40s, 50s and 60s — where getting around on a bike is often the most convenient option, and the way to really transform a life.

Correction 1:20 pm: An earlier version of this post incorrectly described the funding for the city program. Most of it comes from speeding tickets and other traffic fines.

Richmond Elementary in SE is not on this map–any ideas why not?

It wasn’t in the city’s data, for whatever reason – the SRTS program started at just a few schools and has expanded to most but not all schools since. I’m not sure how many schools it skips; many of the small charters are missing, certainly.

While we partner with 80+ elementary and K-8 schools throughout the city (including Richmond), we survey only a sample (50) of those schools due to budget constraints. I’m afraid Richmond isn’t on our survey list.

Trillium is a charter school that draws kids from across the city, not just the surrounding area. This would have a big impact on the data, especially for elementary.

Neither of my kid’s elementary schools in inner SE Portland included on these reports. Too bad for missing data. I wonder if it has anything to do with the UP Brooklyn rail yard falling inside the school zones. Makes it hard to bike or walk to school in this area.

Our school in Beaverton has a huge driveway that cuts through the middle of the parking lot, which encourages people to drive their kids to school and makes for a very scary looking parking lot. I wonder if walking/biking could be increased by redesigning the parking lot to be a PARKING LOT for school staff, rather than a big drop off center. If people want to drive their kids to school, force them to park far away from school and walk the last 1/4 mile, ha ha.

What you’re referring to is “remote drop-off” which is actually an increasingly popular option to get kids more active; plenty of schools have pursued this — ChangeLab solutions has various toolkits if you want to look at any liability concerns, etc. Another option schools can take is the “early release” for walkers and bikers — creates a safer environment, with no cars allowed to enter the immediate area until after bikers and walkers have cleared, and as a bonus, makes kids want to walk or bike, if they can get out 5-10 minutes before the car-riders.

Incidentally, I’ve been known to ride helmetless on my single speed cruiser with my kids to school, and parents have told me I’m setting a bad example for them. Nevermind the example they are setting for their kids, driving a half mile to school everyday.

Gabe Graff, would you be willing to share year-to-year data? I’m the SRTS parent coordinator for Irvington and would love to have this info to work with.

Irvington is a new addition to our school survey, so we only have one data point at the moment. Sorry! You can view it compared to other schools in the cluster by checking out this PDF (http://www.portlandoregon.gov/transportation/article/477863) and scrolling down to the Irvington report.

I am willing to bet that the vast majority of kids who are riding their bikes to elementary school now will not fall into the “interested but concerned” survey bucket when they grow up. These programs are what will drive up the bicycling/walking mode share 10 to 20 years out.

You really need to look at all of the data to better understand the maps. All of the green markers are schools with small geographic coverage and few other obstacles to walking/biking. Sabin, for example, has 85% of respondents living within a half a mile, yet still have a chunk who drive. Chapman, a red marker, has over 50% outside of a mile (actually >25% beyond 2 miles, plus hills), but 100% of those within half a mile walk/bike.

It would be interesting to compare magnet schools like Richmond which effectively draw from the entire city. That’s our school and we bike 10mi from SW PDX to get there. (Yes I’m bragging.)

And you should. Plenty of parents use distances far shorter than yours as an excuse not to bike.

Do scooters and skateboards fall under the walking category? I see many scooters at Glencoe.

Ok i am reading the data and see there is an “other” category.

Strange, It seems like there should be more under the “Other” based on my observations. I wonder if parents are reporting as Walking since the kids ride while the parent walks along side.

As can be expected the more active schools are on the east side with flatter terrain and more sidewalk infrastructure. Our school in SW Portland, Hayhurst, has hardly any sidewalks close by. Plus, the district is long and narrow, which means that we for example, are two miles and a steep hill away from school. So even though both parents bike commute, our children take the school bus most days (at least they not going in the car). As we have to use dangerous Vermont with no sidewalks and bikelanes, I don’t feel comfortable letting them ride alone (PBOT is planning to put in sidewalk and bikelane soon). What did Leah Treat say about Maplewood? “they walk through the woods and then along streets with no sidewalks”. Yep, that’s pretty standard for SW Portland.
Plus, our school is half neighborhood, half magnet with kids from all over Portland, so they are more likely to drive.

I just wonder how much of “bus” is high school trimet bus, and school bus. Since PPS doesn’t have school bus stops within one mile of the schools except for students with physical disabilities.

When my son was in grade school he rode the school bus, but it was a longer walk to the bus stop than it was to the school. Walking to school required crossing one of the “top 10” dangerous intersections, where the bus would drop off farther away – but within the neighborhood. In fact we could wave to him on the bus as they drove by to drop him off nearly 1/2 mile away.

There are a few huge elephants in the room that are ignored in the reports: family income, percent of single parent households, number of parents working.

Safe streets and corridors obviously matter, but I’m very skeptical until we look at the other big predictors of family behavior.

1969 was also before Kabel TV and 24 hour news which causes modern day parents to be constantly afraid of the dangers their kids are in. Although times are as safe as in the 50ies parents see their kids in constant danger of “strangers” (aren’t we all strangers?), creeps and other people hiding behind the bushes, so they think they can’t send their kids on foot unsupervised to school. They feel like only their car is safe, even though car accidents are the number 1 death reason for kids, not counting the health problems caused by a sedentary life. See also http://www.freerangekids.com

I am not sure of the statistics exactly but I feel safer having my kid walk than bike to school. If they walk at least they are out of the road except in the intersections. They are not experienced enough to keep an eye out for bad drivers.

I’d be a lot more comfortable with my son biking to school (route has a couple of steep hills and twisting roads with uncontrolled intersections) if I saw more enforcement of laws that address cell phones use/texting while driving.