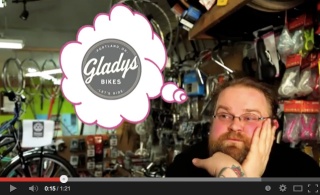 Two north Portland bike shops just three miles away from each other have opted for an embrace rather than competition. Gladys Bikes (3808 N Williams Ave #132) and Kenton Cycle Repair (2020 N McClellan St) have launched “Two Bike Shops in Love”, a novel marketing campaign that actually encourages customers to shop at another store.

During the week-long promotion, which runs January 18th through the 25th, when someone buys a product or service from one shop, they’ll get a coupon for 10% off at the other one.

Why would two bike shops owners — especially ones that are relatively close to each other and cater to similar types of customers — encourage people to shop at a store other than their own?

“We like each other,” is the simple reason given by Gladys Bikes owner Leah Benson. Benson and Kenton Cycle Repair co-owners Rich Walker and Starmichael Bowman met several years ago and have stayed in touch since opening their respective shops.
Here’s more from the press release:

We admire the work that each other’s shops do.

The guys at Kenton are really excited to see that Gladys is attempting to create a welcoming bike shop that caters first and foremost to women bicycle riders. Also, they think that Gladys Bikes’ Saddle Library is totally awesome and wish that they had come up with the idea first.

Leah has a lot of admiration for KCR’s approachable, affordable and spot-on service. She thinks you’d be hard-pressed to find more a passionate and friendly bike mechanic than either Rich or Star. Additionally, she thinks it’s cool that they also build custom frames and racks at super reasonable prices.

And they even made a sweet little video:


The owners figure that as small shops with no marketing budget, they have more to gain by promoting each other rather than competing. And, on a less serious note, Benson says, “This promotion allows us to laugh at ourselves and have some fun. And sometimes that’s all the reason you need.”

This is a good idea. Kenton Cycle Repair is my local bike shop and they have been good…good for them!

I love that video!

I think this is so cute and awesome! I love the idea of cooperative promo work.

This ad campaign is super cool and fun. I own Block Bikes PDX in St Johns, the reality is almost all of us in N Portland(ish) work together. I have some bikes from Revolver, that fit in my shop better than theirs now. I often refer customers to Revolver, Kenton Cycle Works, or UpCycles to find what I don’t have. I feel honored to have such great shops in the area to work with. All bike shop owners I know want to promote cycling more than make money.
building your bike love

I think the URL for Kenton Cycle Repair may be wrong. Try this instead – http://kentoncyclepdx.com/

Kenton Cycle Works is a great bike shop and Rich and Star are great people. The shop has been a great addition to the neighborhood.

When I plan to have a flat tire … I always try to have it near a good shop like Kenton Cycle Repair. 😉

As for marketing awareness…this is a super smart guerrilla marketing idea…BikePortland and other press sources will cover it and for the cost of a few 10% discounts.