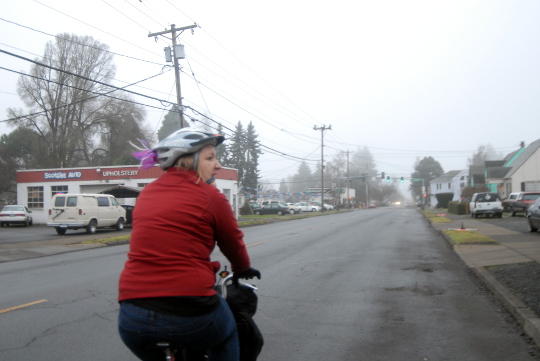 Shelley Oylear, the only public employee in Washington County with the word “bicycle” in her job title, is the 36-year-old queen of having feet in two worlds. And with a new six-mile off-road path just opened and three miles of new curb-protected bike lanes in the works, her diverse background is paying off for the people of the metro area’s west side.

“I guess I’ve always been a little bit of an adventurer,” she said.

Oylear is heading into the third yearof her biggest adventure so far: she’s the first bicycle and pedestrian coordinator for Washington County — a position many large U.S. cities don’t have, let alone suburban counties. 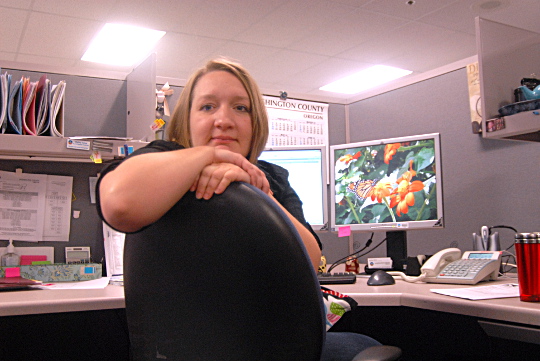 “There’s a lot of solutions out there for urban areas, a lot of ideas, but we get to be creative about trying new things,” she said. “The engineer in me loves the problem-solving.”

In a county that’s booming the way Washington is, Oylear’s experiments don’t have to wait long before being tested on the street. Part of her standard routine, as she makes her daily commute into Hillsboro from her home in North Portland’s St. Johns area, is to deboard at various MAX stops with her folding Brompton bicycle and ensure that the county’s ubiquitous construction sites are leaving conditions safe for biking. 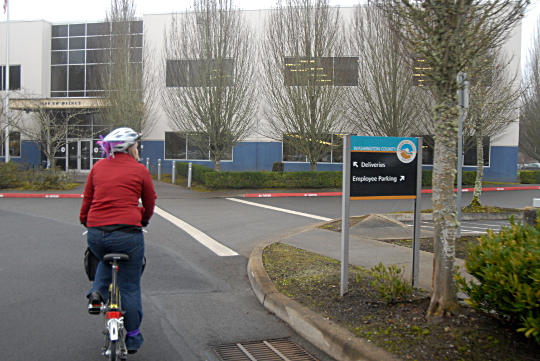 Oylear moved to Portland in 1998 to finish a college degree at Portland State University. She had been paying her way through Oregon State and was already scoring work in Portland amid the metro area’s previous economic boom, doing civil engineering and survey work on subdivisions and parking lots. (“Not very interesting,” she recalls.)

Then she took a job at Clark County’s downtown Vancouver office and, looking to save money, started biking to work across the Interstate Bridge. The experience, which she said involved some of the greatest sunrises of her life along the Columbia Slough path and also a Hayden Island car-bike collision, awakened her interest in using bicycles as transportation.

After several years in private-sector civil engineering, she took the Washington County job in 2010. It was the brainchild of county land use and transportation director Andrew Singelakis, who had just arrived from Tucson’s bike-friendly transportation department and wanted someone who could speak not just the language of planners but the language of traffic engineers. 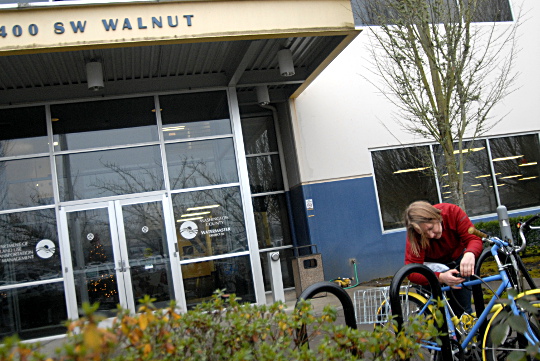 Working from a cubicle next to the county engineering department, Oylear has thrown herself into that task, building relationships and tracking every detail of new projects.

Engineers, she said, “are going to always say, ‘No, because of A, B, C.’ If you figure out a way to address the concerns up front, you’ve taken away some of those automatic ‘no’s.”

Oylear says she’s proud of Washington County for its “let’s get it done” mentality, for a stability and transparency in decision-making that she says appeals to businesses, and for being unafraid to tell citizens that the government can’t provide new services (additional police patrols, for example) without getting new revenue.

The county uses property taxes to raise $35 million per year for transportation projects of countywide significance, including a $5 million “opportunity fund” that is often used to match Metro and state grants for biking and walking projects. With major help from the county’s parks budgets, it’s adding up to a series of breakthroughs for Washington County’s off-road trail system, including the completion of the Westside Regional Trail and a planned connection to the Waterhouse Trail. 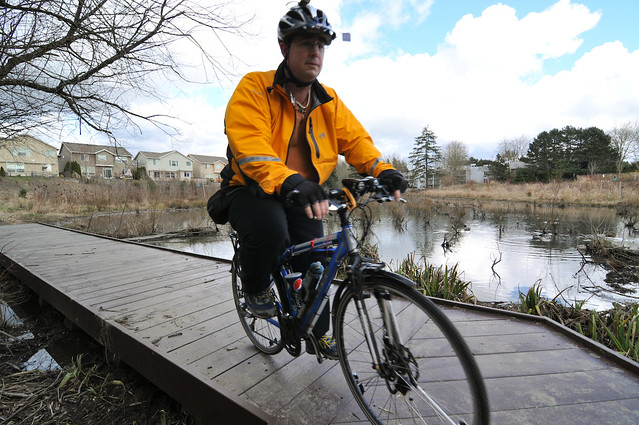 Activist Jim Parsons rides between subdivisions on a 2011 bike trip from Beaverton to Tualatin.
(Photo by J.Maus/BikePortland)

Then there are the challenges of working in Washington County: the vast distances between Oylear’s projects, the region’s huge diversity of bike users, and — most frustratingly to Oylear, it seems — the sense that people don’t seem to express much interest in anything their government is doing.

“I don’t know whether it’s people are too busy and they’ve been fine with the way things have been going in the past and they don’t have any issues, or they don’t know how or when,” she said. “The group [of bike users] is so diverse, how do you find a place for people to plug in?”

“If we can engage them, it’s a good day,” she added, a little sadly.

The idea of being unplugged from one’s community is especially alien to Oylear, who in her off-hours is active with her neighborhood association and is part of the small group of activists who’ve planned, agitated and gathered support for a North Portland Greenway running from St. Johns along the east bank of the Willamette River to the Rose Quarter area, back in Portland.

“I like to be able to go back to my neighborhood and advocate,” Oylear said with a smile, sitting in her Hillsboro cubicle. “If I lived here, I’d have a conflict of interest.” 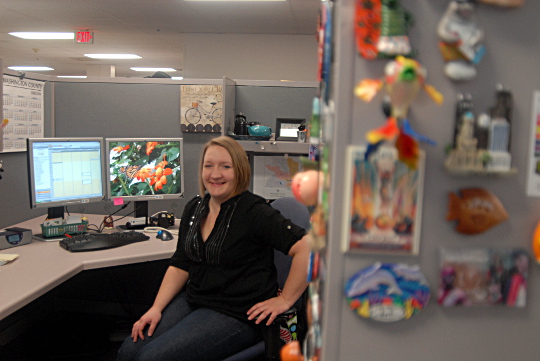 “the region’s huge diversity of bike users”
This seems like potentially a strength. Or at least it might be a way to avoid or do an end run around the epithet of the bicycling community that some in Multnomah County like to use.

Someone’s going to say it: U-lock!

Nah…We’ve got that same diversity out in far East Portland. Take a ride east of the i-205 and see what that diversity gets ya.

Though I do got to admit, I’ve worked on jobs recently in Forrest Grove and was quite impressed with the lanes there and the lanes from the Hillsboro Max to North Plains as well (though they were under construction when I passed through there last). Keep up the good work.

Shelley does fantastic work in Washington County and we’re lucky to have her!

As a neighbor, a friend and a fellow member of npGreenway, Shelley is focused, imaginative and a great advocate who walks the talk about community and transportation choices. Knowing Shelley has always been a pleasure, and her energy and stamina amazes me.

One other thing — Michael, I believe there is a slight error in this article.

There is no particular reason that NACTO design guides would be “of little use” in the places you listed. Urban areas can have great designs, whether incorporated or not.

The only reason these places have had such terrible design is because the County has treated them with the same shoddy standards applied throughout the county, rather than treating them like urban centers.

But in fact, both Aloha and Raleigh Hills are designated as 2040 Town Centers by the Metro 2040 Growth Concept (which means they’re supposed to have pedestrian oriented designs that are not far off from the NACTO guidelines). Those designations are too often ignored, unfortunately; look at the 185th expansion from TV Hwy to Kinnaman for example, where little to no consideration was made of the fact that the street design should support urban redevelopment and pedestrian traffic as called for by the Town Center designation (despite my attempts to bring that up during the design process). Even the County’s own standards are often ignored when they don’t serve automobiles (the sidewalk setback to protect people walking is a standard that the engineers apparently fail to follow if it saves them money on ROW acquisition — look at 185th north of Westview HS or just about any other expansion).

The problem definitely isn’t Shelley though; if anything the problem is that there is only one of her!

Thanks, Peter. I’ve changed “are” to “seem” to clarify that this is Oylear’s perspective (though it’s one I sympathized with after looking recently at some of NACTO’s unfamiliarly dense renderings of commercial areas).

Thanks for the clarification.

IMHO, ‘dense commercial areas’ are exactly what the 2040 centers should be.

Nice job. Oylear’s remarks about low level of citizen interest in what their government is doing, is probably accurate. Local government holds public meetings on projects they’re working on, but it seems not many people show up.

To say the least, it’s difficult to apply much pressure in favor of superior, relatively unconventional active transportation infrastructure, when citizens aren’t shouting to the rooftops that this is something they actually desire and prefer, over another 35-45mph 5-6 lane thoroughfare gutting the countryside. Washington County still is kind of a clean slate in terms of road infrastructure. There is potential to do some great things in the county to support road use with a bike, on foot, etc.

So, I am curious what her route and timetable is for commuting from St Johns to H’boro. How long does it take her each day? (I want to try it but it seems like getting Max involved stretches it to close to 2 hrs?)