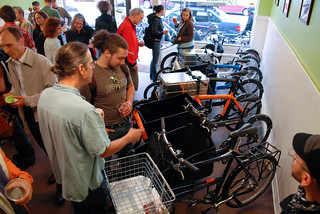 Cargo bike-focused shop Splendid Cycles has just announced they will move locations later this month in order to double in size and keep up with growing demand.

Splendid opened in May 2010 after co-owners Joel and Barb Grover (both former employees of Bike Gallery) were bitten by the cargo bike bug. The small (1,100 square foot) shop at SE 14th and Belmont differentiated itself by focusing solely on the bikes that can carry stuff. Since then, Splendid has become the destination for the popular “Bullitt” cargo bike (imported from Danish company Larry vs Harry). Much of their business comes from assembling and shipping complete bikes throughout the country.

Barb tells us they are now the largest Bullitt dealer in the United States (they handle both wholesale and retail sales of the brand) and one of the largest Xtracycle dealers as well. “California, Florida, Connecticut, and even Alaska are a few of the cities where we have customers,“ says Barb. 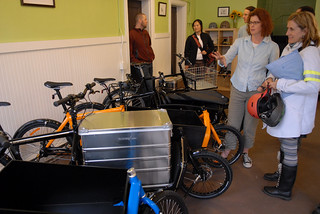 Joel says they’ve seen a huge interest for the Bullitts from other dealers in recent months. “If we don’t move, it will be hard to meet the demand we’re seeing.”

Their new location will be 3,000 square feet and located at 407 SE Ivon (map), just a stone’s throw from the northern entrance to the Springwater Corridor Trail. They plan to be fully moved out of their existing location by January 7th (at the latest) and fully re-opened for business at the new spot by February 1st. They’ve announced a store closure from January 12th through the 29th to focus on the build out of the new shop.

Stay tuned to SplendidCycles.com for updates about the exactly moving date, closures, and so on.

Fantastic location and easy to get to from my house. So, are all your friends and customers doing a bike shop move? Let’s do it!

They’ve got customers in the city of Florida? Wow! That’s a big city!
–
In all seriousness, I’ll miss having this store on my route home. I recently outfitted my touring rig with beautiful and ergonomic mustache bars, and the Clever mechanic crew was among the nicest I’ve ever met. Kudos. I’ll also miss looking longingly at their bikes in the window displays as I ride by. Best of luck by the path!

Charley, this is Splendid Cycles (a clever shop), not Clever Cycles (a splendid shop).

I enjoy seeing your hard work pedal past my shop around 8x day (current number of Bullits I see a day on avg.)

Moving in January – what a great idea!

Congratulations Joel and Barb! I too love seeing Bullitts all over town. And I’m still amazed at how much gear I could carry with a Bullitt and trailer for Park(ing) day in 2011! Full size gas BBQ, PA Stereo system, Cornhole game boards and more! You guys are great. Keep up the splendid work!

Glad to see cargo bikes and Splendid doing so well.

Joel and Barb are awesome! Congratulations on your move, and I look forward to working with you on the new Bullitt that I will be purchasing from you! Let me know if you all will be moving the shop by bike, and I can pitch in a trailer or two towards the effort.

I love that I live in a town where people can get mixed up as to which CARGO bike shop is being discussed.

Congrats Joel and Barb! Thanks for being such awesome partners. – Team Xtracycle