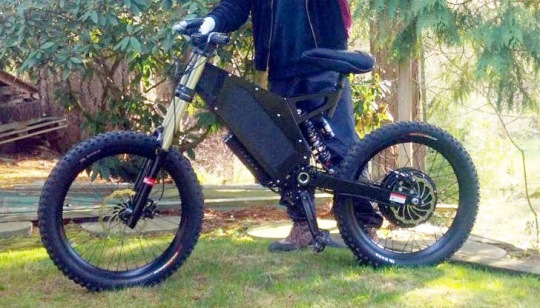 The Portland Police are asking for the public’s help to find this stolen bike.
(Photo: PPB)

Portland Police are on the lookout for a stolen e-bike they say is valued at nearly $10,000.

According to a statement issued by the PPB a few minutes ago, the “Stealth Bomber” pictured above is one of only three bicycles like it in the entire state of Oregon. Here’s more from the PPB:

The victim reported the bicycle stolen to Portland Police on November 29, 2013. The bike was cable-locked to an electrical box in the 100 block of Southeast 160th Avenue and was stolen sometime between 12:00 p.m. and 12:45 p.m. The back tire was also locked using a Kryptonite lock.

The Stealth Bomber electric bicycle is very unique and according to the owner, there are only three bicycles like this in the State of Oregon. The bicycle is described as black and the unique identifying number “387” affixed to a plate on the frame of the bicycle. Although the bicycle is electric, it has a pedal-assist.

If you have information about this theft, please contact crimetips@portlandoregon.gov or call the PPB’s non-emergency line at (503) 823-3333 if you see it around town.

UPDATE, 12/3 at 3:45 pm: Police say they have recovered this bike: “The stolen Stealth Bomber electric bicycle has been returned to the owner after someone saw a reward flyer in the neighborhood where the bicycle was stolen from in Southeast Portland.”

Maybe the answer to this is somewhere here on BP, and I mean this seriously, why the fpp on this bike of all the bikes that get stolen here in town?

also on KGW and KPTV… maybe a well-connected owner?

I just facepalmed so hard I now have a concussion.

My thoughts exactly. What kind of dimwit locks a ten grand bike up, in a sketchy neighborhood, with a lock you can chew thru with your teeth??

That was my knee-jerk reaction as well, but upon looking at this particular frame, I’m not sure if it possible to U-lock this frame. Chains and cables look like they might be the only common alternative and neither hold up against a bolt cutter.

I’d say I’d hope it was insured at that price for theft, but then the underwriter would want the guy to at least put forth some effort to keep it getting stolen – that is, something better than a cable lock to affix it to an anchored object.

found over 30 minutes before this story was posted… *sigh*

Bicycle theft is never the fault of the victim and always the fault of the thief. Basic measures to prevent casual rideoffs are the limits of the responsibility of bicycle owners. Treating every bicycle like Fort Knox is inappropriate, in my opinion.

yeah, but a cable lock–as we have ample opportunity to revisit here–doesn’t meet that test of yours.
Someone I’m sure has statistics – What is the frequency with which bikes that are stolen are:
– expensive/shiny/new vs. not/old/grubby

I bet we can all fill in those blanks pretty easily.

The ‘bike’ has been recovered.

However, with their smallest motor, the stealth is 2x more powerful (1.5kw) the federal legal level (most powerful is 4.5kw, 6x federal limit) and a top speed of over 20mph, the Stealth is not legally classified as an electric bicycle. By Consumer Safety Product Commission definition, it is legally a hazardous substance.

Looks more like an electric dirt bike than a bicycle, but I ***** love it. I’m actually a little surprised it costs $10k. It looks even more expensive than that. Hell a Santa Cruz V10 kitted out with fat tires and all the sparkly bits pushes $10k and it doesn’t even have an electric motor.

What is it legally and should PPD be allowed to use it on public streets in contravenes of the law?

was carless
Reply to  q`Tzal

Thats a DMV issue, not a police one. Motorcycles are still street legal, even though they are faster than scooters!

jocko
Reply to  was carless

Just for gods sake keep it off of hiking and mountain bike trails.

Another sad story about cable locks…though it makes perfect sense why a cable lock was used to lock this bike (only for short periods)…though I wish bike designers would think their design through to how it would be securely stored in public when not in use especially for unorthodox frame configurations AND the new issues eBikes brings up (securing the battery and any cabling needed for recharging in public) per theft. Not every bike owner has a garage or a Bikestation at each end of their trip (yet).

Not every bike owner has a bike that is as expensive as your dad’s car.

My 25 yr old bike isn’t one anyone would be much interested in, but I still use a Kryptonite and try to avoid leavoing it unattended for very long.

Paul in the 'couve
Reply to  Todd Boulanger

Reading up on this bike I can’t see much evidence that suggests to me the designers were thinking about such practical considerations or marketing the bike for such mundane tasks as shopping and commuting. So I can’t say I fault the designers. This seems to be designed for recreation and thrills, not practicality. While anyone is free to use it as they see fit, there are many ways it doesn’t strike me as a great option for commuter e-bike. Maybe if you have a secure parking area at work. The site brags about the battery holding mechanism allowing battery change in 50 seconds! Good luck securing that.

With a bike that is >100 lbs. and > $5k you almost expect moped or motorcycle like security features like locking steering, locked disc brake, GPS beacon, anti theft wheel nuts, etc. so one could lock its rear wheel moped style to a fixed object…or a parking bracket (if such were installed in this City like in other motor scooter centric cities).

But I could not find any discussion of anti theft features or locking suggestions on the product web site or a topic search of their blog.( I guess this is the first one stolen?)

Valued at and actual value are two entirely different things…

My petty first reaction was they should report it stolen to their own department to experience the apathy.

My main concern here is not about the theft and recovery but the fact that PPD is in possession of an ebike that is patently illegal and blisteringly unsafe as a bicycle. At best this is an electric moped with human power backup; hopefully PPD is setting a good example for us by registering it under all required laws and not operating it in public ROWs without strict permission.

Oops, misread, thought this was owned and operated by PPD. Read 1st, doh!

the stealth bomber is capable of going super fast, however it has a limiter installed that keeps it within the legal limit for electric bikes. the limiter is supposed to keep the bike below 25 mph.

The lock on the rear wheel was a New York Kryptonite U-lock. But i have a hunch it was freelocked.

I was sad to see this motorbike was stolen–that meant it still existed. I’d prefer a story about how it was accidentally picked up and crushed by a garbage truck. Motorbikes like that are going to bring the debate which has already been lost on multi-use paths to back-country trails. Even its name shamelessly touts its intent, which is to sneak motorized use into places it clearly doesn’t belong.

I doubt the name is much more than marketing spin on the fact that it’s all black. And though I personally find electric motorcycles / scooters / “bikes” a little silly, it’s better than another SUV on the road…

Dual crown fork, probably well over six inches of rear wheel travel, 200mm brake rotors, DH cranks and pedals, at least 2.5 inch knobby rubber–that thing is intended for off-road use. The whoopie cushion on the saddle suggests the owner might be treating it as more of a moped, but it’s intended as a downhill rig that can shuttle itself.

All that motor + battery’s gotta weigh a lot. That thing can’t weigh less than 50 pounds. Not exactly spry once you get to the trail. I doubt you’d have much fun with the motor off.

Do those wheels look small to anyone else? Like, 24″?

Ugh. Either it’s unique or it’s not–can’t be “very” unique.

So does this mean if I use a cable lock to secure my $10K Fred Sled outside Heart Roasters after the Rapha Gentleman’s Ride I can finally get PPD to do something useful?

Some people are just dumb. Case in point: A few years back, I was walking into the liquor store at SW Lincoln and 1st. Just then a guy in full roadie gear pulls up on a full titanium road bike, decked out with all the nicest bits and pieces……..and promptly leans it up against the storefront, and walks inside! I followed him in, and asked him “do you think that is a good idea?” He said, “well, I’ll only be in here for a minute.”….. Major DUH. It didn’t get stolen, but why make it easy for the thief? People like that deserve to have their nice stuff stolen. Stupid is as stupid does!

It is simply a matter of time before these start showing up on trails. I am not sure how I would react but lets say I would be most displeased to see one of these at Sandy Ridge.