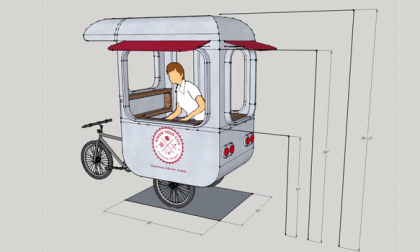 A rendering of the planned mobile kiosk.
(Image: Know Your City)

The latest is a tricycle with a built-in kiosk that’d provide a public face for Know Your City, Portland’s independent civic education nonprofit. The trike would be constructed by local frame-maker Oscar Camanera of Simple Bicycle Co and Brennan Conaway of Micro-Structures, with components from Chris King Precision Components.

“Artist-designed and artist-made in Portland OR, the kiosk is an embodiment of all things local,” the organization writes in its Kickstarter pitch. “From here, we’ll sell tickets to tours as well as books on Portland’s history and culture. The kiosk will also provide information about the city, particularly independent businesses in the Old Town area.” 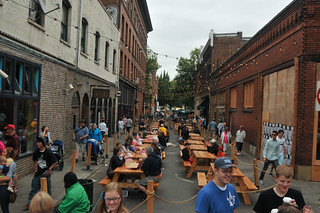 You might know Know Your City by its former name, the New Dill Pickle Club. Originally named after a cultural organization run by and for “hobohemeians” in pre-Depression Chicago, they’ve done everything from publish Sarah Mirk and Don Barkhouse’s comic-book history of Portland’s anti-freeway movement to organize a bike tour of local African-American public art.

Meanwhile, it’s been exciting to watch this little one-block district change from a storage space for seven parked cars into one of Portland’s best-known destinations, just by returning to its historic roots as a street for people.

If you’re interested in chipping in to make this project part of this great spot, check out the video below. There’s also an event tonight in Ankeny Alley aimed at raising awareness for the project.