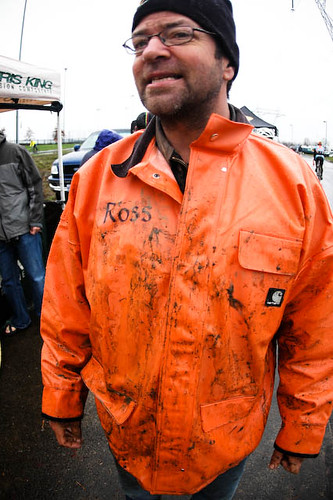 It’s a dirty job, but Brad Ross likes to do it.
(Photo © J. Maus/BikePortland)

Welcome to the second of six audio interviews with local cyclocross personalities and promoters that we’ll be sharing in the coming weeks. We’ve partnered with the Oregon Bicycle Racing Association to broadcast these interviews in advance of their 2013 Cyclocross Championship event coming to Troutdale on November 9th.

The following was written by Elaine Volpe.

Brad Ross, the race producer and director of the Cross Crusade, recently sat down with Neil Green to talk about cyclocross and the Oregon cycling community.

They talked about his early days as the first person to ever own a mountain bike in Alaska, the mentality of producing multiple events in a row, and the mission of the Cross Crusade, which happens to be celebrating its 20th anniversary this year.

“Cross is competitive, but its friendly. You’re competing against your best friends… It’s the best sport. It’s the most approachable cycling discipline. …it’s only 45 minutes long. It’s as painful as you want to make it.”

Not only is Brad passionate about the sport and the local community but he takes his day job as the Director of Cross Crusade seriously. The business, owned by Vivo Productions, has a staff of 9 that put on the race as well as 12 people from OBRA officiating each race. He explains in his interview that he has been attending every world championships in Europe since 2001 as it is a way for him and his crew to know what the sport looks like at the very top level, from the design of the courses to how the venue should look. It’s no wonder they are celebrating 20 years, as they take pride in constantly trying to improve their game and provide a better product to racers in the area.

“Our goal for our club is to ensure that you have the best possible day of your whole life.”

But don’t let us tell you too much of what he said, have a listen for yourself…

I was hoping to hear more stories from the early days.