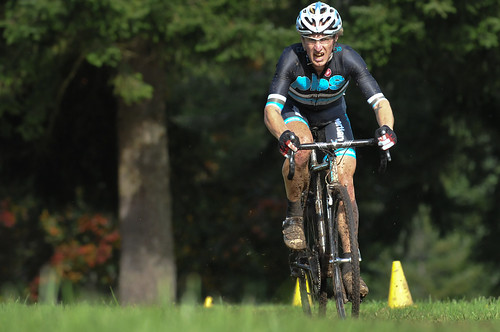 Molly Cameron, shown here racing in 2010, is a fixture on the local cyclocross scene. In addition to being an elite-level racer, she also owns Portland Bicycle Studio.
(Photos © J. Maus/BikePortland) 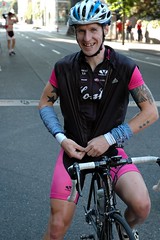 Welcome to the first of six audio interviews with local cyclocross personalities and promoters that we’ll be sharing in the coming weeks. We’ve partnered with the Oregon Bicycle Racing Association to broadcast these interviews in advance of their 2013 Cyclocross Championship event coming to Troutdale on November 9th.

The first of the series features an interview with Molly Cameron, a veteran professional racer and owner of Portland Bicycle Studio, a retail and service shop in northwest Portland.

The interview covers everything from her early racing days, her first-ever cross race (which she won using a road bike), how she got hooked on cyclocross, and her international racing experiences. Molly also talks with host Neil Green about her bicycle fitting studio and coaching and her desire to wear the prestigious 2013 OBRA Championship winner’s jersey.

Have a listen for yourself (if the embed below doesn’t work, here’s the direct link):

— Special thanks to OBRA, Tenacious Training and Events, PAGATIM, Neil Green, and the Grand Prix Erik Tonkin Cyclocross series for making these interviews possible. Also note that all 2013 cyclocross coverage on BikePortland is made possible by Sellwood Cycle Repair.

While a series of interviews with Portland CX racers sounds really cool you’ve made a classic error here. Molly Cameron is a guy, and knowing this is the indicator of whether you are truly knowledgeable about the local racing scene.

You have made a classic error here. Molly prefers to go by ‘she.’ If you were truly knowledgeable about the local racing scene you would know that. Would you like some resources to diversity sensitivity training?

Slow joe… Molly Cameron goes by a ‘she’, and is not ‘a guy’, as you may think you know. Tread lightly.

Slow joe, sounds like fivefrud has it in for you “Walter White” style. Tread lightly indeed.

Oh yeah SHE is faster than all of us and most “guys”.

i just meant “don’t stick your foot in your mouth any farther before you find out what you’re talking about/dont’ get insulting the author wasn’t wrong/probalby don’t want to start throwing around stereotypes” etc., etc.

If she were competing in women’s category I might see where you would want to bring this up.

How Molly identifies has nothing to do with how she races.

You have a fair point about her competing in the men’s vs women’s category. I think the question goes beyond Molly. I do know theat about her.

Suggesting someone ‘do their homework’ is a more than a bit snarky as a response. In my mind, it still seems a legitimate question.

That’s I get for showing off. I stand corrected and embarrassed.