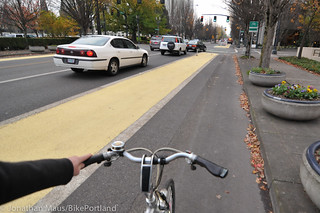 Turns out people like having few cars around
and more protection when they ride.
(Photo © J. Maus/BikePortland)

The Portland Bureau of Transportation is touting the success of their road diet and protected bike lane project on NE Multnomah Street in the Lloyd District. On their website today, PBOT announced results of a travel survey and bike count by the Lloyd District Transportation Management Association that shows significant increases in bike use compared to last year. The reason? A major design update on Multnomah that transformed the street from a 1970s-style, auto-dominated thoroughfare to a more modern cross-section that includes dedicated space for cycling.

Bike traffic has increased on NE Multnomah in 2013 following the construction of the demonstration project last fall. 265 bicyclists were counted traveling through the NE 7th & Multnomah Street intersection during the 2-hour count window this year, up 15% from the 2012 counts (231) and 32% from the 2011 counts (201). NE 7th Avenue and NE Multnomah have both been improved in the last few years with wider bike lanes and sections that are separated and/or bufferred from auto traffic.

PBOT is using this survey data as clear evidence that people who bike through the Lloyd District have begun using Multnomah specifically because of the protected bikeway and that “bicycle facilities in the Lloyd District are attracting new people to use bikes.”

In addition to the TMA’s data, as we reported on last week, the Oregeon Transportation Research and Education Consortium (OTREC) is also evaluating how the new configuration of NE Multnomah is impacting travel patterns. Following more surveys, video analysis and traffic counts, a determination will be made later this fall, “to decide the demonstration project’s future.”

How Multnomah works — and perhaps more importantly, how PBOT and the media spins whatever findings are revealed — could have a big impact on other projects throughout the city.

Speaking from personal experience, I have changed my route through the Lloyd in order to use Multnomah now that it has protected bike lanes. These new findings confirm that I’m not the only one.

I live in Hollywood and have definitely been using NE Multnomah more to get home from downtown since the changes. I generally avoid it when I think there might be heavy mall traffic (and use Tillamook instead), but when mall traffic is light, the separated facilities are definitely enjoyable to ride though!

Chris I
Reply to  ScottG

It’s great not having to meander north on Tillamook to reach Vancouver and the Broadway Bridge, or two squeeze into the tiny bike lane on Broadway/Weidler. Personally, I use 16th to connect from Tillamook to Multnomah. The only tricky spot is where 16th and 15th merge. It would be cool to see the right lane of 15th turned into a 2-way cycle track from Multnomah to 16th.

NE Multnomah is my jam when I need to cross 84 from North Portland. I often haul a bike trailer and the buffer gives me piece of mind. We could do a better job of stopping for pedestrians there, goodwill and better facilities don’t grow on trees.

Not to put a wet blanket on this, but the results are based on a single 2 hour window done on one day, this year vs. that year? A sunny day in 2012 and a rainy day in 2011 would account for the change in counts, irrespective of the quality of travel. I really want quantitative data that show better infrastructure leads to more bike travel, but let’s not cherry pick our data.

I definitely enjoy the ride on NE Multnomah for my daily commute, but I wonder if ridership wouldn’t have increased more than 15% if the signals were timed for bicyclists. Whether travelling east or west, I often find myself waiting at a red light on Multnomah and the signals are timed such that the next light turns red right as I get there.

This is why I’ve stopped riding it. Broadway is more dangerous, but much much more faster.

This is a classic example of why other cities are quickly catching up to and will soon surpass Portland in terms of biking. NE Multnomah is one of maybe 3 cycle tracks in Portland. Despite clear indications of its success, PBOT is still evaluating whether it will even keep the damn thing. Meanwhile, NYC continues to add miles of cycle tracks, Chicago is building 25 miles of cycle tracks each year, and DC is developing plans to blanket the city in cycle tracks. Of yeah, and all three have bike share programs up and running. Cycle tracks are no longer new in the US and nearly everywhere they’ve been thoughtfully implemented, they’ve been incredibly successful. While studying cycle tracks is great and necessary, to make a city bike-friendly, you need to actually build them as well.

231 to 265 people during a bike count isn’t that impressive. Let’s see what happens when we put awesome protected bike lanes on Sandy or Foster.

I feel as if bike commuting is up in general this fall. There are a lot more people bike commuting days. It’s awesome. Portland is a great place to get around on a bike. Nice work city planners.

I would use this more if there were more connections to other bike-able streets.

For example, NE 7th Ave – between Weidler and Broadway, it suddenly becomes one narrow lane which cannot accommodate a car and a bike at the same time. It comes so close to connecting to Tillamook and Hancock, but doesn’t.

North-south connectivity east of Williams is a real problem. In addition to NE 7th, other bicycle-hostile streets include 15th, 24th, and 33rd. 21st north of Multnomah isn’t great either.

Even though I use it solely as a thru-fare and not a destination, I really like NE Multnomah. If there was actual bike oriented development (not chain stores in the bottom floors of condos) I’m sure I’d start making it a place to stop and spend money.

I used to live in Portland, but I now live in Albuquerque. But…when I was back for a visit this summer, I loved taking NE Multnomah. I just wish Albuquerque would have the good sense to do some projects like this. Albuquerque has no protected bike lanes whatsoever, and many of the bike lanes that DO exist randomly end, dumping you onto six-lane arterial roads with a 40-45 mph speed limits. While Albuquerque has a respectable system of dedicated bike paths, those are useless if you are going anywhere beyond the trails. This makes me miss Portland that much more.