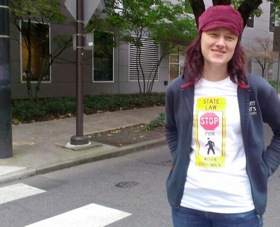 Ever been frustrated when other road users don’t respect Oregon’s crosswalk laws? Now you can wear a helpful reminder on your chest thanks to a new t-shirt that will turn you into a walking traffic sign.

Our friends and neighbors at Lancaster Engineering (who are nice enough to rent part of their office to us) have stepped up to promote safe walking by offering t-shirts that have an official Oregon regulatory sign plastered across the front. The t-shirts are being offered by Lancaster to help raise money for Portland-based non-profit Oregon Walks (it also happens to be Walktober in case you didn’t know).

And for all you wonks out there, you’ll be happy to know that the design on the shirt is MUTCD compliant…

As well as being a fundraiser, the shirts were inspired out of frustration with the many people who fail to stop when someone is trying to cross this street. Despite valiant efforts by PBOT and various advocates through the years, there’s still a need to raise awareness of Oregon’s crosswalk laws — so why not just put it on a t-shirt?!

The cost is a suggested donation to Oregon Walks of $20-25. If you want one, get in touch with the folks at Lancaster via email (info [at] lancasterengineering.com) or contact employee Brian Davis on Twitter @briandavispdx.

— Since we’re on the topic, you can learn more about Oregon’s walking laws via this handy animation. If you’re curious/confused about how/if/when Oregon’s crosswalk laws apply to you while riding a bike, check out our recent story on that topic.

Design idea for second draft. Make a “sign post” holding up the sign made up of the words “Every corner is a crosswalk-painted or not” or something of the sort.

How about a bike jersey, too? So I don’t get run over from behind so much by bicycles when I stop fpr peds.

This isn’t going to help, since 99% of drivers don’t even know what a crosswalk is (they think it has to be marked or it isn’t one).

How about putting it on the backs and fronts of PPB uniforms? How about squad cars?

How about a shirt that says “SMILE! Your illegal driving is being posted to YouTube.”

Sarah is rocking that shirt. I can’t wait to get one!

Thank you, Brian, Todd, and all! So. Awesome.

Thank you so much to everyone at Lancaster – these shirts are amazing! Their support of Oregon Walks and increasing awareness about the crosswalk law is just wonderful.

You can also purchase the shirts at the Weston Awards, Oregon Walk’s annual award ceremony and fundraiser to celebrate walking in the region, on October 26th!

It’s really the flurry of little things like this that make for big change.

To the rest of you — do you run a small business, or have a say in the management of a larger one? Come up with a clever little marketing/educational message, and you too can help change our future, promote your company, get donations to your favorite charity, and get featured on BikePortland.

When I’m (rarely) driving, I find myself having to choose between legal and safe. It’s often *safer* to not stop for a pedestrian.

But the following scenario has played out before. In either a two or four lane situation, one legal driver is met by 3 illegal ones. A pedestrian decides to proceed because the first driver stops, and others don’t. This places the pedestrian in serious peril, especially if the stopped vehicle obstructs view.

The same scenario plays out where drivers absolutely should not stop when they have right-of-way but one does stop in an effort to be helpful to a cyclist. I’ve had situations where if I had heeded the “go ahead” wave of a friendly driver, I’d be certainly dead. Not exaggerating.

One could argue that we should always just stop right? I mean, it’s the law right? But when I do the “right thing” on paper and some little kid or adult is killed because of it, I’ll not be at peace again.

We are moving in the right direction with more outreach. This T shirt is excellent in supporting that.

Opus the Poet
Reply to  Zaphod

If you stop and someone else doesn’t and hits the pedestrian in the crosswalk it’s not on you, it’s on the idiot that saw a vehicle stopped at a crosswalk and did not stop.

Chris I
Reply to  Zaphod

I stop and throw on my hazard flashers. It’s about 90% effective on the busy 4-lane roads. And I NEVER wave on the pedestrians. They need to decide when it is safe to go.

Thanks for the write up, Jonathan!

We’d love to see you all at the Westons this upcoming October 26!
http://wpcwalks.givezooks.com/events/the-2013-weston-awards

Thanks for the great comments and kind words. This idea started with Brian Davis and it developed into a fun and timely effort to benefit Oregon Walks during Walktober. We’re having a good time with it! Get your shirts while the getting is good, we still have all sizes available.

Middle of the road guy

How about bumper stickers reminding cyclists that they have to stop, also?

Dan
Reply to  Middle of the road guy

I was walking in the crosswalk on Multnomah, between 7th & 8th, and a car was stopped for me. As I approached the curb, a delivery cyclist for Jimmy John’s swerved around me out of the bike lane directly in front of the car’s bumper just as the car was preparing to move again. I think their riding style in the Lloyd district is embarrassing, and I won’t order delivery food from them for that reason.

Middle of the road guy

I’m wondering what the wisdom behind trying to get a driver to read someone’s t-shirt is while they are driving. seems like even more of a distraction.

when I cross in the “marked and with yellow strobes” crossing on se 122 at the library , the mechanical voice warns “warning ..all cars may not stop” …..IMHO , this is the perfect place to add more of those red light cameras.
Sometimes it scares the begeeses out of me when the near lane stops and blocks the view of the second lane where some idiot just flies on thru , just missing me .

Chris I
Reply to  TOM

We should have red light cameras at every intersection.

Having been verbally threatened/menaced (name-calling and getting out of the motor vehicle) for pointing at a crosswalk as a demonstration to a speeding car, I would be aware of the fact that people don’t like confrontation on their unsafe/illegal behavior. Wearing this shirt, it may do to be ready for some offending folk to not be happy.

That said, I often find myself confronting people that make things unsafe despite occasional setbacks with raging road users.

I don’t think the shirt is meant to be read by motorists at 30 mph, or when they’re stopped at a crosswalk.

I think it’s more for when you as a pedestrian are interacting with ped-unfriendly motorists at the bank, the grocery store, your kids’ soccer practice, etc, it functions as a public service announcement.

Though I guess motorists can see that “stop” sign pretty clearly if you rotate your torso towards them as you cross the street. And the “state law” text, on a good day, with decent light, a motorist with a clean windshield, and something approaching 20-20 eyesight.

Looking forward to seeing these around town,

You’re probably right about the real audience of the shirt. I think this is a great way to start inroads for a cultural shift. Having a this message out in public is a great thing. The more people think of going through an occupied crosswalk as a despicable act, the the better.

There was an mention about marginalizing poor road use behaviors using a model based on the anti-smoking movement on this blog some time recently. I say marginalize away!

the signature on my sisters email states to the effect ‘every intersection, marked or not, is a legal crosswalk in the State of Oregon’.
My guess is that does more to inform a wider sampling of people than a tee shirt. Not dismissing the tee, but getting the word out to everybody possible is the idea…
I think I will plagiarize from my sister.. you probably could too.

Where can I get a T shirt with the logo of the bike rider flying over the handlebars that they put on the signs at the max tracks?

as a transplant from nyc, think the govt could do a better job advertising laws like this…u have to like the proactive move to get the message out..but still think its confusing to say that essentially EVERYTHING is a crosswalk…and then have some labeled, and the rest not…why mark any specifically as crosswalks then? are they “crosswalkier?” it makes for frankly unsafe conditions all around.

I had to do this manually to a guy on SE Division a few weeks back. I stride out into the (marked) crosswalk, he brakes to avoid hitting me (so thanks for that I guess), then lays on his horn. I’m not big on letting folks like this have their way, and he was in a convertible with the top down, so I stopped, turned to face him, and had an, erm, nice calm discussion with him. I even got backed up by some cafe patrons across the street. I felt bad for his wife/girlfriend, who was the picture of embarrassment.

That said, I have a major, major issue with the law as it stands. And that issue is: intent to cross. When you’re driving, it’s impossible to evaluate intent to cross. Prior to the installation of flashers on the NE 60th 84 overpass, I stopped countless times for people who were just craning out to look for a bus. And I’ve blown right past people who didn’t at first appear to have “i’m gonna cross now” body language. How do we fix this? Cause I don’t have a clue.