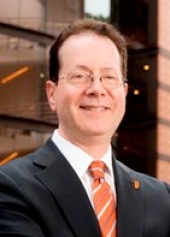 One month after a Lewis and Clark College student was seriously injured in a collision on SW Barbur Blvd, the president of that institution is calling on the City of Portland, Metro, and the Oregon Department of Transportation to take immediate actions that will lead to better conditions for biking and walking.

The letter is dated September 19th and it was made public today by Friends of Barbur, a volunteer group working to improve conditions the notoriously dangerous street.

In the letter, Glassner says he and his staff are actively encourage members of their student body and faculty to ride bikes or walk to campus. However, he writes, “We need to feel confident that they are not putting themselves in harm’s way by making this transportation choice.”

“We have a special interest in the members of our community having confidence they can safely use Barbur to get to and from Lewis and Clark without a car,” reads the letter.

Glassner refers to Metro’s ongoing SW Corridor transportation planning process, but he also notes how that’s a long-range plan that might not bear real fruit for decades. Therefore, writes Glassner, “It’s important to consider the present safety and needs” of people who use Barbur.

Barbur has seen a steady stream of injuries and fatalities over the years. While it was a very serious collision to one of his own students that might have spurred Glassner’s activism on this issue, just yesterday another person trying to use Barbur without a car was sacrificed to the gods of the status quo.

Many people feel the best “creative solution” out there for Barbur is a road diet to slow people down and create more pleasant cycling conditions. At this point however, ODOT hasn’t budged from their dismissive and dishonest position to maintain the lane configuration that puts a top priority on auto speeds and capacity. Will this letter from the leader of a prominent and respected local institution move the needle and bring ODOT to the table? Stay tuned.

time to stop worshipping the gods of the status quo and instead turn to the gods of progress!

But … But … Status Quo is my kinda god! He asks for none of my time or money and doesn’t make me go to church. All I have to do is be lazy and apathetic; where do I sign up?

Agreed!
Can someone skilled with math or ODOT themselves calculate how many seconds off car commute time is worth one human life or one major trauma?
Maybe this has already been done and just needs to be explicitly stated.

This is fantastic news. Many thanks to President Glassner for standing up for the safety of students and staff at Lewis and Clark.

Thank you president Glassner. And way to pull no punches Jonathan.

Thank you President Glassner. ODOT, et al, will only react when they see that it is more than “those bicycle people” who are demanding change.

Oh…but a re-striping of Barbur Blvd will be PERMANENT and might possibly affect the SW Corridor planning process that may be implemented in a decade or two. Paint is just too difficult to remove if this road diet fails to make the road safer. The risk is obviously too high to experiment with crazy solutions like this that have never been proven to work anywhere else on major roads. Come on folks, there are more important things to focus on than people getting killed on public roads, like people rolling stop signs while biking. Priorities!

Well said! Thanks for the leadership, Mr. Glassner.

ODOT maintains that bicycle traffic merging into auto traffic lanes at a posted 45mph is safe.

How can we even begin a discussion with that kind of mindset?

Don’t take this too lightly. I have a strong suspicion that the improvements on SE DIvision between 60th and 8oth were largely based on the now ever expanding SE PCC campus and a recent expansion at Warner Pacific. Granted Division is not under ODOTs jurisdiction, which made the wheels spin faster.

Perhaps if a few more major commercial interests along the corridor were to make such letters and public statements there would be more action on ODOT’s part. I bet a few real estate management companies and a few other stake holders in the area (like Kroger/Fred Meyers – with two stores on or within spitting distance of Barber) would peek some interest at ODOT.

After all, most government departments pretty much do the bidding of the big businesses.

On L&C President Barry Glassner’s part, not a bad letter, urging that changes be made to Barbur Blvd, that would enable it to be a safer road for people on foot or bikes to use.

He makes some good points, including mention of the school encouraging students and staff to travel to and from the school by means other than personal car. Points up the fact that Barbur offers a more gradual, thus preferable for biking, route up to the campus from downtown.

What he might have mentioned, but didn’t, is some estimate of what percent of L&C staff and students actually bike from Downtown or close in Portland neighborhoods, to the campus. This is important, because even given Barbur’s comparatively gradual climb to the L&C Palatine Hill campus, it’s still quite a climb. Distance too; probably about a 6 mile ride.

I doubt Pres Glassner really imagines any student or staff member actually walks from Portland to the campus, even though a statement in his letter touts Barbur for such a use. That would be quite a hike before starting school for the day.

Not to suggest changes to Barbur, at least for the short term, shouldn’t be made to have the road be better for travel by bike, and safer to walk along and cross on foot.

It’s great that Glassner shows some awareness of what’s happening on Barbur, and the effects of it on people relatively close to him. Being president of a college of some repute, his voice potentially can carry some weight the words of people in more modest positions may not.

My former boss was a L&C Law School student. He biked there every single day. Also – arguing that Barbur doesn’t need improvements because no-one bikes on it is a little bit “chicken and egg” so to speak – well yes! But people would bike on it if it had a cycletrack!

Although not many LC students live downtown many professors do. The Barbur route is important for students that live on the hill though. Students go downtown very often for socializing and errands. If they miss the last shuttle from downtown it is not unheard of to take a late-night hike up Barbur. Students will also often live near Corbett, Lair Hill, or in Hillsdale, and consequently use Barbur often to get to campus and downtown.

“…If they miss the last shuttle from downtown it is not unheard of to take a late-night hike up Barbur. …” Ian C.

It’s still a long hike from Barbur, south, about half way yet to go, up and down hills to the L&C campus, but for the people that occasionally do it, more power to them!

From my perspective, more realistically beneficial traffic and mph speed reductions to Barbur, could be to neighborhoods along Barbur yet closer to Downtown; Burlingame and more, approaching Downtown. To the neighbors along Barbur, I imagine they may find to be a godsend, the reduction in motor-tire noise from 10-15 mph reduction in the speed limit.

Re-purposing, as an experiment if nothing longer term, one of the road’s main travel lanes to create a big, broad bike lane the length of Barbur from Burlingame to Downtown could be a realistic distance ride for quite a wide range of people. It’s still a fairly serious climb from Downtown to Burlingame, but not overly muscular. It would be worth it to try this, to find out how many new types of people, bike-wise…such a change to the road could help bring to riding somewhat regularly.

This video explains some of the history behind Amsterdam’s adoption of the bicycle. Amsterdam has a similar population to Portland.

I feel as though this letter from the college president should accompany some form of protest from the student body, and possibly some examples of civil disobedience from the population who use Barbur Blvd., and sympathizers.

Whining about paint markings on the occasion that someone is injured has zero net effect. Not only is the argument for paint weak, so is the solution. Paint does not reduce the number of cars (or the need for them), nor does it physically repel a drunken driver from murdering other citizens.

Serious bicycle adoption is more than just accommodating a hobby, which is the state of things today. One of the first steps is to organize cyclists into a union or legal body and then have that body act. Having greying pleasure cyclists go to meetings with traffic engineers is nice and all, but totally ineffective.

Who was more effective in ending the Iraq war? IVAW or Bradley Manning?

Jonathan – when are you going to have a sit down with ODOT’s Jason Tell, and ask him what the deal is?

Every year, we see Jason at the Traffic Safety Summit, or some other wonk event, talking earnestly at the podium about how safety is ODOT’s “number one priority”. Yet it seems to actually be ODOT’s 105th priority.