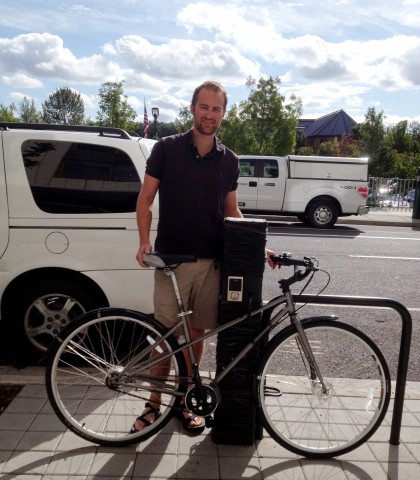 The price of bikesharing adds up fast when 10 bikes and a solar-powered parking dock cost $45,554. It’ll take an estimated $3.4 million for Portland’s forthcoming public system to get enough hardware to cover the central city with 75 docks.

But what if Portland had a private bikesharing system, too?

That’s the thought that was keeping Southwest Portland resident (and noted local biking advocate) Kiel Johnson up at night. So he spent the last six months inventing one.

“Basically, I came up with this idea and couldn’t sleep for a week because I kept on thinking about it,” Johnson said. “So I was like, okay, I have to build this, or I’ll never be able to sleep.”

Last week Johnson, a small business owner with a history/economics degree from Lewis and Clark and no previous experience in product design, finished his prototype: a four-foot-tall steel pillar with a wireless battery-powered Internet connection and custom-fabricated, keypad-activated locks for two shared bikes. It attaches to a standard bike staple. Johnson’s goal is to sell it to apartment buildings for $1000 to $2000 per station, with two bikes included. He’d charge a service fee of maybe $100 per month to maintain the bikes and the station.

Residents could then use the bikes whenever they’d like: for a grocery run, a commute, a ride along the river.

Johnson monitors it all using a homebuilt spreadsheet and an iPhone app designed to work with home security systems. He’s already started testing the station at his own apartment building in the South Waterfront.

“I put up the flyers on Friday and have gotten 5 people to sign up so far,” Johnson said this week.

The Zipcar of bikesharing? 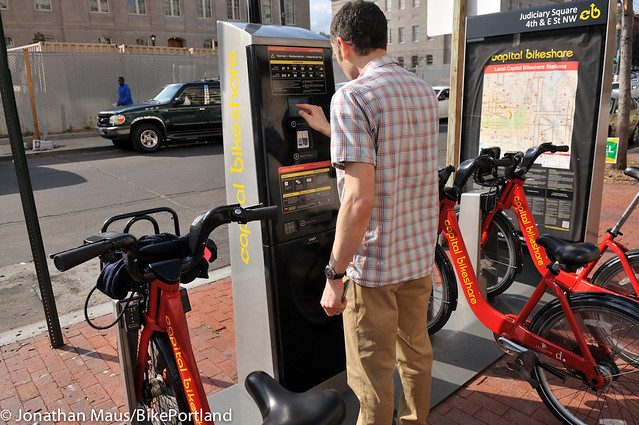 Alta-style bikesharing functions like car2go, the floating-fleet service that lets you pick up and drop off cars anywhere within a given area. Johnson’s bikesharing concept, by contrast, is like Zipcar: each bike would remain associated with a certain location, and attract a certain user base.

As with car2go and Zipcar, Johnson thinks such a system could coexist with other bikesharing such as the public Portland Bike Share or the Intel-based Open Bike Initiative.

“I’m not really trying to compete necessarily against anybody, but just offer some alternatives,” said Johnson, who has a day job running the Go By Bike shop and bike valet at the base of the Aerial Tram. “I know there’s been a lot of discussion about the equity with the bikeshare. And I think this could be one way to provide bikeshare to people that don’t live downtown or in the central area.”

“A cool thing too is that you could have different kinds of bikes,” Johnson added — that’s why he’s planning to add a trike to the prototype at his own apartment building. “There’s a lot of elderly people that want to ride a bike but are uncomfortable with the balance aspect.”

Johnson hopes his prototype will help him figure out whether customers will return it promptly without paying for the service themselves — something he knows would add much more complexity to the system.

“In an ideal world, I’d like to keep it all free for people,” Johnson said. “An apartment building would buy one of these stations and then it would be free for their residents to use.” 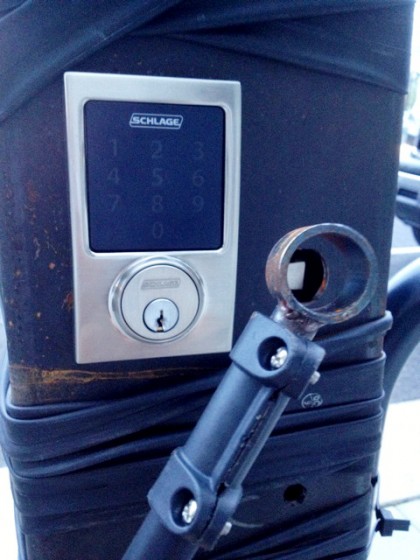 Bringing an independent product like this to market would be difficult. But Johnson may have an ace in this hole: A new city law that gives apartment builders a big incentive to offer bikesharing stations at their buildings.

This spring, the City of Portland began allowing new apartment projects to reduce their on-site auto parking by up to 25 percent if they offer on-site bikesharing instead (PDF). A bikesharing “dock” with eight bikes and 16 locks exempts a development from including three auto parking spaces — but at $45,000 per Alta dock plus enough space to store the dock, the cost savings aren’t huge. (Each auto parking space adds $20,000 to $55,000 to the effective cost of a building, depending on whether it’s above or below ground.)

A comparable set of bikesharing stations from Johnson, however, might cost just $15,000. Johnson added that his stations could easily be painted to match a building’s color or a business’ branding.

“The bikeshare idea — there’s just so much opportunity now, especially with all this new technology that’s being developed,” Johnson said. “I just think it’s a matter of time before somebody figures out a way to make it cheaper. I don’t know if this is the cheapest option. … In this trial, I want to sort of see how it works and what happens.”

The result, he hopes, will be a city where it’s easier for ordinary people to experiment with getting around by bike without owning one of their own.

“I used to not really be into bikes at all, and then I went to Copenhagen and went on the bikeshare there,” Johnson said. “It was being able to ride in such a bike-friendly city on a bike opened my eyes to the potential of what bikes could really do to change the urban environment and make cities a better place.”

Update, 2:40 pm: We just received figures from the City of Portland that better break down the projected hard and soft costs of bikesharing. I’ve changed some of the numbers above to reflect this.

I love the way this guy thinks! Good luck with the lower-tech, lower-cost solution. I agree that the official bikeshare system will create more overall interest in bikes, and therefore more, not less, market for alternatives.

This has applications beyond bikeshare. Imagine big installed locks for bike parking that you use on the fly. It’d let you run errands when you don’t have a lock or don’t want to carry a really big lock.

Y’all also might find this interesting. Many people in NYC felt this was a more appropriate solution for the city–and that was before Alta had their software fail, then had their hardware wiped out by Hurricane Sandy..

I love that I can run into Kiel on Monday while route-checking a Portland By Cycle ride and hear about this enterprise; break the news to Steve Hoyt-McBeth on Tuesday; and read about it in BP.org on Wednesday.
I fully expect franchising to Madison and Chicago by Friday.

I’ve heard that there are bikers and shops against this idea. It apparently contributes to gentrification because it is unplanned development? Anyone wanna comment on what the possible cons of this are, as this argument doesn’t make sense.

In short: haters gonna hate. In your example, NIMBYs do not like any change that happens in their city, because they do not want anything to change. See SF for a good example of this level of entitlement…

I’m on vacation in Denver and my wife and I rode the B-cycle bikes here. We were totally blown away by how simple and easy the system was, charging $8 per 24 hours for unlimited bike access. The bikes were exceptionally good to ride, with baskets, generator lighting, adjustable seats, and internal 3-speed gearing. I think Portland really needs to step it up if we want to continue claiming we’re such a great bicycle city, as many other cities have better amenities than we do.

Would be good for grocery bikes. Get some sturdy mountain bikes and put a set of Wald baskets on the back, and one in front. With bungees for tieing down bulky things.