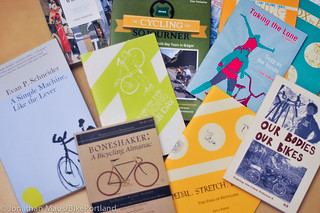 Portland has been exporting its biking expertise for years, but the explosion of independent publishing is helping that happen faster than ever.

Case in point: Four new books by young local authors, all currently in development, poised to document and spread local bike wisdom around the city, the region and the country. One’s about moving by bike, one’s about bike touring, one’s about bike-inspired cooking and one is a popular-audience introduction to the role bikes can play in economic growth.

With the days getting shorter and book season approaching, here’s a cheat sheet on a few projects in the works, and how to get ahold of them.

The Oregon Walks executive director (and potential world record holder for participating in the most bike moves and for leading the biggest) edits 23 contributors who share their relocationary wisdom in about 80 pages.

The Culinary Cyclist: A Cookbook and Companion for the Good Life
Anna Brones, $9.95 from Elly Blue publishing

This cookbook is bike-related mostly in that it uses bikes as an icon of simplicity and self-reliance. Brones, “a Swedish Portlander currently living in Paris,” has created a “guide to hedonistic two-wheeled living. Recipes are all gluten free and mostly vegan and include such decadent basics as Sea Salt Chocolate Cake and baked eggs in avocado halves (it may just be the perfect breakfast) are paired with cheerful instructions for gracefully hosting a dinner party, gifting food, bulk shopping by bicycle, and two-wheeled picnics.”

In a follow-up to her 2012 guidebook on the best Oregon bike touring, Portland-based Ellee Thalheimer teams up with the Bicycle Alliance of Washington to explore the 10 best multi-day trips up north. If it’s modeled on her last, expect a volume that’s thick, sturdy, beautiful, meticulous and sized for your handlebar bag.

Bikenomics: How Bicycling Will Save the Economy (If We Let It)
Elly Blue, coming Dec. 1 from Microcosm Publishing

Blue, a Portland-based freelance writer, speaker and publisher, expands her 2011 zine about bikes as a tool for prosperity into a full-length book.

Blue’s research began as a gloriously link-rich series of columns for Grist Magazine, and she’s spent the years since strengthening her nationwide network of stories, sources and statistics. What I’m saying is: prepare to be persuaded.

In somewhat related news, Joe Biel (who happens to be Blue’s partner) has completed his four-years-in-the-making documentary Aftermass, about the history of bike activism in Portland after Critical Mass lost steam a few years ago. Biel is preparing to show it at film festivals this fall.

Portland’s bikespertise is everywhere, and it ought to be.

Hop in the Saddle got made fun of by Bike Snob NYC, and 100 percent justly so, but I picked it up on impulse, and I have to say, it is a pretty charming read with some very good routes in it. At $10, it is exactly the right price, and I’m sure it will be a nice perpetual seller for Powell’s and New Seasons.

I really, really have to recommend Evan Schneider’s “A Simple Wheel, Like the Lever,” which is pictured, another impulse buy that I picked up from the west side Reading Frenzy (RIP) largely because it had a picture of a bicycle on it (I am nothing if not easily marketed to). It’s a wonderfully melancholic, elegantly written slice-of-life novella that I think will resonate with a lot of commuting cyclists. There’s some sharply observed bits about cycling in it. A lot of readers would probably be irritated by its protagonist, who is something of a sad sack, but I liked it.

are
Reply to  PC

i will second the recommendation of evan’s book

I’ve been pleasantly pleased with the flow of bicycle-related books from Oregon to Illinois this year. Regardless of the exact topic, each volume has its beer-pairing attractions.

Properly mocked by bikesnob in 3…2…1…

“A Simple Machine Like the Lever” is one of my all time favorite books! It’s just hilarious and heartwarming at the same time. And yes, the biking is great. I really didn’t think I’d like it, because it’s not my usual genre (women’s contemporary) but I picked it up at the library because I needed a book for camping. I read it in one day – so great!!!! I have since bought a copy for many birthday gifts for friends and family in Oregon and elsewhere and both my people who bike and those who don’t all love it!