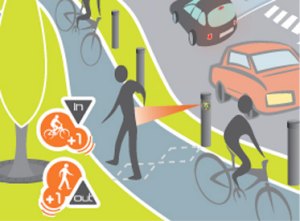 Manufacturer’s graphic of how the counter works.

The Oregon Department of Transportation just received shipment of an automated counter similar to the one in use on the Hawthorne Bridge in Portland. After ODOT Region 1 Transit and Active Transportation Liaison tweeted a picture of the new counter today, we followed up and learned a bit more about where it’s headed.

Horning says the counter will be installed on the new segment of the Historic Columbia River Highway State Trail that is set to open on September 15th. As Horning shared in a guest article here on BikePortland back in May, ODOT has been investing millions to renovate and re-build the Historic Columbia River Highway’s eleven miles that are set aside exclusively for hiking and biking. In September, ODOT plans to celebrate the opening of a 1.6 mile section that connects John B. Yeon State Park in Warrendale to the existing restored section of the state trail at the Moffett Creek Bridge (towards Cascade Locks).

The new counter is the Eco-Multi model by Eco-Counter, the same company that made Portland’s counter. Horning says due to limited cell phone coverge, their new counter in the Gorge won’t have a visual display or daily uploads to a website like the Hawthorne counter. However, ODOT will regularly download the data so staff and the public can have an accurate count of path users. The counter will also tally all path users (not just people riding bicycles) thanks to what the company calls, “the Smart Connect,” technology, “which is able to prioritize choices in order to classify the different user types.”

Funding for the $5,000 counter came from the same pot of money that is normally used for the state’s manual trail counts. ODOT granted a special request to try this automated counter pilot program.

In other Historic Highway State Trail news… On August 2nd, an invite-only ride featuring regional dignitaries and advocates will get a closer look at the new path and other wonders of biking in the Gorge. The ninth annual “Voyage of the Visionaries” — also known as the Policymakers Ride (organized by Cycle Oregon) — will take participants 26 miles from the Women’s Forum to Cascade Locks Marine Park.

I’ve already ridden it. Go after 5 or on the weekend and walk your bike over the construction areas. Almost all of it is done.

I am SO STOKED for the opening of this trail. YOU HAVE NO IDEA!!!

My boyfriend is always nagging me to come ride Bridge of the Gods 100 mile loop, but I refuse to ride on I-84 because it scares the pants off me. This trail will close a vital connectivity gap, and enable the BOG ride with no freeway segment necessary.

Jonathan/Michael – will there be a BikePortland update on construction of this trail? I cannot find a lot of info on it anywhere.

I’ll be riding this trail next Friday as part of the Policymaker’s Ride. We’ll get the latest info and I’ll shoot tons of photos and share a recap when I get back.

Your boyfriend may wish to repect your boundaries. In my experience, riding on I-84 is about 2/3 as sketchy as riding on HWY 14 in Washington. Information is available on a regular and real-time basis on the progress of the construction. It is easy to access and requires no phones , internet, books, or newspapers. (hint: it does require two wheels) I think a bike/ped counter is stupid for several reasons. ODOT had better get out of the saddle if they are really going to connect through Mitchell Point and HR on schedule.

Like K, totally stoked. I’ve been wanting to do more bike camping and touring in the Gorge, but not until this gap is closed. Can’t wait!

At some point, it would be great to get a better solution where the infamous stairway must be negotiated coming from Cascade Locks. That is a real bear with a recumbent loaded for touring. It requires removal of the cargo and two people to carry up each bike (at least if you are our age). The wheel tracks are useless with the long wheelbase, the stairs are steep, and frequent landings require careful hoisting of the bike to avoid damage to the drive train.