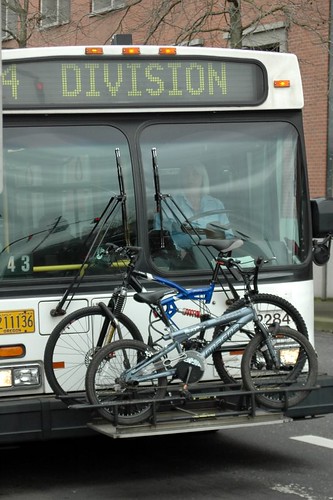 TriMet says its drivers are temporarily emphasizing a longstanding rule that bikes loaded on its bus racks ares supposed to be stripped of bulky accessories before boarding.

According to the transit agency’s bikes-on-buses policy, these rules apply to “panniers, child seats or any object that could block the headlights or the operator’s vision.”

We heard about this after two readers sent accounts of bus drivers telling people to remove such add-ons before boarding. TriMet Bicycle Coordinator Jeff Owen confirms that it’s “a reinforcement of our messaging for a while.” The issue may take new importance due to TriMet’s newest bus model, which improves driver lines of sight by extending its windshield almost as far down as the rack.

This is definitely a problem for Portlanders who have permanently affixed some of the huge variety of available bike accessories to their vehicles. Still, it’s at least useful to know the reason for the policy, to make sure your bike works within drivers’ safety constraints.

Though TriMet bus racks are far from perfect — for example, years of experimentation have failed to turn up a design that lets TriMet buses fit three-bike racks into the turning envelope of Portland’s narrow streets — being able to load a standard bike onto a bus is something that it’s useful for every bike user to know how to do in a pinch. Here’s TriMet’s video explaining how it’s done:

Or if you prefer, here’s the timeless “bike rack rap” from TARC in Louisville, Kentucky:

I wish the bus drivers would emphasize “exit rear door”…

Because you are suppose to inform the driver you are taking off the bike!

Amen to that. preventing cars from parking close to or on intersections would be a start.

they do that… however… http://blog.oregonlive.com/commuting/2010/08/did_that_trimet_bus_just_hit_t.html

I once saw a fire truck try to turn left at an intersection. Some bonehead driver was waiting at the light, overrunning the stop line, and preventing the fire truck from turning. About half the firemen on board leapt off, looking super-pissed off, and encircled the car, ordering it to back up to where it was supposed to be. This went on at rush hour, and was witnessed by a lot of commuters. The driver of the car looked as if they just wanted the earth to swallow them whole. It was perfect.

Define “can’t” :-). Busses are pretty big, I’ll bet they could make that turn with the car in the way. “Sorry Mate, I Didn’t See You.”

I wasn’t talking about waiting traffic, I was talking about cars (with no occupants) parked in the street. Drives me nuts in this city, especially when I am at a four way stop and it looks like someone is in the car and I’m trackstanding waiting for them to go!

People don’t already do this? I remove all accessories from my bike before loading it on the rack… not because of the driver’s vision, but because I don’t want them to fall off.

And driver visibility is a legitimate concern. I’m not sure how car drivers with fuzzy dice can finish a trip without crashing, frankly. My wife tried to hang a My Little Pony Rainbow Dash plush on our rearview mirror a few weeks ago, but I no-sirred it. Safety rules.

You should be concerned about the dirvers vision!

Roof racks would solve all these petty concerns.

Yep, I take off everything that’s not bolted on to the bike – yes for taking off lights, water bottles, bags, etc (as they’re removeable and can fall off/get jacked by passers-by), but no for water bottle cages. They’re bolted on. Not too much work while waiting for the bus.

Newb questions: What’s the right way to get a bike in or out of the rear slot when the front one is occupied? Is there etiquette for which one to use if they’re both empty?

Typically, I load to the rear slot if they are both empty as my bike is rather light and I have no issues pulling it up and over if someone else loads theirs in front. To me, that’s just common courtesy. If I am at a stop where another rider is and I think it will be easier for me to get my bike off from the rear rack I encourage them to load on the outside rack.
If I am tired or it’s wet and slippery I release the bracket (holding onto the bike frame), roll the bike forward enough to get a hold, then pull it off the side. Again, however, my bike is pretty easy for me to move around even with one arm. Some cruisers might require more finesse. I have seen some people struggle, though rarely, with heavy bikes on the back rack and then (etiquette?) I try to lend a hand as I usually try to stay near the front of the bus.

Seattle makes you load your bus on the front-most empty slot. I always thought it was a driver safety thing, so they can clearly see where the front of the rack is, but I guess PDX doesn’t have that rule?

I’ve never had a problem extracting a bike from behind another by grabbing it from the side of the rack, although it’s kind of awkward. Another good reason not to have accessories on your bike complicating the process.

I can see it both ways: the initial reaction is to load the back slot first if both are empty, since it will be easier for the next person to load a second bike, but I’ve heard some bus drivers prefer you to load the front slot first, since it gives them a visual reference to where the front edge of the bike rack is.

This is sort of concerning. What about baskets? Like these which are permanently affixed to your bike?

Sunny
Reply to  was carless

Robert Getch
Reply to  was carless

What’s more concerning: A bus with limited visibility flying down the road or you being forced to ride the bike you installed a (ever so cute) basket on?

I’m not sure I see the need for a snide remark. Some bikes have baskets installed on the front for the everyday convenience of the everyday rider. Taking it off may require tools. It’s a legitimate question, and has very little to do with “cuteness.”

It is a reasonable thing to discuss. Some people (like ME) might have long commutes that need to be multi-modal, but still appreciate being able to transport something more than a water bottle home from the grocery store. Is a Wald wire-mesh basket hanging off the handlebars OK?

A Wald basket was one of the two incidents that prompted this post. Without having driven a bus on the street, it’s hard for me to say if a basket like this is a visibility issue, but I could also imagine a scenario where the basket isn’t interfering with visibility and the driver just doesn’t happen to remember the reason for the policy. In that situation, maybe it’d help to talk to the driver about how it’s your understanding that the policy is about visibility? Hard to say.

The tri-met instructional video in the article shows a woman loading a bike with a wire front-basket.

Dang. I actually did buy a nice (and not huge) Wald wire basket with the intention of putting it on the front of my bike, so I don’t have to always use a backpack just to go buy a loaf of bread.

I ride MAX almost daily (no issue there) and only take the bus when MAX is down, but the inability to use transit when MAX is having problems would be a real problem. I know, no easy answer here.

Beth Hamon
Reply to  was carless

If you are considering the large double-wide baskets that mount over the rear wheel, consider: (a) how much weight that will add to your bike and (b) how much width it will add. If the combination of the added weight and wdith is such that lifting the bike onto the bus rack will be really difficult, consider smaller, lighter-weight options — or use public transit less often when riding your bike.
It really depends on how many of your trips are going to be multi-modal and how important that option is to you.

I think we need to have a rap-off between the TARC guy and Dynamix (“Chillaxin on the MAX”).

Don’t forget this guide to how/why to put your bike on the bus
http://www.youtube.com/watch?v=boiQKDHq7nk
“I Put My Bike On the Bus” Video

Thank you for bringing this up. My bike has a fixed basket and I use to use Trimet buses for emergency situations, otherwise commute 100% bikesBike. But now I have no back up plan other than locking it up and picking it up later.

I feel like this vision problem is a massive Design Flaw. Why not have a bike hadn’t on the back of the bus? Could probably even fit more that way

Might be issues with theft off the back of the bus where nobody can see, or time to load and then run to the doors?

Not sure how much of a design flaw it is, but I’ve wondered the same thing about the rear rack option myself. I know Lewis & Clark’s downtown shuttle has one. I think the big problem with a rear rack for Tri-Met buses is the fact that bikes are more vulnerable to theivery on a rear rack. But that’s just my gut

Guess I’ll not be riding TriMet. I get the feeling they don’t really want bikes on board anyway anymore.

Or you could use Bikeshare