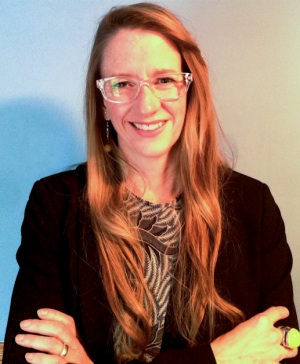 In a statement released this morning, PBOT Commissioner Steve Novick said, “Portland needs a transportation leader who has the budget management background to help us address our deficit in basic street maintenance and who understands the value of sustainable modes such as biking and walking. We know we have found the right person for PBOT in Leah Treat and we are excited to have her join us in Portland.”

Treat has been in government service her entire 17-year career. Her background is in budgeting and finance and the majority of her past positions have been focused on “standing up organizations financially.” Treat and Klein first worked together in Washington D.C. where she was Klein’s deputy director of finance and managed D.C. over $1 billion transportation budget. Prior to working in D.C. Treat served in advisory roles for the governor and Legislature of New Mexico. 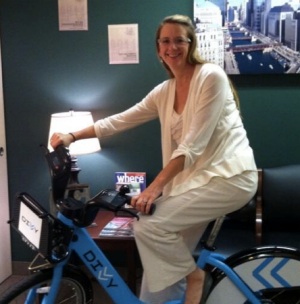 I met Treat last month as part of the candidate selection process. During conversations at that event, Treat described her transition from budget wonk to transportation wonk: “As I worked with Gabe I became more exposed to the creative side of transportation and used my financial skills to get involved with some really fun and creative projects that has created a passion for me in transportation outside of finance.”

In D.C. Treat worked on the roll-out of Capital Bikeshare (the nation’s most successful bikeshare system), open streets and other placemaking programs. Those initiatives gained considerable national attention and Treat and Klein were eventually lured from D.C. to Chicago by Mayor Rahm Emanuel where Treat says “We were trying to implement the same things we’d done in D.C.” Divvy Bikes, Chicago’s bikeshare system with 3000 bikes, is set to open for registration any day now.

Treat says she loves Portland and is “Turned on by the progressive politics and the beauty and splendor of this city.”

In an official PBOT statement, she added that, “I believe Portland to be a national leader in sustainable transportation modes and know we can continue to push an aggressive agenda by developing smart, fiscally responsible budgets, focusing on efficient operations and incorporating smart planning and economic development strategies into future city goals.”

Treat will join Novick, who was recently appointed Transportation Commissioner. They should make a very dynamic pair given that Novick is also known for his creative ideas and fiscal acumen. They face a daunting task of finding more transportation funding and building a transportation system that reflects the goals and plans adopted by the majority Portlanders who want better bicycling access and safer transportation options. It’s a foregone conclusion that the City of Portland will make a major move toward a new transportation funding stream as early as 2014 (there are also rumblings of a statewide transportation funding initiative in 2015). Having Treat at the helm could be a major asset in making sure whatever funding solution we come up with has a positive impact on bicycling.

Treat is married and has four small children. On Twitter she describes herself as a Good government gal with a passion for change in the transportation industry. A Mom to 4 smarty-pants kids and wife to an artsy, intellectual, bike fanatic.”

This is huge news for bicycling and transportation in Portland. Treat clearly understands the value and importance of bicycling and she has the skills and background to move it forward. Both Novick and Mayor Hales are also big fans of bicycling and we are now truly poised to finally start moving the needle once again.

Not sure I like bringing Chicago politics to Portland.
The whole bike share fiasco in Chicago is too close to home.

On the whole she seems like an excellent choice for the post, but you’re right: the dubious contracting process and the close links between Alta and the Chicago staff do have a whiff of corruption.

On the other hand, municipal contracting can be so byzantine and weighted down under its own requirements that Leah Treat could have been working *right there* and never touched the process at all. I’m hoping for clean hands and new ideas.

Because ANYONE who has worked for the city of Chicago is a thug, right?

She probably thought “Is it a good idea to move to Portland, with all the pot smoking hippies and self-involved cyclists”. See, aren’t stereotypes fun?

I just want to say thank you for this one. I’m going to admit, my very first reaction when I read this story was, “oh great, Chicago politics…”

But I had to stop myself and realize that was pretty messed up of me to just assume someone from Chicago would be rude, abrasive, and corrupt. I have no reason to believe Ms. Treat would be this way at all. Heck, maybe she applied for this job because she wants to get away from that kind of culture.

We don’t know and we shouldn’t guess until we give her a chance. We should also remember she will only be successful with our support.

Andrew….now that being said…..I interned with the Chicago Department of environment in the mid-90’s after graduate school. Several of the inspectors did get popped for accepting bribes. Seems like the lower level employees who dealt with enforcement were occasionally on the take…..but the upper managers all had to know someone to get the job.

At least with Portland, it seems that the hiring process is actually ‘open’.

oh I have little doubt there is corruption in Chicago politics. The city government did not get that reputation for no reason. It’s just wrong to assume Ms. Treat is a part of it.

As someone who formerly worked with Ms. Treat when she was automatically promoted from a Grade 11 secretary to a Grade 16 Chief of Staff to the Dept of Real Estate Services because she knew Dan Tangerhlini now head of GSA and not much else. She did not and I repeat DID NOT manage a Billion Dollar budget in DC she could not find her As_ from a hole in the ground was great with the buzz words like “stakeholders” and “keeping engaged with the community” but she was not considered shall we say “intellectually curious” she did not work hard in fact had to leave each day at “4:45 PM” because her “nanny” had to leave and/or was more concerned about the size of her office than what it actually took to manage a billion dollar budget. However, she had the political connections so she has advanced. She was involved in a procurement scandal in DC DDOT left before much happened for Chicago and her mentor Gabe Klein well he was the founder of ZIP CAR and has some shares/stake or did while in DC in the Bike Share company along with Adrian Fenty’s father who apparently received a million + contract under a shell company affiliated with the same Bike Share company (former Mayor who Treat worked for prior). Does she like to Bike yes that much is accurate does she have intellect and work ethic………..politics trumped her intellect and overall ethics in DC not sure how she faired in Chicago…..well Portland you be the judge….if Bike lanes are the main priority I guess this is just what Portland needs….if not, we are praying for you here in DC hope all works out

I wish her luck and will remain optimistic until I have reason not to be.

If I am understanding the hiring process correctly she made the choice to seek this job and come here, which tells me she at least has some kind of vision for what Portland could be and how to make our city better.

Welcome to the Northwest to Leah Treat. Feel free to send some advice and make connections across the river to Vancouver!!! Sounds to me like there are lots of reasons for us to hope for good things and at least some improvement. Good Luck to Leah and to Novick. Crossing my fingers.

Again, I hope some of the better Vancouver city council folks are listening and watching too.

50 bucks she ends up at a cushy Alta job in two years.

“Treat has been in government service her entire 17-year career.” I’m not a betting man, JJJJ, but without further evidence to back up your assertion, your wager seems both unlikely and disrespectful. Does Alta have a history of poaching high profile politicians? Why would you bet that she won’t even last the four year term of Mayor Hales?

“Why would you bet that she won’t even last the four year term of Mayor Hales?”

Because in that 17 year history of public service she hasn’t kept a single job for four years, she is a ladder-climber.

What world are you living in? A four year term at any job in the modern realm is above average.

I have read in other sources the maximum term at one position is only 2 years. Two years is not enough to establish an impact, or guarantee continuity. That’s too bad, as her credentials are quite good.

Welcome, Leah! We’re excited to have you at PBOT.

ah yes, the O’live commenters are having a great time with this one…

I think there will be a lot to say for some time to come.

Font A. Nelle
Reply to  Spiffy

As they seem to be right here, as well.

Welcome to Portland…So long as you left the snow and humidity back East! 🙂

First of two wives for Jacob…

A Certified Executive Chef does not need to be a Pastry Chef. They just need to know how and where to find a great one.

I would like to welcome Leah with this message…

NO TO BIKE SHARING, YES FOR REAL BICYCLISTS!

Btw, having a husband who is a bike fanatic doesn’t add to Leah’s credibility as a champion for bicycling. Ex-NYC Transportation Commissioner Iris Weinshall and her husband NY Senator Chuck Schumer, who is an avid bicyclist, wanted to have a bicycle lane removed from in front of their home!?!?!?!?

Please don’t take this the wrong way because I respect your position that you don’t like bike share (even though I don’t agree). However, you aren’t doing your argument any favors at all when you make broad claims about “real” bicyclists vs. bike share.

I am very much a “real” bicyclist. I ride my bike nearly every single day. I am about as real of a bicyclist as one could ever be. When bike share comes to Portland I plan on using it. You know what else is crazy? I subscribe to car share as well and I’m very much a “real” driver when I use it.

If you want your argument to be heard and respected you need to stop creating a false conflict of interest.

I’m a real driver too, unfortunately, there isn’t a car sharing system for me to subscribe to where I live.

Yeah, I get what you are trying to say. What I am telling is you is that it doesn’t come across that way and as such your arguments are incredibly easy to dismiss as ignorant.

Yet bikeshare is privately funded? So how is it “taking infrastracture away”?

Again, I don’t understand your dog in this fight. You don’t like bikeshare, great! Don’t use it. The only possible way it will impact you is that you’ll have to share the roads with a few more people on bikes.

So you are saying you would use a car share, then?

“Treat has been in government service her entire 17-year career.”

Awesome, another person who has never held a real job telling us what to do.

Is your statement more of a Tea Party,or Occupy styled critique of government? It is very difficult to interpret intent on the web.