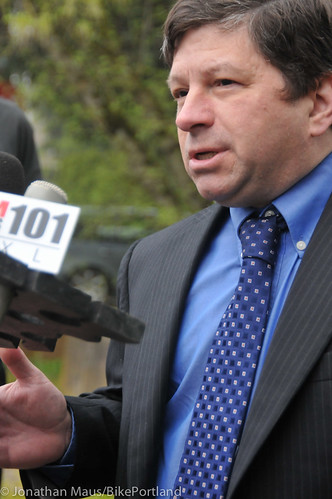 Mayor Charlie Hales has just announced the city bureau assignments and he’s given the Bureau of Transportation to Commissioner Steve Novick. Another bureau shake-up that impacts bicycling is Portland Parks & Recreation now being in the office of Commissioner Amanda Fritz instead of Nick Fish.

Hales took all the bureaus under his authority when he came into office in order to more effectively tackle a major city budget shortfall.

The assignment of PBOT to Novick is good news. I do not have a lot of experience working with Novick (he’s a City Council rookie); but I’ve been hearing from various sources for months that he’s very solid on transportation issues, that he gets the big picture, is very supportive of bicycling and walking, and won’t be afraid to try new things. Novick, who graduated from Harvard Law School at age 21, is also known as someone with a sharp policy mind.

“The cost of health care and the cost of cars and fuel are huge burdens on families and businesses. We can reduce health care costs NOW by promoting biking, walking and transit.”
— Steve Novick, City of Portland Commissioner of Transportation

In 2009, Novick appeared at a rally to protest the 2009 Jobs & Transportation Act that handed out nearly $900 million in new highway projects across the state. Novick attended a press conference in opposition to the bill by Bob Stacey, the former director of 1000 Friends of Oregon who’s now a Metro Councilor and respected critic of highway projects, the Columbia River Crossing, and so on.

Novick was endorsed by the Bike Walk Vote political action committee in April 2012. That group’s Co-Chair Peter Welte said that Novick, “has been a champion of public health for decades,” and that he, “deeply understands the intersection of community health with healthy transportation and land use planning.”

In his responses the Bike Walk Vote’s candidate questionnaire, Novick said he’s a believer in the parking concepts of Donald Shoup and he’s open to high parking rates as well as congestion pricing. In a 2012 campaign interview for Portland Afoot’s low-car voter guide, Novick expressed skepticism about expanding Portland Streetcar; endorsed transportation revenue changes such as a higher gas tax, per-mile tax and anti-congestion tolls; and said he would “like to continue to support” Sunday Parkways but didn’t see it as the city’s top priority.

On the Columbia River Crossing project, Novick told the Portland Business Alliance during his campaign that he shared U.S. Rep. Peter DeFazio’s skepticism that the region can afford the project as planned. Novick endorsed “a phased approach, starting with components that can improve safety and freight movement within a feasible budget.”

At a Bike Walk Vote candidate event in April 2012, Novick tried to rally the crowd by calling out a certain local media outlet: “The next time The Oregonian runs a misleading headline saying that it’s because of bike lanes that people aren’t having their streets paved, I want all of you to march down Broadway and occupy The Oregonian!”

Last April, Novick supported Mayor Hales’ move to restore funding for a sidewalk project on SE 136th Ave. At that event he floated a new idea on how to fund missing pieces of sidewalks. Novick also attended the recent Alice Awards Party put on by the Bicycle Transportation Alliance and he was a volunteer in the recent Portland Afoot transit scavenger hunt event.

And Novick is far from a political amateur. He put together a solid campaign for U.S. Senate back in 2008 when he lost to Jeff Merkley.

The other big news for bicycling in today’s bureau assignments is that Commissioner Fritz will now be in charge of Parks. This is significant given the major role the Parks Bureau plays in a variety of bicycle transportation and recreation capacities. Former Parks Commissioner Nick Fish has been a big part of the talks to improve bicycle access in Forest Park. The Parks Bureau is also currently working on the North Portland Greenway project which is part of a TIGER grant application.

Fritz has a mixed record around bicycling. She expressed an odd policy position on bike share in 2011, saying she wouldn’t support it until there was no more “dangerous” bicycling downtown. That said, Fritz is a Registered Nurse and someone who watches the budget very closely. Given that bicycling promotes health and offers the best return on our transportation investment, she should have no problem supporting it when the time comes.

Interesting development that gives some hope…especially given the botched handling of the no / low parking parking multi-family developments of recent history.

I’m loving the coverage from Europe.

Welcome Steve! Looking forward to your leadership at PBOT.

I wonder how much of a role he has had / will have in selecting the new PBOT Director. According to Jonathan, the search is down to three finalists who have endured pretty rigorous scrutiny. It wouldn’t make sense for Novick to have not been a big part in the final interviews considering the Commissioner in charge of a bureau has pretty wide leeway in replacing directors whose style and vision does not match their own.

Novick is one heck of a smart guy and willing to listen and learn. I am somewhat cautiously very optimistic about this assignment.

“And Novick is far from a political amateur. He put together a solid campaign for U.S. Senate back in 2008 when he lost to Jeff Merkley.”

Probably important to note for anyone who has moved to Portland recently is that Novick lost in the Democratic primary against Merkley. As in, Novick is a Democrat, not a Republican as running against Merkely might imply.

Novick lost when the Dem Party of Oregon tipped the scales at the last minute and put its $$$upport behind Merkley, feeling he was the most electable candidate. Oregons loss is Portlands gain.

This is my favorite quote from the Bike Walk Vote survey: “Safety is a very high priority, but I suppose if it were the highest priority, driving would be illegal.”

He goes on to endorse 20 MPH by default, and other sensible traffic calming measures. Worth a read.

Novick seems to me to be a sharp, practical kind of guy. I trust that he’ll do a good job. However, I’m a little worried about having Fritz in charge of parks… she seems a little flaky. (Hopefully I’m wrong on this assessment…we’ll see).

Being a psychiatric nurse has served her in good stead so far. She has been supportive of Parks recently when she helped wrangle a happy solution to the Pier/Chimney Park Sequoia-ADA trail- NP Willamette Greenway imbroglio. I owe her and the Parks dept many thanks.

As a mountain bike advocate, I echo your concerns with Ms. Fritz. In an email exchange we had, she wrote the usual myths surrounding mountain bikes as facts. I worry she has an anti-mtb stance and will set back the hard work that has been occurring the past few years, but I hope I am wrong.

When I saw Novick’s face and read of his new appointment, I was happy…
Then I returned to read the entire post with news about Fritz…
my brain said..”good news-badnews”… :-/

1. $900 Million for highway projects?! Ouch. Next time I hear someone futzing about the few million here and there for bike infrastructure that returns huge benefits to society… I’ll have this one planted in mind. :-/

…and of course Oregon theoretically is going to magically come up with $450 million for the CRC right? Oh dear me o’ my. o_O

2. That statement, “Safety is a very high priority, but I suppose if it were the highest priority, driving would be illegal.” is one I commonly put forth to people. However, I’m mostly just for fixing designs and cleaning up cars (i.e. getting rid of internal combustion for cleaner fuels) and actually relegating cars to non-single occupancy use or “utility trips” only. The car as a mode to commute is insane…

But I digress, great write up on the current political sitrep for Portland!!

and from his street roots bio, more importantly than his Harvard pedigree, he was “New Jersey born.” This is a man who has seen the dark side first hand, who was born breathing miasma of tailpipe toxins, whose aesthetic and moral sense was honed amidst multi-lane nightmares, death defying roundabouts, massive suffocating parking lots, off gassing lawns and fertilized ground water, yet he has not become inured to such depravity due to his escape from the Garden State. He is surely a man whose being is so indelibly infused with the discomfiting presence of imminent motor vehicle-catalyzed apocalypse that he will always carry a bit of that horror to remind him what is at stake. This is a man who will never rest on his laurels!

Novick is awesome, the only politician I can think of who appears to have both his head and his heart in the right place. Hoping for a mayoral run sometime soon.