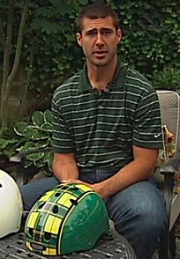 Harrington in a news clip a
few weeks after the collision.
(Photo: KATU-TV)

Back in August, former NFL quarterback and star at University of Oregon, Joey Harrington, was riding his bike on SE Foster Road when someone driving a car struck him from behind. It was the hardest hit of Harrington’s life. Now his charitable foundation wants to channel the attention from that collision into an annual ride that raises money for “childrens’ bicycle safety.”

“Last summer Joey was hit by a car while riding his bike on the streets of Portland. The foundation would like to channel the attention from this accident to educate our community to the hazards associated with bicycle travel with the aim of reducing and preventing injuries to children.”

The Bridges to Breakers – Helmet for Kids Century Bike Ride century will take place on September 30th 23rd. The route will go from a McMenamins pub in northwest Portland to a McMenamins pub in the coastal town of Gearhart for a total of 100 miles (with fully stocked rest stops ever 20 miles along the way). Entry fee is $100, with an option for riders to raise another $125. Funds raised through the ride will be used to purchase helmets, which will then be given to local non-profits for use in youth bike safety programs.

Riders can pick from one of four organizations to donate their entry fees to. The list of orgs includes: the Harrington Family Foundation, Children’s Cancer Association (CCA), OHSU Sports Medicine Orthopedics and Rehabilitation, and the Bicycle Transportation Alliance (BTA).

The focus on helmets likely comes from the fact that Harrington credits his for his life — or at least his life without a serious brain injury. According to a story in The Oregonian published after the collision, an OHSU trauma surgeon said without a helmet, Harrington would have suffered “severe head injuries.”

Registration hasn’t opened yet, but you can learn more at the Harrington Family Foundation website (the official event website will launch by mid-March).

how about instead of riding for helmets, they ride for stricter enforcement of traffic laws for motorists who injure and kill vulnerable road users

Doesn’t have quite the same ring to it, though… 😉

probably because the majority of bike accidents in kids have nothing to do with motor traffic?

Um, he’s right. My daughter has crashed her bike at least 100 times. There has never been a car involved. At least one that wasn’t parked. Multiply that by 100 million and I think Joey is on to something.

Every time I’ve crashed my bike as an adult there haven’t been any motor vehicles involved either; nevertheless, children do have a higher crash rate with motorists than adults, but the types of crashes are different, usually ride outs into the street from a drive way or a sidewalk.

We’re talking about kids here, so for one minute get off your soap box!!!! He is trying to do something positive and in perfect portland fashion you are pissing in his cheerios. You would would probably want to change the language of lung cancer fundraiser to a “stop smoking stupid” fundraiser

Sounds good. Let me know when you have the ride organized and I’ll be happy to participate. In the meantime I think it’s cool that Harrington is using his resources and lending his name to an event that will have a positive outcome on kids riding bikes.

I can’t control what other people do, but I can control whether I wear a protective device.

BURR
how about instead of riding for helmets, they ride for stricter enforcement of traffic laws for motorists who injure and kill vulnerable road users

Thank you BURR! Someone had to say it.

Why does the foundation describe “the hazards associated with bike riding” as if riding is the problem. Joey wasn’t hurt riding his bike…he was hurt when a CAR hit him.

I agree. A language change should be in order.

When I was a boy I rode to and from school and did a newspaper route all over Pasadena, CA every day on my bike; that was in the 60s. I doubt conditions were any more “dangerous” then. Nobody wore helmets.

Now we teach kids that bicycling is dangerous and a styrofoam hat must be worn.

The elementary school I attended had a huge bike rack area. Today there is nowhere to park a bike at the school.

The automotive and oil industries have done an excellent job convincing the public that biking is a fearful activity. Just buy a car and follow behind another tailpipe. Now kids get fat and develop diabetes as teenagers.

When I was a kid I just rode my bike. I suppose these days somebody has to drive you around all the time.

True Drew. Even when I was a young lad back in the 90’s, I used to ride my bike up SE Duke St from 52nd to 80th beginning in 3rd grade to Woodmere Elementary. And yes, we had multiple bike racks. Somewhere around three or more. I’m not sure if they are still in place.

On a Harrington note, I’m very thankful he is raising money for biking safety and such. However, it would make more sense for him to advocate for safer streets especially in East Portland.

Where he was hit on Foster Rd, the bike lane abruptly ends and merges into 35MPH traffic coming off a freeway. Plus, the Spring Water trail exit at 101st ave sends you directly onto Foster if you want to go west. I feel area was a factor in his crash as much as anything.

Anyone know a good way to contact him or get him talking about the area he was hit?

The vocal minority of anti-helmet propogandists has become annoyingly predictable and boringly repetitive.

You are clearly a shill for Big Helmet. Why don’t you support the Future Vegetables of America? Head trauma is *COOL*!

What are you going to do next, cite some obscure fact about how most cycling mishaps are single-vehicle?

as have the nanny state helmet proponents

BURR
how about instead of riding for helmets, they ride for stricter enforcement of traffic laws for motorists who injure and kill vulnerable road users
</p

I second this, except that I want stricter enforcement of traffic laws for motorists before they injure or kill.

Super cool Joey! Thank you for jumping in and doing something proactive…we need all hands on deck, and all the different perspectives to get the work done.

Kudos to Joey making something positive out of his experience. I support his efforts of making bicycling safer for children. That IS something. However, I drive past an elementary school every day and parents dropping off their children at the school don’t stop fully at stop signs, they speed, they talk on their cell phones, all in the school zone around other people’s children, sometimes with their own kids still in the car.

I’m sure most children of these same parents have bikes and the parents want them to be safe riding them. But it is not enough for bicyclists to ride lawfully and with all the safety equipment available to them. Kids aren’t going to be riding in the (relative) safety of their cul de sacs forever. I’ve seen irresponsible cyclists, we’ve heard of them in the media, but cyclists do not cause the damage that motorists can and do. Motorists need to take their responsibilities behind the wheel seriously and give driving the full attention it deserves.

We need stricter laws, and in some cases a law at ALL (like for those who drive on a suspended license and they injure or kill someone but somehow they didn’t break a law ????), and we need enforcement of the laws.

BURR
how about instead of riding for helmets, they ride for stricter enforcement of traffic laws for motorists who injure and kill vulnerable road users

Because Joey wants to host an event promoting helmet use by kids. Rather than whining and criticizing, why don’t you put on your own event and the focus can be whatever you want it to be.

Sorry, but making cycling appear more dangerous than it really is by fear mongering about helmets is not promoting cycling in any way, shape or form.

Sorry, I disagree that promoting the use of helmets is “fear mongering” that makes “cycling appear more dangerous than it really is.” As evidenced by the number of cyclists in Portland who regularly wear helmets, it seems like the majority opinion is that wearing a helmet is a reasonable safety precaution. Don’t agree?, you are of course free to try and change people’s minds. Snarking about an event put on by somebody who credits a helmet with saving him from a serious brain injury, however, is not particularly persuasive to me.