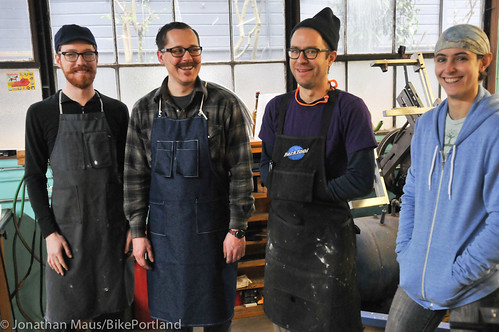 Behind the door of a non-descript industrial building on SE Ankeny Street, four bike builders have come together to ply their trade. Each one is at a different stage in their careers, yet they all share a love of making bicycles and a desire to build a business around it.

1515 SE Ankeny is the new home of Cycles J. Bryant, Bantam Bicycle Works, Cycles Cooper, and Telos Cycles. Earlier this week I paid them a visit. 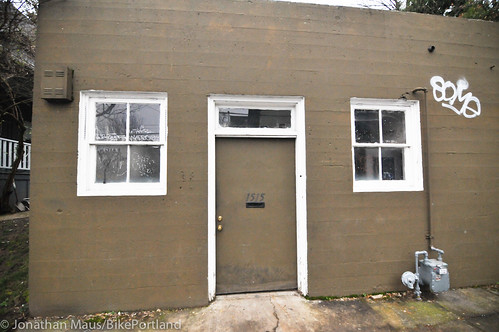 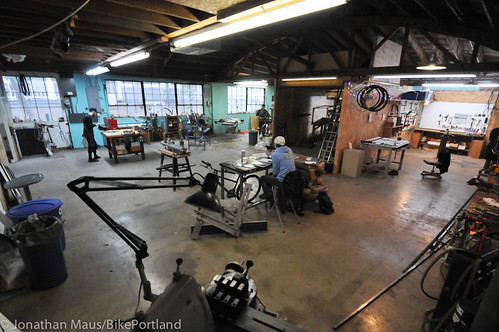 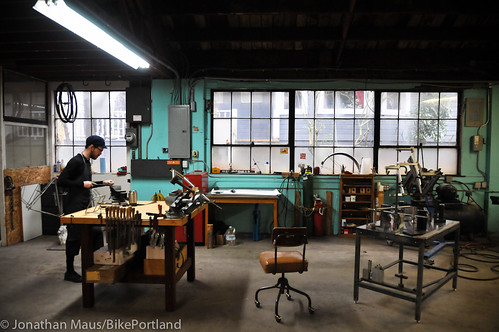 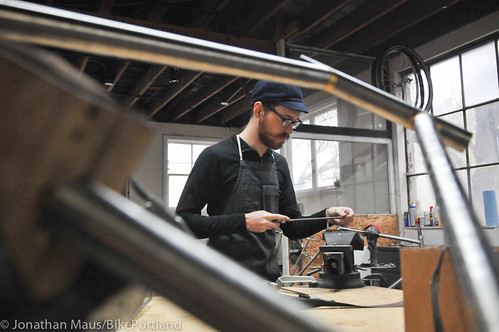 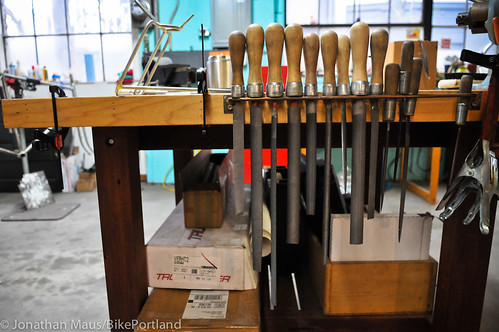 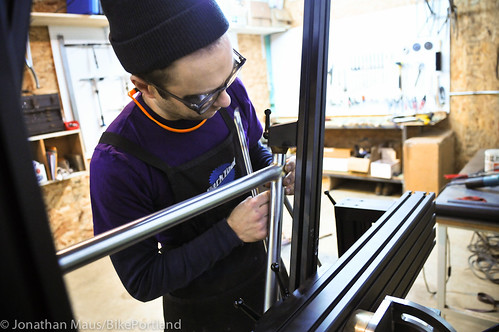 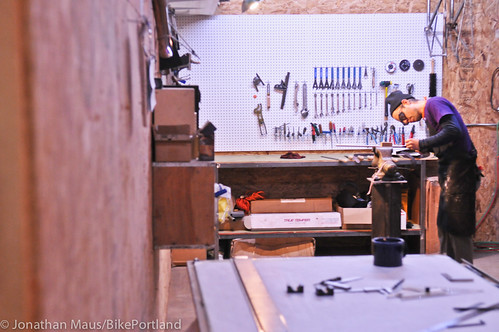 The four builders; Joshua Bryant (Cycles J. Bryant), Bob Kazmelski (Bantam Bicycle Works), Travis Cooper (Cycles Cooper) and Tess Velo (Telos Cycles) have each carved out a quarter of the 2,500 square foot shop space. Bryant, 33, is in the far corner. According to him, the space came about by fortunate timing and the sheer power of Portland’s deep bike industry network. He and Bob Kazmelski met each other online through Flickr, a photo-sharing site. Then Bob got to know Travis Cooper from working together at Citybikes (a bike shop down the street). Bob also had become friends with Tess Velo after she took his framebuilding class at United Bicycle Institute.

“We were just ready to get our of our basements,” Bryant said. A fan of French randoneurring bikes (and all things French if the large French flag, the “franco” in his email address and his long twisty-ended mustache are to be taken as clues), Bryant is the closest of the four to being a full-time bike builder. With three years of professional building under his belt, he hopes to be working in the shop full-time by next month. 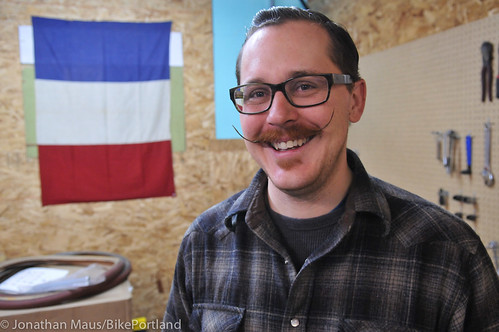 Bryant says their are clear advantages to sharing space. Camaraderie and costs are the most obvious: Bryant hosts a weekly Sunday Shop Ride that has gained a steady following and there are several large machines they all share. Besides lower rent, Bryant points to the mix of backgrounds each one of them brings to the table. “We can bounce ideas of each other. I think we’ll all grow from this experience.” As proof of this idea-sharing, Bryant pulled out a chainstay tube and a cable stop. “See. Bob showed me this. He takes a rare-earth magnet to hold the stop to the tube. It’s much easier than some complicated jig. And it works. Why didn’t I think of that?!” 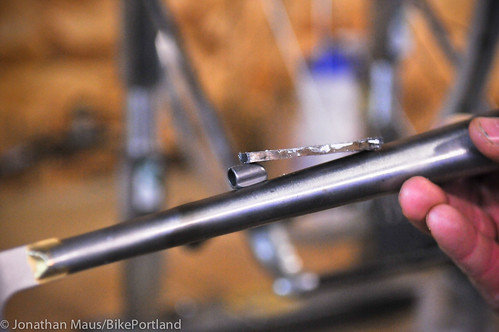 Across the shop floor, 29-year-old Tess Velo (yes, that’s her real name) looks over a shop tool parts catalog. Velo’s day job is managing the Joe Bike store at SE Cesar Chavez and Lincoln. She’s found a great situation at 1515 SE Ankeny. With shop tools given to her by Joe Bike owner Joe Doebele (after using them to build the Shuttlebug cargo bike), Velo now works just a few yards from Bob, her former instructor at UBI. “This was such a good opportunity. I a cool mix of people and a great location.” Velo hopes to use the space not only build bike frames (so far, she’s only got orders from friends and family — a common way to start out), but to do other metalwork as well. She’s currently working on a project for the Portland Aquarium. 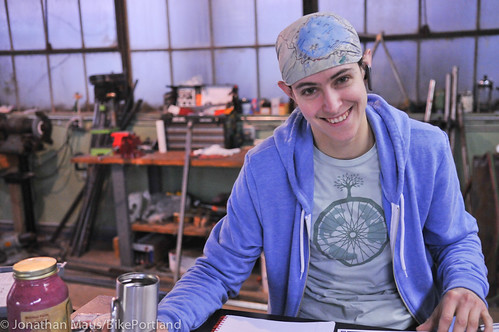 Bob Kazmelski, 37, is the most veteran of the four and 1515 SE Ankeny was his brainchild. “I knew Jordan [Hufnagel, a framebuilder] was moving out, and I was like, ‘Hey Jordan, what’s going on with your shop space?'”. Kazmelski has seven years at Bilenky Cycle Works under his belt and moved from Philadelphia to Portland with his family a year-and-a-half ago. These days he’s doing Bantam Cycle Works part time, while also teaching a bit at UBI. He spends most of his time taking care of his five-and-a-half year old daughter. Used to the bustling (and small) Bilenky shop where eight people crammed into a space much smaller than this one, he said, “I think I’d get lonely working by myself.” Kazmelski added that ideally he’d be able to build bikes full time, but he’s taking it as it comes. 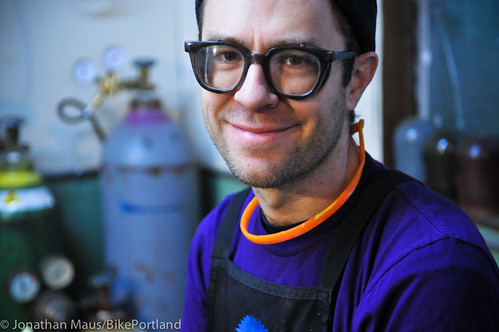 For 28-year-old Travis Cooper, another recent transplant who came to Portland from Kentucky, just having space to stretch out is a huge advantage. Cooper apprenticed for three years under noted builder Doug Fattic and has spent the last year building his own business. To make ends meet, Cooper still works part-time at Citybikes. “I’m almost there [being a full-time builder], but not quite.” He used to work out of a small garage where he’d have to move things out of the way just to get a bike into the welding stand. “This,” he said, stretching his arms out as wide as they’d go, “is awesome.” 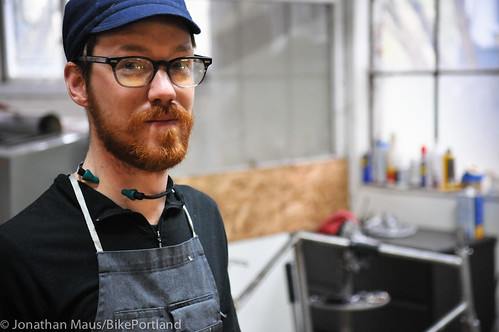 Portland has a long history as a home of framebuilders. The up-and-coming tenants at 1515 SE Ankeny are a clear sign that that legacy is as strong as ever.

*Elias Grey of Lemolo Bags also works at the shop, but he wasn’t there when I stopped in.

Great story! I wish these folks all the best. It seems to be an ideal situation, as this sort of creativity can’t be in a vacuum. Any plans for an Open House in the future?

TonyH,… Yes we are planning an open house in a few months. More details to come when we settle on a date.

Thanks for the reply, and I look forward to the open house.

Way to go, y’all! Best of luck with this exciting endeavor.

Great article! This satisfies the curiosity of many an Ankeny commuter! Great site for a frame workshop. All they need now is a funky mural.

Next: find out who did the beautiful and creative bike-part sculpture a few blocks east of there.