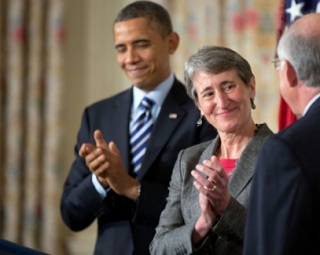 If you’ve been biking for a few years, chances are you have something in your closet from national outdoor retailer REI. Now the CEO of that company, Sally Jewell has been picked by President Obama to be Secretary of the Interior. With that job comes the rather large responsibility of managing our public lands — many acres of which include (or should include) bicycle access.

Not surprisingly, people who care about the outdoors and about bicycling are thrilled at Jewell’s nomination. REI is a company that has built a solid reputation for not only their commitment to selling bicycles and bike products (not to mention their highly regarded Novara brand), but they are also good partners in the communities they operate in. They regularly donate to bike-related non-profits and they host bike events and clinics at their stores. For many people, the local REI is also the local bike shop.

In announcing the pick, President Obama said Jewell is the perfect person to moderate the debate about how to balance outdoor recreation and conservation with “creating jobs” and economic development:

“She knows the link between conservation and good jobs. She knows that there’s no contradiction between being good stewards of the land and our economic progress; that in fact, those two things need to go hand in hand. She has shown that a company with more than $1 billion in sales can do the right thing for our planet.”

“We’re excited about the appointment – everything about REI and the company she has presided over suggests that she will perfectly blend and balance the recreation, preservation and stewardship elements of the Interior position. Our nation’s public lands are a treasure to be preserved and enjoyed, and of course we believe that enjoying them from the saddle of a bicycle is by far the best way, and the most effective way to engender a culture of stewardship in all generations.”

“Sally Jewell is a great pick… As the CEO of REI, she’s done an excellent of blending and balancing recreation and conservation interests. REI has been an exceptional supporter of a wide variety of projects and organizations that preserve public land while encouraging outdoor recreation and stewardship. REI has been a constructive bridge between different groups. She understands mountain biking, the importance of easy bike routes for people of all ages, and the value of the recreation tourism economy. Her experience and outlook should help improve bicycling on public land. This will benefit bicycling and the bike industry.

The Department of Interior manages 500 million acres — about one-fifth of the land in the United States — and offers abundant bicycling opportunities, both on pavement and on dirt roads and trails. We hope to work with Sally and her team (and our time-tested partner, IMBA) to improve bicycling on public land, particularly by making it easier and more appealing for families and children to bike in national parks, national recreation areas, and on BLM land. That’s what we’re doing in cities through our Green Lane Project*, and that’s what we hope to assist on public land, coast to coast.”

“From what I have read and heard I’m very excited about Ms. Jewell.

Cycle Oregon has been lobbying National Parks for years to get Crater Lake closed for a half day so we could have a safe ride there last year. I upped the conversation in my meeting with Senator Wyden saying I’d like to see every National Park closed to auto traffic for a half day each year in celebration of Active Transportation. He loved the tie-in to healthy lifestyles and with his senior position now as chair of Committee on Energy and Natural Resources he’s in a position to follow up on that — especially if Sally Jewell was heading things up!”

Sounds like we can expect great things from a Secretary Jewell. Time will tell how she manages the balancing act, because as we all know, the Department of Interior isn’t all about recreation. They also manage permits for oil and gas companies, and Jewell just so happens to be a former Exxon/Mobil employee. For more on her background and the outlook for cycling under her tenure, read today’s coverage from Streetsblog DC and Bicycle Retailer & Industry News.

I’d be excited if she’d been appointed for transportation, but the Dept. of Interior is infamous for handing out fracking permits like candy, not for building bike lanes.

If she stops the fracking, the middle class will get smaller and smaller. I hope she takes a balanced approach

And don’t forget the Forest Service is in the Department of Agriculture. Interior lands are tribal, BLM, wildlife refuges and national parks.

Jay–your idea is fabulous! There are some state parks in Washington that could be great for a half-car free day. I will email my congresswoman.

I would love to hear how the right-wingers feel about this appointment. Sally Jewell has indeed built a great company — which they should like, but will likely be substantially more restrictive (i.e., limiting petro exploration on public lands) than they would prefer — is that a net negative or a net positive?

Given that I live in SE Portland and don’t actually know any Republicans, I rely on you, Jonathon, to ask a Clackamas city councilman his/her opinion. 🙂

Chris I
Reply to  Dan

Making our National Parks and other public lands friendlier to both road and mountain biking would be welcome. Many national parks are spectacular places to for road riding, but the roads are often wickedly narrow and filled with high volumes of not-carefully-driven cars.

And even without necessarily opening up singletrack to bikes, there are huge opportunities for off-pavement biking. The National Park Service often sees no distinction between bikes and motor vehicles, so when they close an old jeep trail to motors, they close it to bikes too. In Death Valley alone, we lost access to hundreds of miles of old roads and ways when it was converted to a national park a few years ago. IMBA has been working with NPS for years to pilot a few mountain biking projects in national parks, but Sally Jewell could help accelerate that process.

I would LOVE to see a car-free day, or even half-day, in many of our national parks and other public lands. If we can do that for the Christmas lights at PIR, surely we can do that occasionally in our parks.

Just an observation about REI, probably relevant to nothing. I have been a member for over 40 years. When I joined, it was an ‘outdoor’ store. You went there to get backpacks, tents, boots, climbing gear, etc. Now, if you go to REI, you realize it is primarily a clothing store. It is filled with all kinds of shirts, pants, socks, etc., which are primarily ‘lifestyle’ products. They are not constructed particularly sturdily; they lean more to outdoor fashion than hard use. My guess is that most of the products are used to go to Starbucks, picnic, or just everyday living. There’s nothing wrong with that, just don’t get it confused with outdoor sports. REI does do a lot of good, too, trail-building support, etc.

I would echo Steve Scarich’s opinion of how REI has evolved over the years. When I joined over 20 years ago (at their then-HQ store in Seattle) it was a lot more outdoor-oriented, and it was always easy to find employees knew the gear backward and forward. The last decade or so it’s definitely become more of a lifestyle store. They still have a lot of the gear, but in my experience this shift has also coincided with increasing difficulty in finding employees on the floor that actually know and use the gear.

Gotta get the non-outdoorsy muggles out IN the out of doors first before the majority of couch dwellers realize that nature is something to be saved and conserved.
Unfortunately this means catering to the shallow desires of noobs and hipsters.
Luckily the only type of “brick-and-mortar” store which is surviving the internet retail revolution is the hyper-specialized pro shops. Sure people might be able to buy a cheap steel bike frame online but if you are dropping $3000+ on one of Ahearn’s best you’ll go see in person to talk.