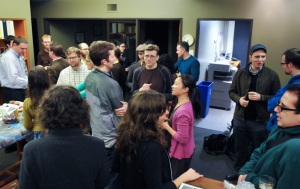 Last night our friends at Lancaster Engineering and I were honored to host another Wonk Night. A few dozen of Portland’s smartest transportation thinkers showed up for some in-depth and wide-ranging discussions about policy, politics, and projects (and yes, some of them might have just been there for the free beer and snacks).

We had several staffers from the Portland Bureau of Transportation (PBOT), the Oregon Department of Transportation (ODOT), lots of professionals who work in the transportation field, several planning/engineering students, and a smattering of citizen activists. It was a great mix!

We’re still finding our way with Wonk Night; but I feel like something special is beginning to emerge from these last two events. The level of candor and detail we’re able to get to is something you just don’t hear anywhere else. At things like advisory committee meetings or open houses; the engineers, consultants, bureaucrats, and advocates always have a filter on. As a member of the public, it’s hard to get beneath that filter to the really good stuff. At Wonk Night, I try to facilitate open, candid discussions, while still making everyone feel supported and respected. Based on what was shared last night, I think it’s sort of working.

We started things off with a crash course on “TRB,” the annual meeting of the Transportation Research Board that just wrapped up in D.C. last week. Several folks at Wonk Night attended the event and shared their experiences and feelings about it. Lancaster Engineer’s Brian Davis said he came back feeling optimistic and inspired for his work. “TRB was fun,” Brian said, “The research people are doing is about trying to quantify all the stuff we comment about on BikePortland.”

PBOT Division Manager of Signals, ITS (intelligent transportation systems), and Street Lighting Peter Koonce painted a less rosy picture. His main concern was how urban issues are not well-represented on the TRB agenda. Since states are closer to the federal funding and policies, TRB (and by default, the transportation research power structure) tilts much more heavily toward states, counties, and rural areas. Koonce said he mentioned the “8-80” concept — which is about building infrastructure that’s safe for all ages — while on a panel and, “It was the first time many of them had even heard it.” “We have a long way to go,” he added.

Hau Hagedorn from the Oregon Transportation Research and Education Consortium (OTREC, a research funding group) said for them, TRB is all about engaging the next generation of engineers and planners. She pointed out how they sent 30 students from Portland State University to the conference. 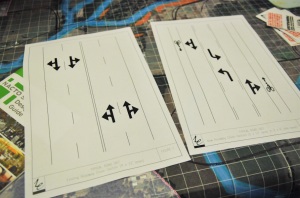 The discussion then shifted toward the opportunity for PBOT to invest in major bikeway access in downtown Portland. Talks about this project are going on right now between PBOT, the BTA, and the Portland Business Alliance (PBA). Technically, building a network of dedicated/protected bikeways is possible downtown. I learned last night that thanks to policy adopted in the Central City Transportation Master Plan the City can ignore performance measures downtown. This means they do not have to adhere to the strict minimum capacity guidelines when they consider re-allocating roadway space.

Unfortunately, last night it became clear that the future of this project will be all about politics (surprise!). The good news is that the BTA’s Sadowsky says for the first time ever, it seems the PBA is not fighting the bike access improvements. One of the many moving parts impacting this project is which City Commissioner will oversee PBOT. Sadowsky said he’s hearing it will be either Dan Saltzman or Steve Novick. I’ve heard from sources Mayor Charlie Hales intends to keep it in his portfolio. We’ll have to wait and see. 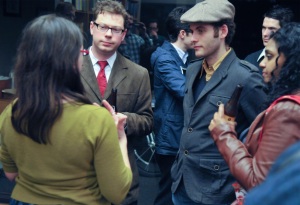 We then turned to Barbur Blvd. As we’ve reported, there’s a movement afoot to push ODOT toward a road diet that would add a nice bikeway on this crucial north-south artery from southwest into downtown Portland. ODOT’s Region 1 Active Transportation Liaison Jessica Horning opened things up by sharing an update: She said a road diet for Barbur has been short-listed for possible further evaluation by Metro in their ongoing SW Corridor planning process. This could move a recommendation forward as early as April of this year. Stay tuned for more on that front from Metro in a separate post.

As for the technical feasibility of the road diet, Mike Ard from Lancaster Engineering said his analysis of average daily traffic volumes show that this section of Barbur could easily handle a lane re-allocation. “The lanes aren’t what would cause a bottleneck, it’s the signalized intersections on either end where you might see congestion.”

While everyone in the room seemed to feel a fix on Barbur is urgent; ODOT’s Horning still didn’t budge. To her defense, she isn’t the ultimate decision maker (and she’s only been working there for three months). At the end of what was a long and sometimes heated discussion, Horning pleaded for supportive comments, saying that ODOT slips easily into defensive mode when activists get riled up about a project. “We need some positive energy,” she said.

I hope that gives you a sense of what Wonk Night is all about. If you were there, please add your thoughts if you’d like. Thanks to everyone who came, and special thanks to Omission Beer for supplying the drinks. Stay tuned for an announcement of next month’s Wonk Night!

I’m sorry I missed it, it Looks like a great event! I look forward to the next.

“We’re still finding our way with Wonk Night; but I feel like something special is beginning to emerge from these last two events.”

This is well-stated, and I’m glad to hear I’m not the only one who came away from last night feeling this way. I’m so impressed by the broad range of interests and the knowledge of the folks who are showing up. It really makes for some great discussion, and I’ve been coming away from these events motivated and energized.

Nice to hear that downtown might actually get some improvements, even if there are still some potential hurdles.

If I wasn’t so busy w/school, I’d go… Then again, if I wasn’t in school, I’d probably be trying to arrange my passport, tickets, and any visas necessary to get started working again.