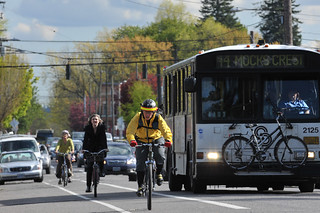 Will we finally see changes on Williams?
(Photo © J. Maus/BikePortland)

Two important Portland projects are vying for funding through a grant process being led by the Oregon Department of Transportation (ODOT) and the deadline to offer your feedback is this Thursday, January 31st.

Of the seven projects in the running from Portland and Washington County, I think two deserve a closer look.

PBOT has requested $1.47 million to fund their North Williams Traffic Safety and Operations Project. This is the infamous Williams project that had humble beginnings over two years ago, but then took many unexpected twists and turns. What started out as a straightforward bikeway project with a budget to do only pavement markings and signage has morphed turned into a full-blown capital project that will include new traffic signals, curb extensions, and even the creation of a neighborhood greenway on nearby NE Rodney.

Specifically, the project will include a complete re-striping of Williams from Weidler to Killingsworth. The main elements will include: a left-side buffered bikeway, 11 curb extensions at eight different intersections; a new signal at N. Cook St; sharrows, signage, and speed bumps on NE Rodney; and a major piece of public art that will, “honor N Williams Avenue’s importance in local African-American history.”

The other project on the list that caught my eye was a proposal to prep the northernmost segment (also known as segment 1) of the North Portland Greenway Trail for construction. Portland Parks & Recreation and Metro are asking ODOT for $799,000 to do full engineering on four miles of this project from Kelley Point Park to Chimney Park (a separate grant application has been made to do the actual construction). As we’ve been covering lately, there are some major quibbles with the route being proposed by the Parks Bureau for this project; but they are mostly in the southern sections (segments 4 and 5 to be exact). Segment 1 is almost entirely on multi-use paths and would be an importation connection and addition to the 40-Mile Loop.

There are 53 projects from around the state vying for just $8.5 million in grants. Public support for projects can go a long way in making them a reality. You have until this Thursday, January 31st to offer feedback on these grant applications via ODOT’s online survey.

Hey, ever more important Washington County has got some great projects too! The downtown Beaverton Crescent Trail connection is a game changer located in WashCo’s transportation hub!

I can’t really get behind this Williams project. Too expensive for too little extra good. For such a complicated and untried design we should let Alta try it out in some other city on someone else’s dime.

Instead I’d encourage people to throw their voice behind the Crescent Trail connection in Beaverton. It fills in some of the final gaps and has more potential to making biking easier/safer for more people to access the busiest public transit station the metro area. More upside and a better use of money than the Williams project.

are
Reply to  Chris I

if the oregonian jumped on it, i suppose their angle would be that a 100k art project is an empty symbolic gesture, while the neighborhood continues to gentrify.

Traffic medians are gradual and are marked by signs; curb extensions, not so much.

Anyone peacefully biking on the right side of the road where there and nobody is parked along that street, that pinch in the roadway just might catch you by surprise, especially after dark.

I very much hope that all of these extensions get paint and/or reflector treatments before someone gets hurt.

I’m not sure what to think about the N. Williams projects, but a new signal at N. Cook would go a long way towards making my neighborhood so much better.

Steve B
Reply to  daisy

I think Williams would be great corridor to create a BOd (Bike Oriented Development) project funded in part by an LID. Start with New Seasons, Emanuel Hospital, the Rose Garden and PCC as anchors and key investors. Its how the first Streecar line was paid for and could be a strong demonstration project for growing the bike network.

Has anyone else felt recently that coming up Williams, it seems like you hit every red? This didn’t used to happen. Conversely, I hit every green going down Vancouver. Why did they change the timing?

And SE Division is still a crossing of death. sigh.

Wasn’t N. Williams a funded safety project? Seems like the City spent so much time on planning and public hand holding that they ran out of money for what should’ve been a simple solution – reduce the street to one auto lane. Seems to happen a lot these days..

williams was the lowest priority for me on that list. it was striped with an extra-wide bike lane a few years ago and the design of the new facility is hardly any improvement at all.

all of you williams boosters should try riding your bikes to the parkrose and argay neighborhoods. i think you will be surprised to see all of the groovy bike infrastructure your ex-neighbors have. spending more money on gentrified inner pdx when other neighborhoods lack the most basic amenities sticks in my craw in a big way.

Definitely Spare. I’ve been saying that on this site for a couple of years, and always get yelled at. There are so many places in this city where there are NO facilities for cyclists and/or pedestrians.

I’d like to see either Vancouver or Williams become a bike and bus only street, and then make the other a two way automobile street. I have to think that given the trends in the price of gas, the rise of bike riding, etc, that this will eventually have to happen.

Wow. This idea is super-brilliant. What is the real or perceived downside of this?

This was proposed by others (and echoed by me) on the SAC – the City claimed it didn’t have the money. Now they’re asking for 5x the budget. is the opportunity lost?

I could see where a proposal like this might meet some resistance from drivers and businesses, but on N. Williams I have to think the cyclist are a significant support for local businesses.

Also the Oregon.gov design guide states that “A complete street accommodates all travel modes…” but why should individual streets be expected to be all things to all people, especially when this is clearly not the case with so many other streets. I think the overall system can accommodate all modes of transportation, but it seems shortsighted to expect that out of every street.

Allan mentioned that this was already proposed, I’d like to hear more about that.

The PBOT/ODOT Barbur Blvd. project (#111) includes filling one of the scary gaps in the bike lane, but you have to scroll through to the middle of the document to the project description/solution for the details. “Fill bike lane gaps inbound from 24th Ave to 22nd Ave/Spring Garden Rd, as well as, if feasible, the
outbound gap from SW 24th Ave and SW Spring Garden. Otherwise, existing bike lanes will be maintained.
– Build retaining wall to hold up steep slope between SW 24th Ave and Spring Garden, to accommodate
missing bike lane and sidewalk.” “The focus is on improving safety for both pedestrians and cyclists, providing good
access to transit, reducing the double barrier effect of crossing SW Barbur Blvd and the I-5 Freeway,
improving pedestrian and bicycling connectivity and access for users of all ages and abilities and enhancing
the walking and biking environment.”

For those of us who live in and travel through SW Portland on bike or foot, this is a very important project that deserves your support.

and a major piece of public art that will, “honor N Williams Avenue’s importance in local African-American history”
What about the history of N Williams that is not black? What about the history of the people that homesteaded the property originally? That is what I find interesting, some pictures of steam trains crossing williams at Killingsworth, horses and wagons, old time bycycles… Yes include black heritage, but tell the rest of the story too