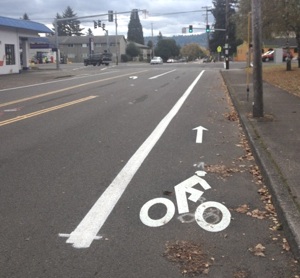 I love receiving dispatches about bike stuff from readers in parts of town that I don’t often get to myself. I rely on your eyes and ears to help me cover more than just the central city.

Case in point is reader Gretchin Lair. She noticed some lane re-striping and a new bike lane on an intersection she frequents in outer southeast Portland so she snapped a few photos and shared her thoughts.

Take it away Gretchin:

This intersection used to be all one lane and it was a bit of a traffic game. Cars would try to squeeze in two lanes based on what they thought would happen next. Drivers who wanted to go straight or turn right would zip around the main lane of cars and gun it when the light turned green. Most of the time those drivers would guess correctly and they would route around the cars turning left, who were stuck waiting for oncoming traffic to pass. But sometimes drivers would guess wrong, and it would be an ugly merging situation. Every new light was a new guessing game.

I’ve both driven and biked this road. While I certainly would prefer it if 112th had a bike lane all the way along its length, I really appreciate the way this reduces a lot of ambiguity for everyone traveling through this intersection. Thanks, PBOT!”

And here’s the view heading south on 112th after crossing over Powell. 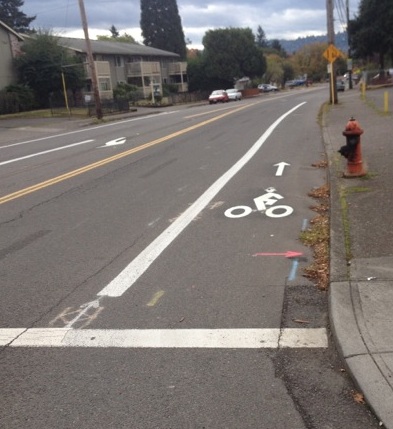 Looks like a small, but effective improvement. Thanks for sharing Gretchin.

And to everyone else out there, if you see changes to the bikeways where you ride, consider taking a few photos and sending them in.

The changes at 112th and Powell were in response to citizen comments collected during the outreach for the SE Bush Neighborhood Greenway and funded by that project.

They really need to do this on Halsey east of Hollywood.

The Buffered Bike Lanes on SW Barbur Blvd are Brilliant!

Requests for changes to the lane use control at any intersection in Portland should be sent to 823-SAFE.