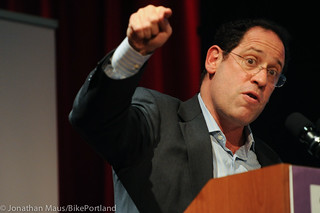 Bruce Katz of the Brookings Institution opened up day two of the NACTO Designing Cities conference with nothing short of a manifesto. The noted expert on what makes cities and metropolitan areas tick, stopped short of calling for cities to secede from the union; but he delivered a scathing indictment of what he sees as a feeble federal government and told the hundreds of city leaders and planners in attendance that, “The U.S. is witnessing a metropolitan revolution.”

“The time of waiting for the regulations and waiting for enlightened leadership from national government are over,” he proclaimed, “this has to be a revolution that can permeate the world and I think the U.S. can start it.”

Katz sees well-designed, distinctive cities where “innovation districts” flourish alongside separated bike lanes and abundant transit as the last great hope to pull America out of what he referred to as the “shock decade” where millions of jobs have been lost and a growing number of people are poor.

In 2000, Katz said 81 million Americans were considered poor or near-poor. By 2010 that number shot up to 107 million. Underscoring the role transportation plays in that “shock statistic,” Katz shared that a typical metro resident can access only 30% of the jobs in their metro area by public transit in 90 minutes.

Katz believes that a key to solving these problems is reforming our transportation networks and re-making our cities so they produce, “More jobs, better jobs, and accessible jobs.”

Typically, help with this task would come from the federal government, but due to our non-functional Congress and partisan atmosphere in D.C., he says, there’s no sense in waiting for help from above. Things have gotten so bad in D.C., Katz said, “If anything intelligent comes out of Washington, it’s almost like an accident.”

“Change is going to have to come from below. From cities.”

Katz wants to see a different type of U.S. economy emerge. One that isn’t like the failed “consumption economy” that was focused on building homes and big box retail shopping centers that “celebrate the uniform.” He wants to see manufacturing return to America, and with it, more companies that export products overseas. He said each city must find what makes it distinctive and use that as a competitive advantage. This new type of economy, he said, “Craves proximity” because when people and innovative ideas and companies are close to each other, it leads to a “synergistic mash-up” necessary for success.

He called these areas where proximity breeds synergy, “innovation districts.” What industrial centers did in the 1920s and 30s and “suburban science parks” did in previous decades, Katz believes innovation districts will define the successful cities of the future.

“If we’re smart we will recognize that the next economy and the next wave of demographic shifts make us dramatically re-think place-making.”

Where does transportation fit in? “Sustainable transport is at the heart of this thing,” he said, “transit has created a platform for a radical re-population and re-densification of our urban cores.”

“If you don’t have transit,” he proclaimed, “you are not a 21st century metropolis.”

When asked during the Q & A what role bicycling plays in cities of the future, Katz said bicycling is essential on many different levels. He said the biggest fiscal threat America faces are the “overextended Medicare and Medicaid budgets” and that the more people bike the healthier they become (a recent trip to Copenhagen helped him see the importance of bicycling first-hand). Katz also said that cities where a vibrant bike culture flourishes will be compete better for talented workers, creators, and thinkers.

Transportation planners are, in Katz’s eyes, the “vanguard of remaking America and giving us the platform to be more economically competitive and socially inclusive.”

Katz’s words solidified a major theme of this conference: That urban transportation planning should go way beyond simply thinking about moving people, cars, bikes, and buses; and that a city’s streets are just as important a measure of success as the businesses that spring up around them.

“Sustainable transport is at the heart of this thing,” he said, “transit has created a platform for a radical re-population and re-densification of our urban cores.”

Does he mean transit in the sense of mass transit? Or more broadly transport including human powered modes. I hope the latter, because bus and lightrail and streetcar are terribly inflexible compared to walking and bicycling. At some point we need to concede the (inherent) limits to mass transit when it comes to replacing drive-alone trips. Biking and walking offer comparable flexibility at very low cost; bus and MAX do not.

I hear you 9watts,

I think the word “transit,” for people like Katz (who aren’t enmeshed in the transpo wonkery world), sometimes is used as a general term for everything that’s not the traditional highways/freeways/car approach. Put another way, I think “transit” sometimes becomes synonymous with active transportation and all non-car modes.

thanks for the clarification.
On this topic I can’t recommend highly enough the books Greening of Urban Transport: Planning for walking and cycling in Western cities and the successor volume Sustainable Transport, both by Rodney Tolley.

He is revolting against wearing a tie at speaking engagements.

Viva la revolución. It’s funny, a place where people, ideas, and companies are in close proximity to each other, is called a city. Cities were invented for just that reason — to be close to, collaborate with, or trade with, other humans. So this is a fitting theme for the Designing CITIES conference, but it’s odd that you even have to remind silly sprawled-out, mortgaged-up America that they exist, and why they exist.

I want to see video!

I concur…I have long hoped for a new geopolitical unit in the US…the “City-State” which is independent of our state legislatures in all things local, much like the States have autonomy to the Federal level in some areas. Talk about local control…why must Albany (NY state legislature) control and dictate mass transit policy and bridge tolling in NYC? It makes little sense.(It is money collected by the State and then redistributed back to the Local government units…this works well as long as the proportion kept is not too great AND as long as the administrative policies are not too counter to the local operation situation.

Though i know that this city vs. country push pull has long been a part of the US politics…Jeffersonians vs. Federalists, etc.