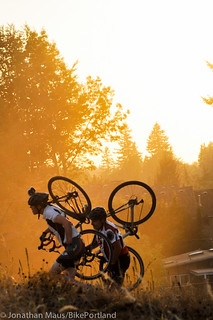 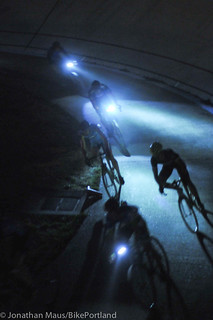 Portlanders will squeeze in a bike race whenever they can.
(Photos © J. Maus/BikePortland)

If you still need convincing that Portland is the epicenter of America’s cyclocross boom, consider this: Over 550 people showed up to race their bikes at the second week of the Blind Date at the Dairy series in Portland last night. On a weeknight. After work. And for some of the racers, after dark.

That’s a lot of people.

Brad Ross, the man who puts on the Cross Crusade (the granddaddy of all ‘cross series’) was out there last night. He noted there were as many people racing as the Crusade race at Alpenrose just six years ago. “I’m psyched that it is getting to be so popular,” he told me today, “It used to be that there was only the Cross Crusade. Now there is the Blind Date, the GPTB [Gran Prix Tina Brubaker] series, and numerous clinics for people to choose from and they are all thriving.”

After I heard that 432 people showed up to the Blind Date last week, I rolled up and over the southwest hills to take a look for myself. This “little” weeknight race series started just three years ago. In fact, I was at the debut event in 2009 when a mere 271 people showed up to race. My how things have changed. 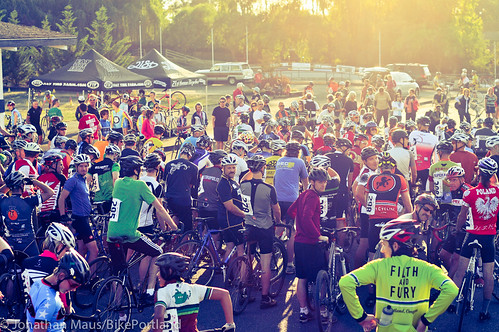 I was amazed not just at the number of racers last night; but who those racers were. Over one-fifth of the racers (115) were women, there were kids on bikes everywhere I looked, lots of families, and lots of beginners. The men’s masters C field was huge at 121 participants! 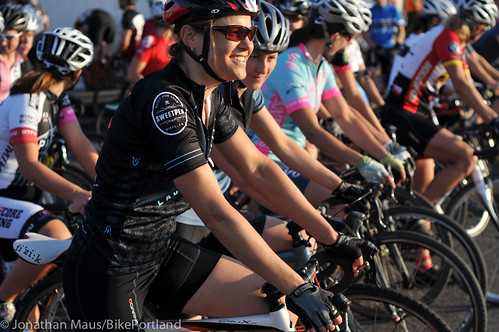 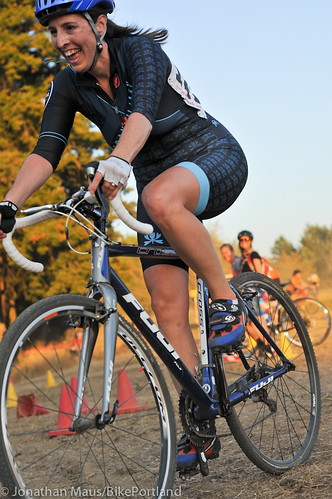 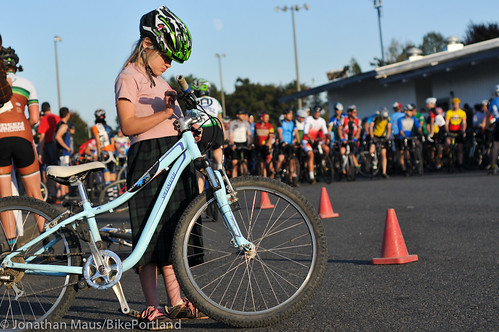 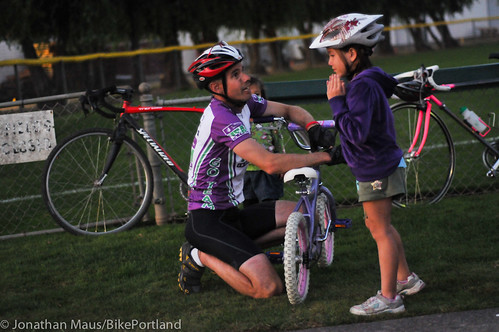 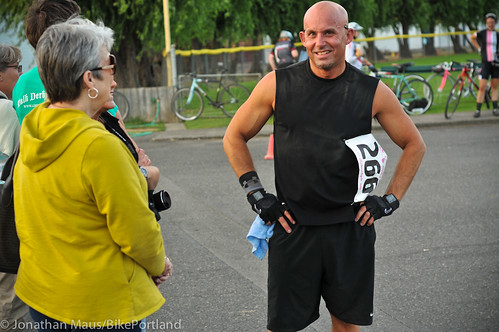 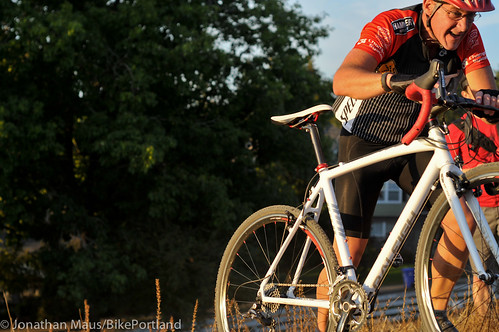 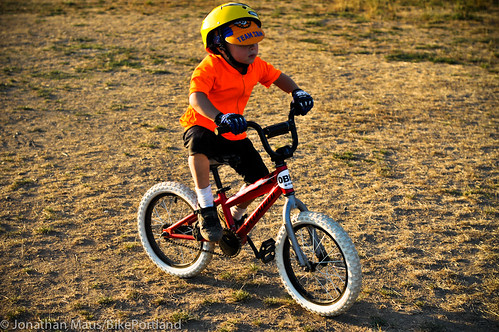 What’s the big attraction? Series founders Joe Field and Tony Kic have done a great job of creating a welcoming, fun, and accessible environment. There’s a kiddie race, a food cart, a bike shop on-hand to help with repairs, great prizes for all the winners, and so on. Byt beyond all that, Portland is just crazy for cyclocross, the weather has been fantastic, and Alpenrose is easy to get to. 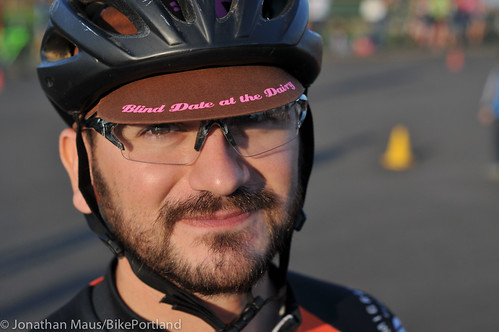 Portland artist Tomas Quinones, a proud member of Team Slow, told me he uses the race as therapy. “I’m going through a lot of stress right now, and this helps me vent some frustration. The high-intensity helps me get super-focused.” Quinones added that he got third from last place last week. But, as a proud member of Team Slow, it didn’t bother him at all: “We’re the penultimate name in bike racing,” he said, reciting the team’s slogan. 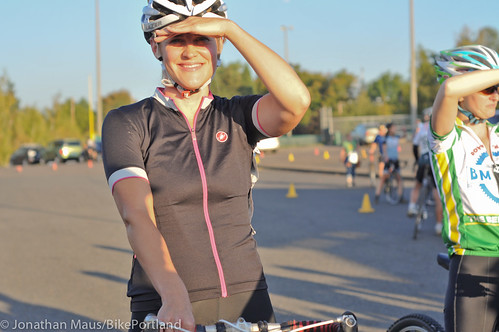 35-year-old Jessica Gill raced in the beginner women’s field. Her first ever ‘cross race was last week at the Blind Date series opener. Looking up at the huge crowd of racers waiting on the starting line in front of her, she said, “I thought this series would be a lot less intimidating [than the much larger Cross Crusade]; but it’s still a good race.” 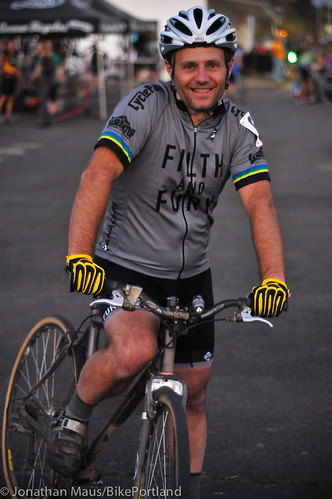 When the Blind Date gets really interesting is when the sun sets and the race course goes dark. The elite and experienced racers start later in the evening, so the lack of visibility adds a technical challenge to the event. Some riders use bright lights on their bikes, but the majority rely on flood lights scattered around the course. “You go in some areas and it’s totally blind,” said one guy before his race. Racer Paolo Dabbeni said with a smile, “I think the race organizers take the name too literally.” 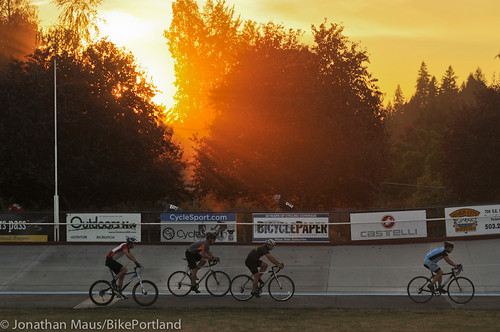 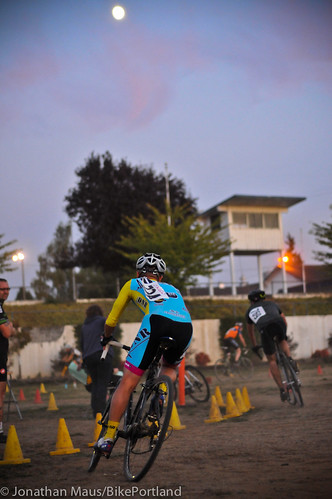 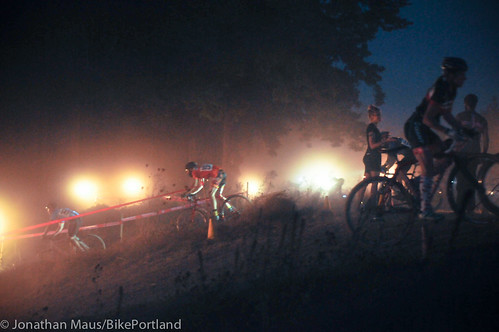 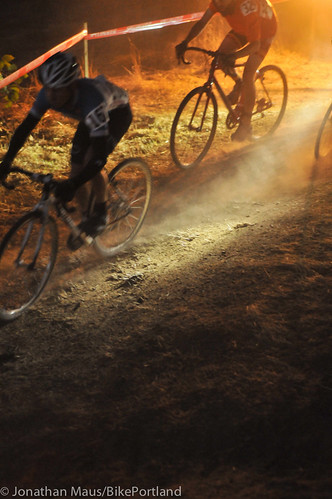 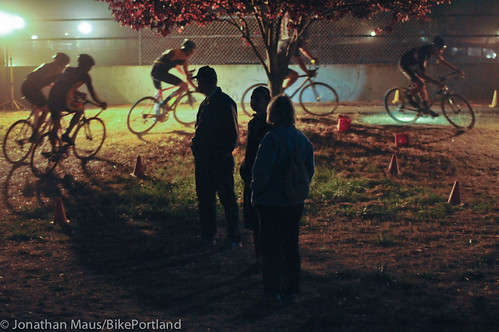 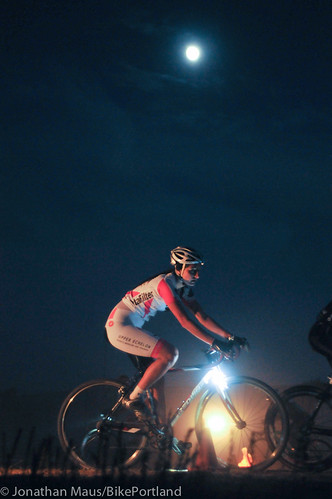 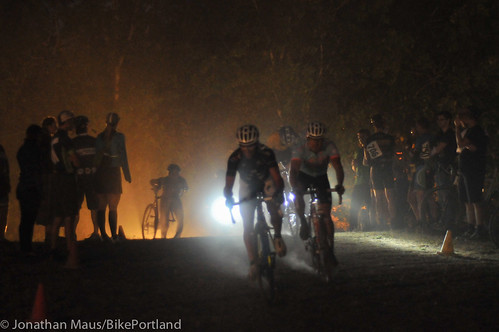 Out on the course, as the moon takes over from the sun, the racing continues well into nightfall. It might be hard to see the path ahead out there on a bike; but the future of cyclocross in Portland is in plain sight.

— Look like fun? There are four more races in this six-week series. Learn more at CrossSeries.com.

Rode my first ‘cross race ever last night at this very series. Tons of fun! Also would like to take this opportunity to compliment you, Jonathan, on your photography skills. Not just these shots but your ability to capture every day cycling in and around Portland. I enjoy your pics nearly as much as your posts!

This looks like so much fun! I’m still feeling way too intimidated to give it a try, though. Maybe I need to find more folks I know who actually race ‘cross.

Daisy, it IS so much fun. I felt intimidated too, until I tried it, and then I was hooked, immediately. Come out, watch, hang out! You’ll soon see that most everyone (especially in the beginner/C fields) is super friendly. Give it a try and I guarantee you’ll be back for more!

Oh, I miss the Blind Date series! Now that I’m up here in Seattle, I can only concur wholeheartedly that Portland is the center of the ‘Cross Universe.