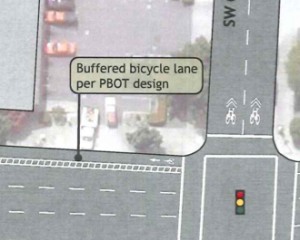 A short but crucial bikeway connection between downtown Portland and SW Barbur Blvd will get a bit nicer thanks to the Bureau of Transportation. PBOT announced today that they’ll begin a lane re-striping project that will re-allocate roadway space on SW 5th Ave and SW Sheridan in order to make room for bike lanes. 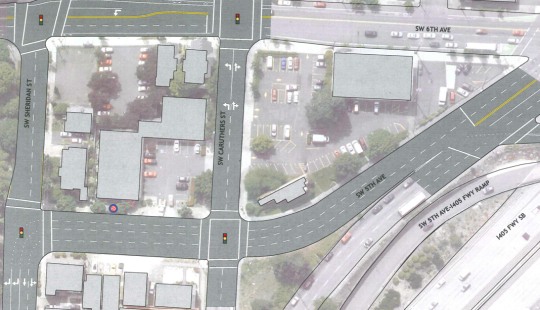 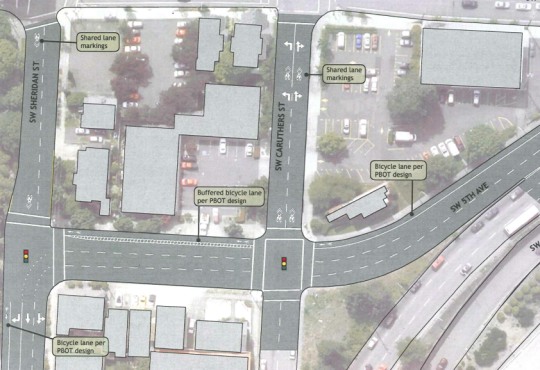 In a press release about the project, PBOT referred to the changes as necessary to “provide important bike lane connections.”

Southwest Portlander Keith Liden, a veteran citizen activist, has pressed PBOT for these changes for several years. “I think I first brought this up in 2006,” he told me on the phone today. Liden says he’s “thrilled” to finally see it happen. “It’s an important connection because we have these disconnects in this area. Now it [bikeway on SW 5th coming south from downtown] just ends and it’s sort of like, good luck getting to Barbur.”

PBOT spokesperson Cheryl Kuck says the striping components of the project will cost about $10,000 and were budgeted for several years ago through funds set aside out of the Affordable Transportation Fund created by Mayor Adams in 2009 (it was originally called the “Bicycle Infrastructure Improvement Fund”). According to Kuck, PBOT crews will also be re-paving 3.4 lane miles of SW Barbur (south of Sheridan) at the same time to the tune of $520,000.

Work on this project is set to be completed on October 17th.

I think it would set a great tone to have the buffered bike lane continue through the intersection of SW5th and SW Sheridan as a dotted line (identical to the car lines through that intersection) to reinforce that as bike space and to help bikes stay wide of the car lane as well.

that’s a horrible area for all modes… here it is right now… http://goo.gl/maps/62X5S

Does this project do anything to connect Broadway to 5th? I usually come up Broadway, and don’t like being forced to take a right on 6th and then have to cross the traffic lane to turn left on Sheridan. I end up going straight on 5th where there is no bike lane and taking the right lane as it splits off. Letting cyclists continue straight on 5th after Broadway ends seems much more logical, and only means adding a bike lane for about 100 feet.

Speaking of striping… Overnight, whoever is in charge on the Sellwood Bridge project had the West exit re-striped to include a bike lane that begins right at the curb-cut on the sidewalk and follows the curve of the road to loop under the bridge and head South. Yay! It’s very nice and welcome. However, it may be due to an upcoming closure of the ramp/stair/path option that leads riders South to the cemetery entrance intersection.

Jonathan, I encourage you to to check out the area sometime for pics of riders or an update on conditions and plans for bike transportation during the construction. Despite the conditions, many riders still use both the road and the sidewalk.

One thing the map leaves me curious about is how the new markings will deal with cars headed up 6th toward Terwilliger Blvd. Perhaps the bike lane will move to the left of that right turn for those cars, but with the current markings, that’s a pretty steady flow of cars turning right that a bike coming from the Broadway 405 overpass would have to cross.

For the amount of space and what appears to be a non-existant demand for parking, this is an incredibly timid design, which maintains wide driving lanes, which encourage fast speeds. You could easily buffer or provide protection for the bike lane north of Caruthers. This is important since drivers tend to veer into the bike lane on turns. All you’d need are some flexible posts. South of Caruthers, you could pretty easily expand the buffer and/or provide protection with flexible posts.

Yes, this is better than what came before, but it could have been much much better without much additional effort.

Absolutely what I was thinking! Except you have much more detailed ideas. The PBOT proposal is a step in the right direction but it won’t convince the interested but concerned to come anywhere close

Wow if so what an opportunity to help make this section of road safer.

I know this is not related to the article, but what an amazing opportunity, I hope we don’t blow it.

The city to-date has implemented very few of the recommendations in the Barbur Streetscape Plan (http://swni.org/page/2009/apr/4451), which has been out there since 1999. They’ve been effectively ignoring it for 13 years, so I wouldn’t hold my breath for significant safety improvements anytime soon.

I agree that those bridges need widening.

But, I’m not exactly sure where 3.4 miles on Barbur southbound, starting at Sheridan, ends. There are mileposts on Barbur. Milepost 3 on is before the Capitol Highway off-ramp that takes you up the hill to Wilson High School. That is still north of the bridge pinch-points. So, I suspect that the repaving will not get as far south as the bridge pinch-points. And, unfortunately, repaving won’t do anything to actually widen those bridges.

Its about time. I used to commute this way every day down Barbur from NW about a decade back. It should help a little in the area, although I always just took the lane.

Oh horrors! That $10,000 would have been put to much better use filling potholes. Does Beth Slovic know about this? Another example of bikes taking priority over our crumbling roads. Won’t somebody please think of the children!!??!

Seriously, I don’t ride in that area very often, but it seems like a good improvement.

10k out of 520k? So… 0.2% for bikes? Why did we get a Platinum rating, again?
Actually, I’m impressed that they can repave almost 1 miles of 4-lane road (or is it a little over a mile of 3-lane road?) for 1/2 million. I thought the cost of repaving had gone up to 1 million per mile, looking at other projects. Perhaps this is just laying new asphalt on top, rather than totally resurfacing the road as in the more expensive projects?

I ride through here frequently at rush hour dropping out of the hills. For me, vehicular cycling is the only way to get further west. Paint on the road in this intersection will likely get more inexperienced riders in a dangerous situation. A truly buffered lane is necessary Bikes dont belong next to 3 lanes of pseudo highway speed traffic. It negligent policy. Only the diehard car commuters know how to drive through this segment of the city. Its no place for timid cyclists and paint will only promote more people into this poorly designed road. Its just as bad as “#$%#ing Sandy & Burnside”.

Agree. Especially as a big percentage of vehicles, including the #8 bus, turn right at Caruthers and there’s a sometimes-busy bus stop halfway through the next block, between Caruthers and Sheridan. A lot of vehicles will be crossing/moving in and out of that little bike lane.

Portland is insane to keep all these on-and off-ramps! They use them on bridges, getting off I-5 and I-405, and they only encourage or support driving like one is still on the freeway. These roads should be normalized to the city grid as soon as possible. I would love to see the slip lanes on Broadway, 6th and 5th removed, the Broadway crossing could meet perpendicular on the south side with an all-way stop or signal, etc. It is similar at the bridgeheads, these off-ramps and slip lanes should should get removed and open the land the redevelopment or park space!

Its nice to see the sharrows. I personally would like to see all of downtown become one big sharrow zone.

I’m wondering that if PBOT is going ahead with these “buffered” bike lanes, why not install some sort of actual, physical buffer besides paint. Is there a reason? Bollards either get knocked down or cost a ton of money or something?
We were driving(an automobile) on NW 16th yesterday, under the freeway, and discovered the bike lane there also has a new “buffer”, essentially another stripe of paint next to the bike lane. The gentleman in the SUV in front of us-talking on his phone no less- was straddling this new “buffer”.

Putting a physical barrier on SW 5th between Sheridan and Carruthers would be difficult, because there’s a TriMet stop on the right side of the street there. The buses still need to be able to pull across the proposed bike lane up to the curb.

A problem with the proposal that I noticed was the bike lane on SW Sheridan, east of 5th. Note that it’s to the curb-side of a right turn only lane. A vehicular cyclist wanting to go straight on Sheridan would have to cross over that right turn lane. I’ve gone straight there once or twice, since my office is down that way. Yes, it’s two lanes with no bike lane. But at least eastbound it’s mostly downhill and easier to keep up with traffic.

I hope the northbound Barbur to Front Viaduct to Front Avenue is going to get striped soon. I know there’s lots of work on the new bridge happening, but it’s always been messy for bike commuters, and even worse during the construction now.

“Work on this project is set to be completed on October 17th.”

As far as I know this hasn’t even started yet.
What happened?