[BikePortland contributor Will Vanlue is on the Cycle Oregon ride this week. This is his latest dispatch.] 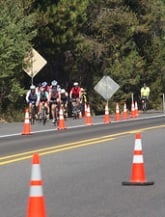 Cycle Oregon’s mission of helping the economies of Oregon’s rural communities keeps the route, for the most part, on quiet back roads with little motor vehicle traffic. However, there are occasions when there is only one road leading between communities giving people no other choice than to share the road with a large volume of motor vehicles.

There was one such situation this year when the route turned on to Highway 97, a major north-south corridor between Oregon and California, which regularly has traffic traveling in excess of 65 MPH.

Normally it’s a harrowing stretch to ride on a bicycle but for a few hours during the ride the Oregon Department of Transportation and the Oregon State Police were able to turn it into a safe, pleasant, and -by some estimations- fun place for people to travel on bicycles. 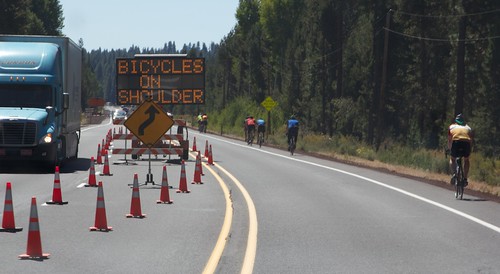 ODOT helped the over 2200 people riding bicycles by temporarily reducing the posted speed limit on a 20-mile stretch of Highway 97 from 55 MPH to 40 MPH. To complement the speed reduction, OSP posted officers along the route to strictly enforce the temporary speed limit.

The reduced speed limit was well marked both with standard and electronic speed signs. 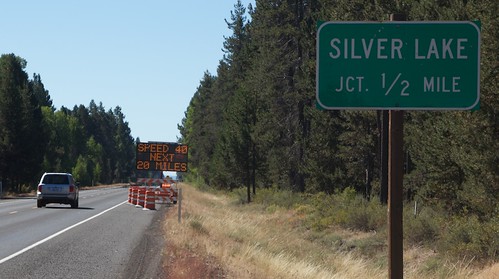 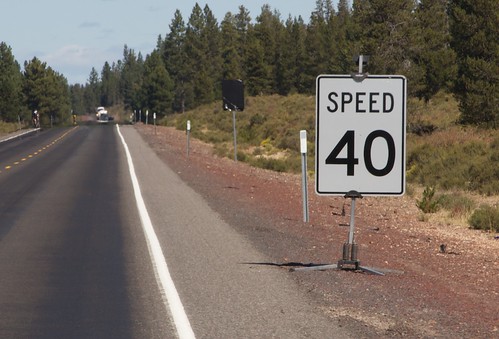 Still, one officer I spoke with estimated that State Police, along with the officers from the Milwaukie Police Department who travel with Cycle Oregon for the entire 7-day ride, pulled over roughly 150 people driving over the speed limit in the 5 hours the temporary reduction was in place.

Most people who were pulled over received warnings but the effect was the same as if they had all been written tickets: people driving slowed down when they saw the speed limit was being strictly enforced.

ODOT took another step towards creating a safe place for people to ride bicycles by dividing one section of highway into three, nearly equal, sections: two for bi-directional motor vehicle traffic and one for people riding downhill on bicycles. 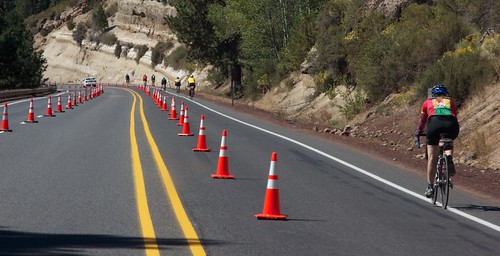 The shoulder in that section is not ample and would have been hazardous to ride had there been people passing in motor vehicles just inches from Cycle Oregon participants.

This temporary lane configuration reminded me of how Multnomah Blvd was divided up during Sunday Parkways. It’s a similar example of how we can reconfigure existing road space to safely accommodate a broader range of traffic.

As you can imagine, the reaction from people I spoke with was unanimously positive. People riding bicycles felt safe and protected while sharing the road. What you might not guess is that it wasn’t just people participating in Cycle Oregon who praised these changes.

Steve Schulz, Cycle Oregon’s Assistant Director, said he was aware of people driving motor vehicles who thanked ODOT and Cycle Oregon for the temporary improvements to traffic control devices along the highway.

People in cars appreciated the clear indication of where people riding bikes were going to be, which eliminated the guesswork of sharing a lane with vehicles traveling at vastly different speeds. Also, they indicated people riding bikes, having their own dedicated space on the road, were behaving more predictably. 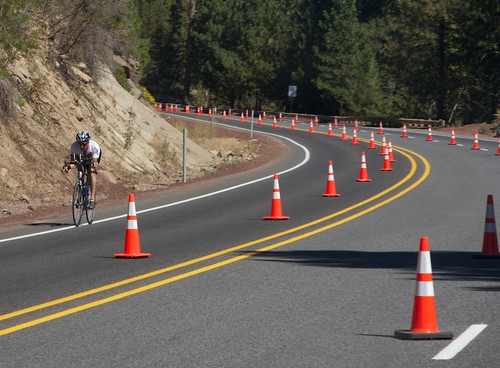 As Jonathan pointed out recently, ODOT knows what it takes to keep people safe. It was great to see them, with the help of OSP and the Milwaukie Police Department, put their knowledge and skills into action and give people a space to safely enjoy Oregon’s scenic roads.

So wonderful to hear how Cycle Oregon is getting the help of ODOT and State Police on these high traffic/high speed routes! It seems like it will go a long way toward community understanding of how passing distance and speed play a crucial part in bike/car coexistence.

This is another fine example from ODOT for their committment to keeping CO safe. CO’s I’ve done in the past have included stretches on I-5 that were similarly patrolled and marked off by cones. Thank you, ODOT, for showcasing a committment to the safety of all modes of travel.

As an avid cyclist, it was my pleasure to help out fellow cyclists and CO in making this event safer for its participants! I am thankful for BikePortland.org and their kind words and great reporting. I also want to give a special shout out to the folks in ODOT Region 4 who helped set up all the extra signs and devices and really create a safe environment for all the road users! Cheers

Of course the officers were able to pull over so many vehicles in such a short time. The lowered speed signs for south-bound traffic were posted just north of the Silver Lake road where the cyclists (and a lot of trucks and other traffic, myself included) turned onto Hwy 97. Not seeing any speed sign for another 10+ miles was quite discouraging. Thank goodness they were only doing warnings and not actual tickets. Hard to drive the “speed limit” when you truly do not know it has been lowered.

Does anyone know the status of the cyclist who hit the cone at the bottom of the hill in this section? The rumor was he had a broken collar bone and broken hip.