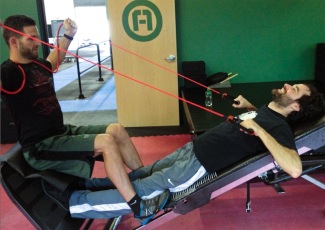 Mat Barton working out at a
training center at Beaverton.
(Photos: Mat Barton)

Nearly two months since a freak crash in a local bike race left him paralyzed from the chest down, southeast Portland resident Mat Barton is pushing his body through physical therapy and coming to grips with his new way of life.

Mat is a married, 31-year-old graphic designer who works in the bike industry and for whom bicycling was an all-consuming passion (to an almost “unhealthy” extent he says). His crash and the severity of his injury has spurred widespread community support and the creation of the Mat Barton Recovery Fund. I recently heard from Mat about how his recovery is coming along and how he’s handling things.


“My favorite place to ride was Forest Park, and that’s pretty much off limits for a hand cycle. Hopefully that will change as I get stronger.”

Mat loves cyclocross. It was his favorite discipline. As I searched for images to use in my stories about his crash back in June, I came across photos that showed him flying through the air, running over barriers — and usually, smiling. For Mat, the onset of ‘cross season is especially hard.

“Right now I’m really missing not being able to bike. I spent the morning looking at photos from yesterday’s David Douglas race. I loved this course and seeing these pictures bum me out, but I can’t help but look at the photos. I’m actually looking forward to winter, when there’s less bike commuters, no races and shitty weather.”

Mat and his wife Jessica live in the Ladd’s addition, so when he rolls around the neighborhood in his wheelchair, as all the bike commuters ride by, he says he thinks to himself, “You don’t know how lucky you are.” 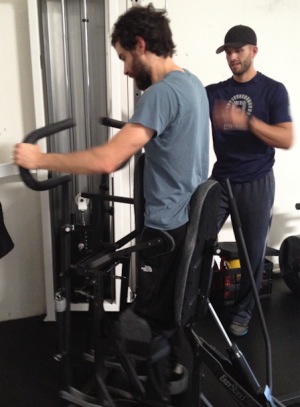 To help fill the cycling void in his life today, Mat has tried handcycling out at Portland International Raceway (which, incidentally, is where his crash happened). “That felt good,” he says, and he says he’ll probably purchase a handcycle soon. “But it’s not the same.”

“My favorite place to ride was Forest Park, and that’s pretty much off limits for a hand cycle,” he added, “The steering sucks and climbing is very difficult. Hopefully that will change as I get stronger.”

And he is getting stronger. Thanks do all the financial support he’s gotten from the community, Mat is doing physical therapy and training at ADAPT Training in Beaverton. “This place is awesome,” he shared. ADAPT doesn’t accept insurance, so Mat knows that if it wasn’t for all the support he’s received, he wouldn’t be there. “I just want people to know how thankful I am for that.”

Progress and adapting to a new way of life won’t be easy and won’t come quickly; but Mat says things are progressing, “As well as they can… I’m getting more comfortable with my new situation.”

He’s also smiling again and getting stronger every day.

The community continues to help Mat on the road recovery. His employer (Western Bikeworks) and friends are organizing a big fundraising event on September 28th at The Lumberyard indoor bike park. The event begins at 5:00 pm. There will be a silent auction, free beer, a huge prize raffle (drawings held 8:30 to 9:30), and half-off admission to The Lumberyard (regular price is $24.95 a day). You can purchase raffle tickets for Focus TT bike at Western Bikeworks (1015 NW 17th). Full event info here.

Hang in there Mat! You will be bombing down hills in an off-road chair in no time.

My family and I have been thinking of you and sending you postive thoughts. P.S. I need to bring you over another McIsley.

Thanks for the update Jonathan! Keep it up Mat!

Thanks everyone! Matt Forness, thanks so much for the McIsley! I still tell people the story about running into outside rehab.

Mat,
You are redefining the term badass daily.
Keep at it and show the rest of us how it’s done.
M.

MAT, keep up the good, hard work man, you rock!

I’ll be there. It’ll be a day after my birthday, and a day I might piss off everyone who knows me by taking out my new dirt jumper (hee hee) and riding it a little – maybe my first ride since breaking my collarbone in August.

Here’s to comebacks! Soooooo happy to see Mat at ADAPT Advanced, and surrounded by such a generous community. For anyone else out there who has known or worked with people with spinal cord injuries, this video of people at work at ADAPT will make your day/rearrange your head:

It CAN be done.