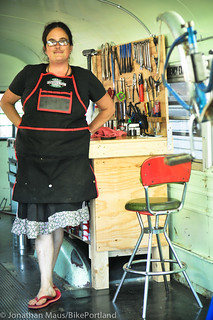 Sherifa Roach, inside an old school bus,
which is home to her new bike repair shop.
(Photo © J. Maus/BikePortland)

I’d heard from a few sources that someone was operating a bike shop out of an old school bus, so I swung by yesterday for a closer look. Sure enough, there was Sherifa, giving away bags of popcorn as part of the RAD event, and smiling in her apron in front of a big purple bus parked in the alleyway behind her. She was proud to give me a tour of the inside (which I found surprisingly roomy).

Sherifa pointed out how her partner had completely remodeled the inside of the bus. He wired it up with new electrical outlets, built wooden work benches, installed new lighting, added some security bars for the windows, and built a ramp off the rear door so people can roll their bikes right on up. 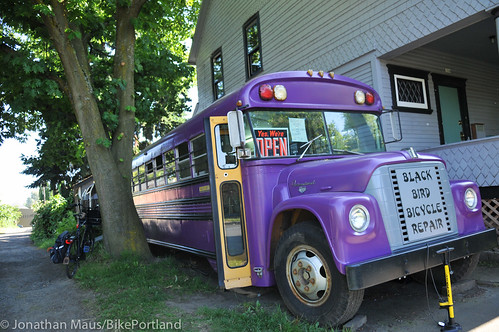 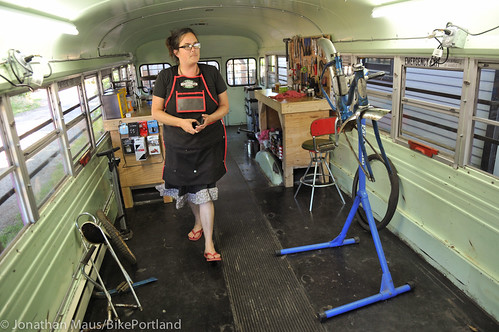 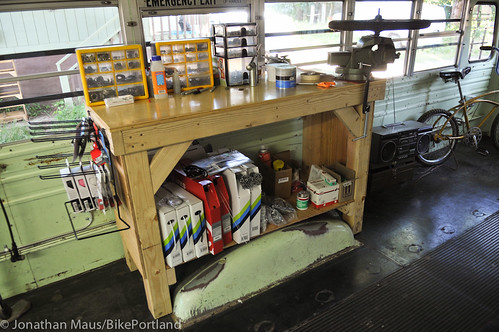 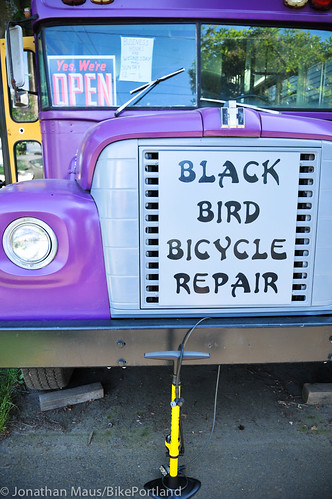 Sherifa says she started riding a lot when she stopped driving cars due to a medical condition back in 2005. Soon after that, she began tinkering on bikes in her basement and has spent the last seven years teaching herself how to fix them. Then, when she got pregnant three years ago, she wanted to get out of the basement (due to concerns about poor air circulation), so she started volunteering at local shops. Sherifa has spent three years as a volunteer instructor at the Women and Trans Bike Night at North Portland Bikeworks (every Thursday from 6-8:00 pm) and she’s also a regular at Bike Farm, a non-profit bike repair collective on N Wygant near MLK Blvd. 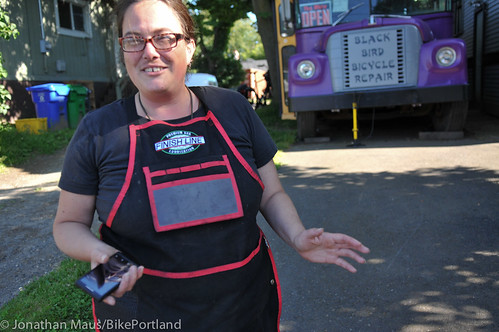 At Black Bird, Sherifa plans to focus on repairs and maintenance. She said she has a soft spot for 1970s-era department store bikes. “I love ’em,” she said, rattling off model names like Santa Fe, Western Flyer, and various Murrays. Given that predilection for classics and her work at local non-profit bike shops, she went to UBI to brush up her skills. “It [UBI] was awesome, it polished me up a bit and filled in some gaps in my knowledge. It especially brought me up to snuff on newer bikes and the expectations of their owners. Which is a little different than the non-profit volunteer stuff I’ve done.”

Black Bird has only been open for two weeks. Hours are Wednesday through Saturday from noon to 6:00 pm. If the front seat of the bus is taken, you can always walk across the street to the Lompoc Fifth Quadrant brewery or Ristretto Roasters across the street for a drink while you wait.

I didn’t realize she was part of RAD yesterday and thought she was some random lady selling peanuts at a street-side table off Williams. I don’t think most commuters would have known she was there, and I only saw her as I was doubling back for another otter pop.

Way to go Sherifa! I hope you have much success! Jonathan – thanks for the Bike Farm plug 🙂

“Too much….the Magic Bus!”
The Who

I spy with my little eye a Schwinn Stingray,,,cool

I love it so much I’m tempted to break my bike just so I can get it repaired there.

That’s genius I tell ya. Being mobile is a plus too… she can set up near a big bike event for example, or (perish the thought) go to other towns.

Even more genius is a business that doesn’t have to pay property tax on their building. Way to go.

I’m going to stop by for an Electric Acid Kool Aid tune up. God’s speed to you Sherifa!!

Wow! Crazy oldschool, I love that bus! Reminds me of the “Magic Bus” from Into the Wild 🙂

great, best of luck sherifa! i’ll have to stop by for a tune-up soon.
are you mobile?

So excited that the shop is open! As the author mentioned, the bus is surprisingly roomy – way more spacious than you would imagine. Support Black Bird Bicycle Repair!

Very creative! It is also a good way of recycling what would otherwise be a rotting, neglected old school bus. I love it’s purple color and its spacious interior too.

I am quite sure that bikers like me would have a good reason to make a trip to that unique repair shop just to say that they have visited it. Thanks for sharing about this! It adds fun to the time of having your bike repaired.

Way to go Sherifa! Your bus rocks and I know you have a passion for working on bikes. I wish you much success and happiness!

Great job Sherifa! This is an awesome idea, and I know you will be my first stop next time I need work on my bike! Good luck!