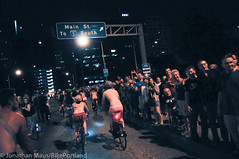 This guest post is by Michael Andersen of Portland Afoot, PDX’s 10-minute newsmagazine about buses, bikes and; low car life.

Summertime might not have quite reached the sky yet, but it’s sprouted in Portlanders’ hearts. I’ve got evidence.

Now and then, Portland Afoot publishes a feature we call “Craigsbest” – a selection of the weirdest and wonderfullest transit-related missed connections of the month, as posted on portland.craigslist.org. It’s a delicious, frequently hilarious little window into Portlanders’ inner lives.

A few months ago, I decided to try tracking bike-related connections, too. Unlike public transit, it turns out, bike-based flirting in Portland is extremely seasonal – and June seems to be harvest time. Last month, more than 50 posts mentioned bikes.

These five are the best. All posts below are reprinted as typed…

You: Creeper bike rider who slowed down, pointed at me and said, “you should be naked.”

Let’s get a drink.

(June 18) So I was slowly spinning my way up Newberry this past Saturday afternoon, wheezing like a cat hair clogged Hoover, and sweat pouring from me like Cadel Evans’ tears. Suddenly, I heard the unmistakable sound of a bicycle shifting onto the big ring. I glanced over my shoulder, saw your yellow jersey clad body just inches from my rear wheel and let out a loud, startled “Jesus!”.

As you pulled alongside, you said in a cheery tone (reminiscent of an Applebee’s employee who just got a $50 tip), that it was “a hot one today”. As you spun past, you took note of the interesting white finish of my salt encrusted black bike.

I mustered what little energy I had left, and managed to spin up alongside. You mentioned that you’d left St Johns, and preferred riding the hills on weekdays when there was little traffic. You also talked about descending a hill in Colorado at an insane speed while pulling a trailer, leaving me awestruck and and a bit intimidated at the same time.

After an all too brief conversation, we’d crested the hill, exchanged pleasantries, and you turned right on Skyline, while I went left. I’d love to meet again for another lesson in humility ride sometime. Maybe one of longer duration and lesser grades. Or at the very least, we could exchange Strava profiles.

If you should see this and are unembarrassed enough to reply, please put the brand of your bike in the subject line. The bots have taken nearly complete control of Craigslist.

Oh, and that blurted cry of “Jesus” wasn’t blasphemously directed at you. I’d just seen his incredibly detailed likeness formed by the sweat on the inside of my glasses. I’m off to put those babies on eBay.

(June 18) I turned on my car lights to leave the World Naked Bike Ride…and there you were! I asked you to dance, but you told me you only kiss…thanks for being obstinate! I’d love to see you again and see if you’re as beautiful (I mean handsome) as your body suggests. Regardless, I hope you see this post and smile. It was a good night!

(June 17) I touched your sweet black bike on the bottom and hope to touch yours. You are lithe, poised, and lovely. Another ride this week?

(June 11) You were in a black 4 door sedan getting out of the rear right passenger door(stopped in traffic in the right lane). Me, riding my bike to work with my beard on, in the bike lane/gutter/parking lot/perfect place to get out of your car. When you swung your door open I knew I had nowhere to go because I was trapped between you and parked cars. I yelled something at you and startled you, sorry about that. I was on edge because of the rose parade crap going on all around me. I didn’t get a good look at you(blonde?) but as my left hand exploded open on the edge of your door, I think I fell in love. I see no other explanation for how I felt no pain but only a yerning to know you. I guess you thought I was ugly and ran away. This rejection was too much for me so I fainted. Thanks to the guy walking his bike who helped me lock my bike up for me because I was in shock, and thanks to the lady who gave me tissues to clean the blood from my hand(I hadn’t even noticed, oh look! Bone!). The parade was lovely as I walked to Broadway and oak bleeding and pale to get a ride to the hospital(thanks co-worker). After closing up the gash in my hand that would make the flaming lips proud I got an x-ray which showed that I had broken my hand or you had…we had broken together? I told the doc about you and that I didn’t feel any pain, he said I was still in shock, I said no, try again. He then x-rayed my heart and guess what? Broken. The worst park is that I can’t do anything to distract me from you like riding my bike or working. I hope that in surgery I’ll find the distraction I’ve been looking for. Hit me up for a drink! I can only have one though because of the Vicodin.

Portland Afoot’s July cover story is a one-page introduction to bike vacationing. BikePortland readers can subscribe for $10 a year with discount code BIKEPORTLAND.