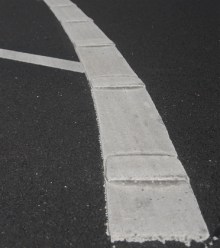 A treatment like this one on NE Couch
near the Burnside Bridge, might be
coming to Marine Drive.
(Photo © J. Maus/BikePortland)

Earlier this week, I shared that the Bureau of Transportation was considering the installation of rumble strips out on NE Marine Drive. Citing stats that show a higher than average amount of “lane departure” collisions involving motor vehicles, PBOT felt rumble strips would help alert drivers that they were leaving the roadway.

A big issue with rumble strips, however, is that they can cause problems for people on bikes.

Today I’m happy to report that PBOT heard concerns from the community and it looks like they’ll be looking to other solutions.

In an email to Oregon Bicycle Racing Association director Kenji Sugahara, PBOT bike project coordinator Jeff Smith wrote that, “Thanks to all of you for your insightful comments…we’re going to examine other treatments that are more benign to cyclists.” (PBOT reached out to OBRA specifically, because Marine Drive is very popular with serious riders who use the route for training and long weekend rides.)

Smith went on to say that they’ll likely do a treatment known as “raised thermoplastic striping” similar to what they installed to keep people from driving into the bike lane on NE Couch as it curves onto the Burnside Bridge (see photo above). Smith also said that it’s the same treatment used extensively by ODOT along the Oregon Coast on Highway 101.

I think people riding bikes will find this a much more pleasant solution than rumble strips. Thanks to PBOT for asking, and then listening to, community feedback!

Wasn’t me Molly! 😉 It was all Jeff for reaching out and the community for responding positively!

This is also a treatment that is applied on top of the asphalt, rather than being something cut into the pavement like rumble strips, so the roadway surface is undamaged. Good choice, PBOT!

But if there are so many problems with drunk/sleepy/speeding drivers crashing on this road, perhaps PBOT needs to plan bigger changes in the future to make it safer.

Now let’s see how many cyclists flip over their bars because of raised bumps.

Both stories were great. Thanks for sharing.

I hope they heard the other comments, too….MD needs more than that to become a safe corridor for recreational cyclists.

Why dd they even need to ask in the first place?

It’s a reasonable question. Cyclists aren’t all a homogeneous bloc.

Personally, I would have voted for the rumble strips. I don’t ride a racing bike and can actually deal with having them there, and I believe they would provide greater deterrent towards vehicles drifting onto the shoulder.

But the majority of people with an opinion seemed to think the rumble strips are overkill, so we’ll get less-protective but easier-to-ride raised thermoplastic instead.