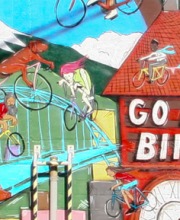 One measure of a great bike city that you won’t find in academic research papers or on various “Best Of” lists is the extent to which bicycles are represented in public art. Here in Portland, bikes are everywhere. Not just in racks and on the streets; but in murals, paintings, and sculptures throughout the city.

Some of the more well-known examples are the Community Cycling Center mural at NE Alberta and 17th, the Zoobomb Pyle at W Burnside and Stark, the “Share the Road” mural on the side of Hawthorne Auto Clinic.

The newest, large-scale bike mural in town is in northwest Portland, on the west side of the Cyclone Bicycle Supply headquarters at 2050 NW Vaughn. Cyclone’s Director of Sales John Byfield got in touch with us recently with a photo of it and a bit more… 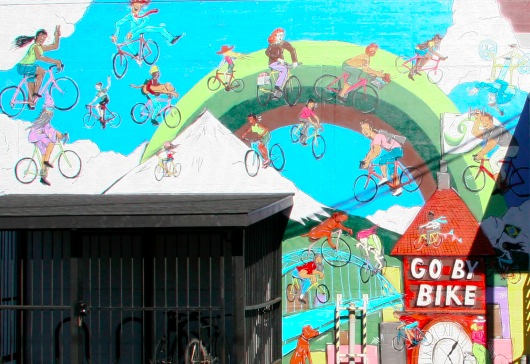 Cyclone put out a call for artists over a year ago and they finally found the right fit in a team of artists. Seattle-based illustrator Jeremy Eaton did the design and local Nick Makanna adapted it for the space and then painted it. Byfield says it took Makanna about a week to complete.

The mural is right over Cyclone’s employee bike parking, which is fitting, because Byfield says, “The cast of characters on the mural represents our fantastic staff here at Cyclone Bicycle Supply!”

I also love the mural at City Bikes at 8th and Ankeny. One of my favorite murals in town is on the back patio of Authentica (NE 30th and Killingsworth) which also has a cyclist in it.