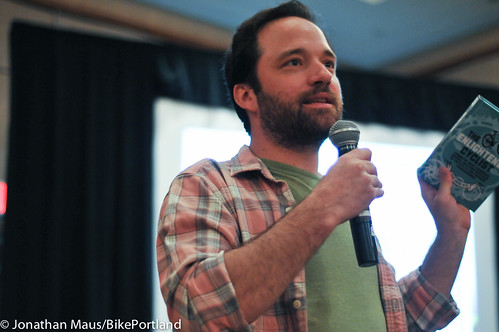 Eben Weiss, known to many as simply the Bike Snob, stopped into the National Bike Summit today

“Commuting is an interesting thing because it’s the one aspect of our life where we’re still exposed to things like fighting with strangers, with death.”
— Eben Weiss

Clarke said Weiss was there “as a special treat” for the audience, to which Weiss quipped in a self-deprecating way, “This is a treat for you guys? I’m sorry.”

Weiss said he didn’t come to the summit simply to shill for his book (even though it did just come out and he happens to be in the middle of his book tour). “I’m here because, number one, I love cycling in all its forms. That’s the #1 reason I’m here. Incidentally, I happen to have a new book out too. Just as a coincidence.”

While Weiss’s first book, Bike Snob, was a general guide to the whole scope of bike culture, The Enlightened Cyclist focuses specifically on commuter culture.

“What I wanted to do in this book is write more about practical cycling, about commuting. To me, that is the most interesting aspect of cycling right now… This book is… about commuting and what it means to commute by bike in this country.”

While Weiss says his home town of New York City has created quality, protected bikeways that allow him to ride his cargo bike with his young child, the book focuses on the “the mindset we have to adopt right now,” in an America where world-class bikeways aren’t quite here yet.

“Commuting is an interesting thing because it’s the one aspect of our life where we’re still exposed to things like fighting with strangers, with death. I mean, death is a normal part of commuting whether you take a train, ride a bike, or drive a car. You hear there’s an accident on the expressway? That’s normal, you hear it on the radio, on the traffic report: ‘Somebody died, I’m going to be late to work.’ That’s an amazing thing, a shocking thing and it’s something we take for granted. But it’s the one little component of our life that’s still pretty savage.

So what I tried to write about in the book was why that’s the way it is, and maybe by acknowledging that, we can make it a little better. It’s not an advocacy book; but it’s a work of advocacy in that I think riding a bike is a beautiful thing.”

And then, he explained the “Enlightened” part:

“I think as a bicycle commuter in this country you’re a little step ahead in terms of being an enlightened person because you’re one of the few people out there on the roads who’s transporting yourself in a way that you’ve chosen: despite the fact that it’s marginalized; despite the fact that your co-workers think you’re a little weird. We’re out there and we’ve made this choice to ride. Our minds are more primed to being better people and that’s what the book is about. I’ve made it sound kind of pompous and precious and stuff. Hopefully it’s funny and enjoyable.”

Given Weiss’s talent, I’m sure it is.

You can meet Weiss yourself when he comes to Portland for a book reading at Powell’s on April 10th.

I picked up the Bike Snob at Powell’s a few months ago (it was a recommended book) and had trouble putting it down. It was terrific! I’m not sure I’ll be able to see him when he comes to town, but I am looking forward to purchasing his new book.

I love it when he makes up words, like bike-cycle and pants-yabbies and all those other funny words.