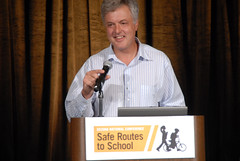 The Alliance for Biking & Walking, Bikes Belong, and the League of American Bicyclists — the three largest national bicycling advocacy organizations — intend to merge into one group. According to an official statement, the goal of the unification is to, “speed progress in creating a bicycle‐friendly America” and to “combine the significant resources of the three groups into one effective, powerful organization with a clear, integrated structure and a single voice.”

The new, unified organization is yet to be named, but the group has chosen an acting board and CEO. Tim Blumenthal, head of the industry-backed Bikes Belong, will lead the new organization. The agreement was hammered out by advocacy leaders (that included the BTA’s Rob Sadowsky) from around the country at a meeting in San Diego California last week.

At this point, the plan must still be ratified by the boards of the three organizations. That decision is set for September and if it all goes according to plan the new organization will launch in January 2013.

A transition team has already been assembled to work with the boards, staff, and members of each group.

In a statement, Hans van Naerssen, Chair of the League’s board and a member of the transition team said there’s a lot of work to do.

“We must determine how to combine the diverse strengths of a powerful alliance of state and local organizations, a storied national user group, and a vibrant industry association in a way that preserves their unique attributes and realizes the game-changing potential of a single entity.”

The changes will take place over time and all existing contractual arrangements and memberships will be honored.

This consolidation makes a ton of sense. The current attacks on bicycling from Capitol Hill have made it crystal clear that we need a stronger voice with more power and resources behind it. Despite a valiant effort by Bikes Belong, bicycling has failed to capture the imagination and respect of the broader public that’s necessary to break out of the car-centric status quo that continues to dominate discussions about transportation in America.

To get to the next level, we need the best and brightest (and deepest pockets) working together under one roof with one mission. With the coalition behind the Alliance, the wonky smarts and huge membership behind the League, and the polish and industry support of Bikes Belong, we’ve got all the pieces necessary to make it happen.

I commend everyone involved with this decision. We don’t often see large and successful organizations willing to sacrifice their individual fiefdoms and comforts in order to work together for a larger goal. I can’t wait to see how this evolves. Stay tuned!

Good for bikes, but I hope it will fare as well for pedestrian interests within the non-motorized discussion.

does this mean that someday the CCC the BTA and bikeportland will join together?

Good one kiel. I can’t speak for the CCC or BTA, but I can assure you I will never partner with an advocacy group. In my case, there’s power in independence.

bikesbelong is an industry group with a recreational biking focus. i cannot think how this could possibly work to the advantage of the league or the alliance.

Jonathan Maus (Publisher/Editor)
Reply to  are

you often take that position on bikes belong… But it sells them short IMO. Yes they have a certain focus on recreational riding, but arguably they have more on policy/infrastructure.

Did you know they fund the Safe Routes to School National Partnership, the Green Lane Project, and they sponsor best practices trips? They also have given money to tons of bike safety programs and infrastructure projects around the country through their grant programs.

And whether your like it or not, the movement needs the money, clout and polish that Bikes Belong brings to the table.

are
Reply to  Jonathan Maus (Publisher/Editor)

yes, i have sounded this note before,
http://taking-the-lane.blogspot.com/2009/12/whose-agenda.html
and i will continue to sound it.

on their most recent 990 filing,
http://dynamodata.fdncenter.org/990_pdf_archive/391/391946697/391946697_200912_990O.pdf
bikes belong coalition shows a bunch of 5k and 10k distributions to local orgs, and you will see the word “trail” in most of the descriptions of where the money went. they gave 225k to the league, which was roughly a quarter of the league’s budget for that year, so the announced merger merely formalized something that had already occurred as a practical matter.

they gave 205k to their own 501(c)(4) advocacy group, america bikes. the gave 50k to something called “smart growth america,” which is also a lobbyist, but manages to keep its lobbying expenditures within the 501(c)(3) limits. and they gave 90k to the alliance, which again seems to be about a third of that organization’s budget.

they gave 170k to a separate entity called the bikes belong foundation, which houses the safe routes program, whatever exactly that is, considering that safe routes as such is a program of the federal highway administration. other partners seem to have also pitched in, because the foundation took in a little over a million that year,
http://dynamodata.fdncenter.org/990_pdf_archive/204/204306888/204306888_200912_990.pdf
but when you look at where the foundation actually spent its money, it is mostly a bunch of 10k and 20k distributions to local organizations to help various cities secure league “bike friendly” status. i am looking at exactly one 10k grant to the city of las vegas for safe routes.

i am fascinated by your reference to the green lane project,
http://www.bikesbelong.org/bikes-belong-foundation/green-lane-project/what-is-a-green-lane/
partly because i heard rob burchfield from PBoT mention this at the BAC the other night. green lane will send your local agency money to handle the public relations side of building separated facilities. burchfield was basically saying PBoT would be prioritizing buffered bike lanes and cycletracks because they would have one eye out for the green lane money. this is how we want public policy to be made.

Big, exciting news. I expect this will be a fight in the boards, so we’ll see where this plan ends up. I agree with you, Jonathan, that the vision is an essential one. I think all of these organizations have done an excellent job of turning the nation’s interest in recreational cycling into momentum towards urban, transportation cycling. I hope that is firmly continued in the mission of the new organization.

Hmmm, interesting, you gain strength with a larger organization, but you lose maneuverability, focusability, etc.

If they’re all more or less focused on bikes, then I suppose it will work out.

If they start to be less than 50% bikes, then it will be time to tweeze the League of American Bicyclists back out of the mix.

This is interesting because Rails to Trails seems to get more done in D.C. than any of those groups. What’s even more odd is that they hardly brag about it, their fundraising materials always promote rail trails. Yet, they are responsible for the Federal Non Motorized Transportation PIlot Project in which Minneapolis, Columbia, MO and two other commuities have each recieved about $28,000,000 in SAFETEA-LU.

I believe the following statement in the article has a typo, which had me wondering if advocacy leaders were for or against this merger:

“The agreement was hammered by advocacy leaders (that included the BTA’s Rob Sadowsky) from around the country at a meeting in San Diego California last week.”

From the context I gather you mean “hammered out” but without the “out” it reads as if advocacy leaders were against it.

are
Reply to  Jonathan Gordon

sadowsky is not listed among those who participated in the san diego meeting
http://www.bikeleague.org/news/summary_bike_advocacy_unification.pdf

Rob Sadowsky
Reply to  are

Not only was I there, but i represented both the Alliance for Biking and Walking and League of American Bicyclists board. Look further down the post and you can see the listing. I am not on the transition board. I’ll also say that the idea was started by the Alliance for Biking and Walking sending an invitation to seven bicycle organizations to participate, so we have been very excited from the get-go. It allows local and state bicycle advocacy to integrate into all aspects of national bicycle advocacy instead of just through one of the smaller groups. Very exciting news.

are
Reply to  Rob Sadowsky

my bad. somehow didn’t see it.

thanks for catching that jonathan! You were right. I fixed it.

This is great news for all of us. I suspect that people who bike are more likely to walk, and vice-versa. If a unified group can work with legislators and other groups to reinforce the fact that these two modes are not alternative transportation but simply transportation (just like a car is one alternative), then perhaps we can all work together toward a future when people no longer think a car is the only (safe) way to get around. Walkers and cyclists of the world, unite!

This is great, the bicycle lobby needs to model itself after the NRA – arguably the most efficient and effective people based lobby out there – they speak with one voice and make their message simple.
What will be the bicycle version of “I’ll give you my gun when you pry it from my cold, dead hands!”

are
Reply to  Paul Brennan

a better analogy would be having general motors set transportation policy.