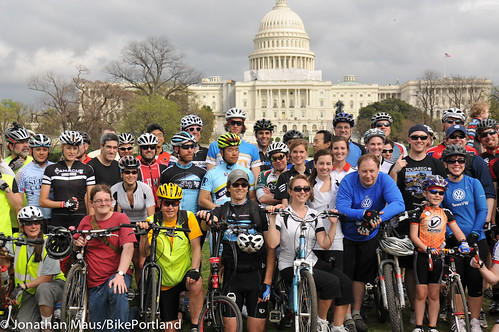 A diverse group of riders joined the last leg of the Ride on Washington and stopped for a group photo in front of the Capitol Building.
(Photos © J. Maus/BikePortland)

Tim Johnson’s Ride on Washington culminated at the Capitol Reflecting Pool today. Over 100 riders took to the bike lanes in the middle of historic Pennsylvania Avenue for the final leg of a five-day journey that began in Boston last week.

While today’s group featured a wide variety of riders — from spandex-clad pros to local bike activists, families, and National Bike Summit attendees on Capital Bikeshare bikes — about 20 of them used the ride to raise money for Bikes Belong. In total, the riders got nearly all the way to their $100,000 goal. 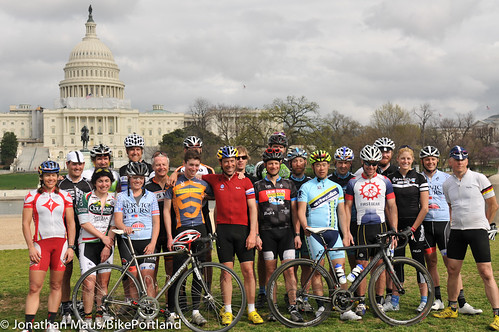 These riders rode from Boston to D.C. 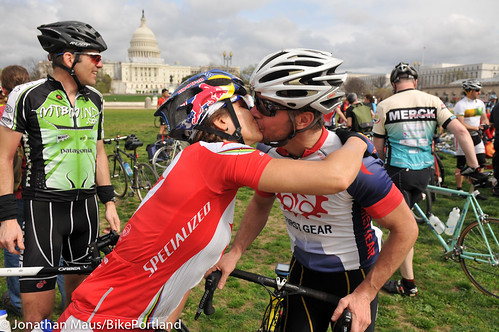 Champion mountain biker Rebecca Rusch and her partner Greg Martin celebrate the end of the ride.

The ride, now in its third year, is spear-headed by pro cyclocross racer Tim Johnson. When Tim attended the Bike Summit in 2010, he was surprised that there weren’t more racers among the nearly 1,000 advocates. Suiting up and taking to the roads with fellow pros was his way to show advocates that ‘roadies’ care about more than just training and shaving their legs.

“If we had more of our pro cyclists getting behind this movement, our movement would be two to three times as big as it is today.”
— Bruno Maier, Bikes Belong VP

For Bikes Belong, the ride is a way to encourage more star cycling athletes to get engaged with advocacy. Bikes Belong VP Bruno Maier rode the final leg himself and addressed the enthusiastic crowd with the Capitol Building looming in the background.

“If we had more of our pro cyclists getting behind this movement,” he said, “our movement would be two to three times as big as it is today.” 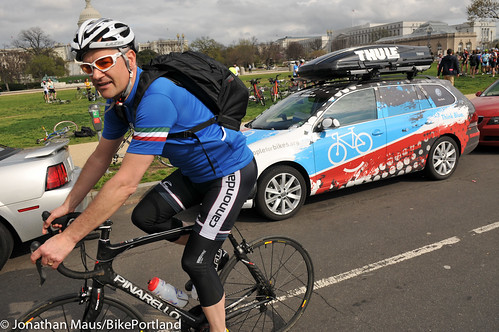 Johnson was humble when considering his ride’s place in the larger advocacy picture. “We’re a very small piece of what’s happening at this week’s summit,” he said. For Johnson, the ride is a chance to show people that even serious racers in spandex can ride considerately. He was proud that along the 500-plus mile route, they got honked at by angry people in cars only twice. 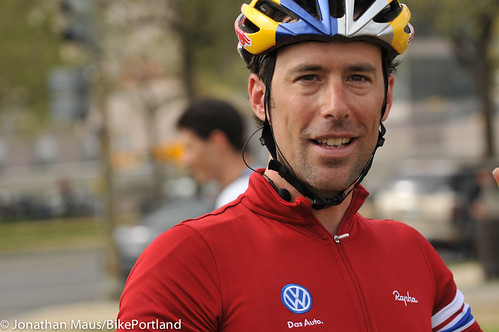 Tim Johnson: “We might be wearing spandex, but really, we’re just riding bikes.”

Speaking to the perhaps unspoken riff that exists between transportation cycling advocates and the more performance-minded racers, Johnson ended his celebratory speech today with, “It’s not about the miles or the calories or the heart rate, or whatever… We might be wearing spandex, but really, we’re just riding bikes.”

Kudos to Johnson and his crew. They were at an after-party tonight, talking up their role and enthusiasm for pushing biking forward. Their voices are important and with the dollars their high-profile events and sponsorships produce, they add a key argument to the economic case for bicycling. 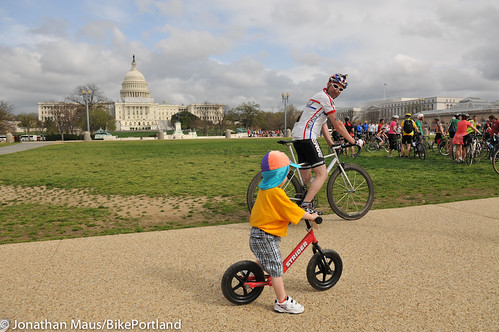 Future racer? Future advocate? How about both?