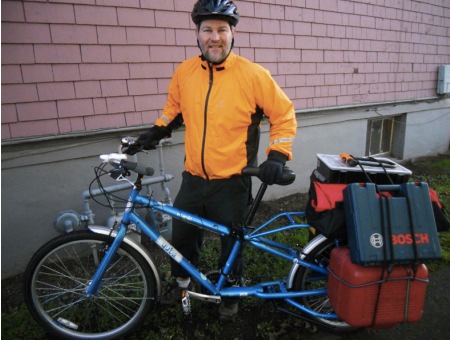 Ready for the job. Without a big truck (he uses a cargo bike and a large trailer), Chris Sanderson is finding a niche with his construction business.
(Photo: Courtesy Chris Sanderson)

Chris Sanderson, the man behind new bike-based business ‘Builder by Bike’, is a licensed general contractor who wants to show it’s possible to be a home remodeler, deck builder, and painter, without owning a big truck. 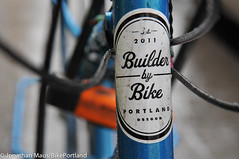 “There’s a real macho thing in this business with trucks,” he said during a brief stop at my office last week, “But I’ll see them drive away from the hardware store with 2-3 two-by-fours!”

That size of load is nothing for Sanderson, who has a massive Bikes at Work trailer and a sturdy Yuba Mundo cargo bike in his work fleet. Both set ups can carry up to 400-450 pounds of materials and equipment. 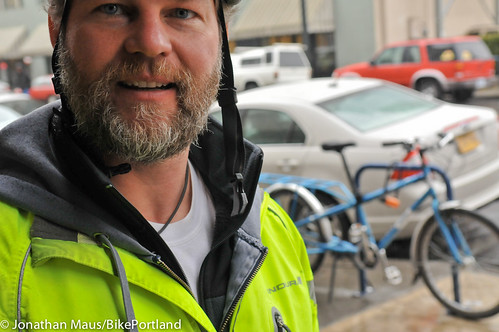 While Portland is known as a hotbed for bike-based businesses, Sanderson says the spark of inspiration to start Builder by Bike came to him several years ago when he worked as facility manager for a marketing agency in San Francisco. He sold his truck in 2007 (because he was “tired of paying parking tickets”) and took advantage of a cargo trailer rental program run by the San Francisco Bicycle Coalition (where membership comes with free bike trailer rental).

With his borrowed trailer, Sanderson would cart kegs from a brewery near the marketing agency he worked for and he’d also pedal loads of old computer hardware and other equipment to a nearby recycling facility. 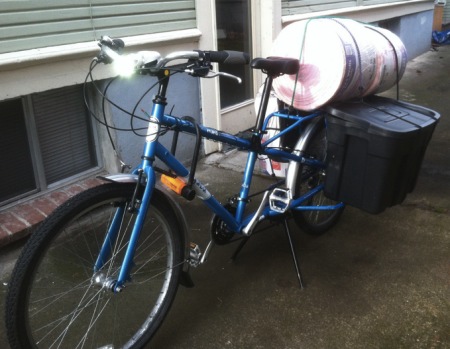 When he moved to Oak Grove (about nine miles south of Portland) in August 2010, he still had the idea of a bike business in his head. After about a year looking for long-term work and volunteering for local non-profit groups (including the BTA, Free Geek, and others), Sanderson started taking small construction jobs from friends. Still without a truck, Sanderson loaded up what he needed and pedaled from his home in Oak Grove to jobs in Kenton (about 15 miles) — and even one job up on Skyline Blvd in the West Hills.

“I dragged my whole trailer full of tools up West Burnside to get there. I didn’t know any other route. I’ve since learned my lesson.”
— Chris Sanderson

“It took me one and a half hours to get to Kenton… and for the Skyline job I dragged my whole trailer full of tools up West Burnside to get there. I didn’t know any other route,” he said smiling, “I’ve since learned my lesson.”

As word of mouth spread and he got more jobs, “It just all snowballed” and Sanderson decided to officially launch his business in August of last year.

He has since moved to a more central location and now lives near SE Belmont and 39th. Sanderson has also tapped into the welcoming local network of bike-based businesses, striking up friendships and comparing notes with delivery/promotion company Portland Pedal Power and the Bicycle Plumber Joshua de Parrie.

To get his heavy tools and materials to job sites, Sanderson chooses between a 450-pound capacity Yuba Mundo cargo bike (which he purchased from local shop Joe Bike) or a standard bike that pulls a Bikes at Work trailer (he initially used an Xtracycle, but it would fishtail with heavy loads). He recently used the trailer to haul 450 lineal feet of tongue-and-groove boards from the Rebuilding Center on N Mississippi to Kenton. 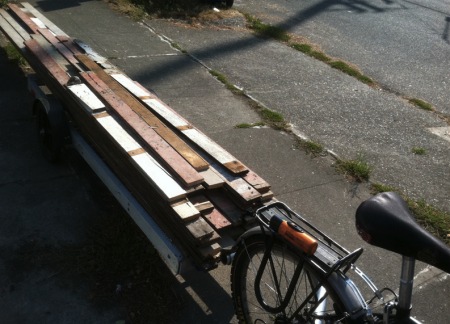 To protect tools from the rain, he has built a cover over the trailer using PVC pipe as ribbing. In a nod to Oregon’s pioneer history, he calls it the “Conestoga wagon.” 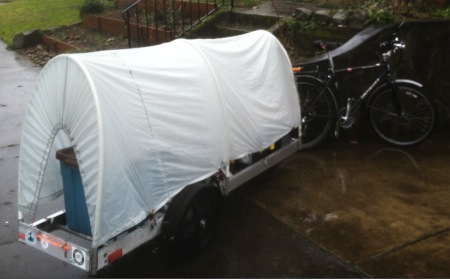 Sanderson has built up a small client base, most of whom he says are “charmed more than anything” when he pulls up on a bike. He charges $40 an hour and has a three-hour minimum. Contact Builder by Bike via email at builderbybike [at] gmail [dot] com.

FANTASTIC!
tell that to Kitzhaber and his Energy Plan’s call for “low carbon fuel commercial vehicles”

Just in time for me to start collecting bids for a new deck!

I saw this guy at the Hawthorne Fred meyers on 39th, he’s a nice fellow, he had to answer plenty of questions from fellow riders about his bike, which is beautiful.

Hank, did I meet you yesterday evening? Nice to talk to as well!

Wow, this is inspirational! Would love to chat about employment possibilities.

Now, if we could just eliminate the CCB license requirement for small contracting jobs, life would be perfect!

This looked like a suggestion that Chris isn’t licensed — I wasn’t quite clear, so excuse me if that wasn’t your intent. Anyway, I looked him up, and he does in fact have an Oregon CCB license

Is the CCB license a big hurdle? It looks like it is pretty easy to get by passing a test and only costs $160 a year. The workers compensation insurance requirement might cost more, but it’s probably a good idea for anyone who has employees.

Joseph, it costs a lot more than $160. First,you need to get a DBA from the state of Oregon. Second, get materials from an “authorized provider” to take the test. Third, take the test, and pay another $85 for testing center fee. Fourth, get bonded and insured, and fork out another $1,000 over the next year to pay for that – I put $600 down for that. Fifth, apply for the license, which was another $350. Sixth, get the right tools for the job (another $3,000). It’s no wonder that some people have a hard time getting started.

Thanks for chiming in here, Chris. My husband is doing through the process of getting his license now, and there’s quite a of bit of paperwork and cost along the way.

Check out this video taken a while back of some of our customers who use a Metrofiets Cargo Bike to get the job done. http://bit.ly/mFrX0b

Jamie, when the day comes to diversify my fleet of bikes, I’ll be in touch.

Way to go Chris, Joshua and all the other awesome bike-based builders out there! This sort of bike-based business development is why Portland plays a vanguard role in the national bicycling movement. Turns out meager investments in our cycling infrastructure lead to significant gains in our local economy!

I’m a personal friend of Chris Sanderson and I want to plug my buddy! When you ask him for a quote, ask him a question or two about his background. He’s the most honest and remarkable guy in the business. He’s a pillar of the ultra-long distance hiking community amongst many other interesting things.

Not only is he an honest (and cheap!) contractor, he does it by bike. Pretty much a no brainer!

Thats my brother. A wise steward of the earths resources. Peace!

How awesome! Whenever we need something done around the house that’s outside of our capabilities, we’ll definitely keep him in mind!

The guys in the pickup trucks: Let them haul their tools & materials under their own power and we’ll see who’s macho!

Sweet rig Chris. I’m doing the same thing in Toronto, Canada. Sounds like you have a few more hills to manage on your end. Keep those wheels rolling!