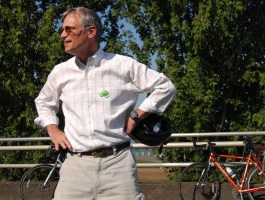 As arguably the most bike and transit-sensitive member of the U.S. Congress, Earl Blumenauer has had a trying week.

Yesterday, the widely-maligned House transportation bill, a bill that eliminates the Safe Routes to School program and basically strips out all of the pro-bike provisions, moved through a marathon hearing and was passed out of committee this morning. Also this morning, Blumenauer saw the House Ways and Means committee debate — and then pass — a bill that severs the 30-year link between gas tax revenue and transit funding.

“If we do it right I think we’ll come out of this stronger. If not, it could really complicate the next two years.”

Reflecting on the actions of his Republican colleagues over the past two days, Blumenauer said, “I don’t think they had a clue about what they were doing.” While he was understandably baffled at what has transpired, he’s already thinking ahead to what this means to the national bicycling movement.

The way Blumenauer sees, the direct threats to bicycling and transit should galvanize a nationwide response. “We’re going to see if the networks we’ve been building around the country translate into something,” he said.

“If we do it right,” he added, “I think we’ll come out of this stronger. If not, it could really complicate the next two years.”

What does “doing it right” mean exactly? I asked…

“Now’s the time to put the hammer down.”

While the news from the Hill was troubling, Blumenauer pointed to the vast coalition of support that came together on very short notice to oppose the transit funding provision. He sees that as a very good sign:

“We had representatives of over 600 individuals and groups from the Chamber of Commerce to the Sierra Club… For the first time in history we are part of a very impressive, broad coalition that is all pulling in the same direction. We’ve got an administration that has been the most supportive in history and we’ve got facts on the ground. The work that has been done with the cycling community, to broaden the base, to deal with things like economic development and Safe Routes to School, it’s all there…

It’s a chance for us not just to beat back this bad legislation, but to educate elected officials.”

Blumenauer then told a story (as politicians often do):

“I was in North Carolina a few weeks ago to do some events around livability… In the middle of the morning and with just one weeks’ notice, there was a packed room in Durham for a talk about transportation and bicycling… There were business people, local officials, cycling activists… I think it’s safe to say it really impressed my colleague [House Rep David Price (D-NC)]… He was really taken aback. He couldn’t believe the energy and the interest, and this happens nearly everywhere we go.. it’s gone viral.”

Now Blumenauer says it’s the perfect time to take that support and put it into action:

“This is the time! This is the time to take our game up a step, to make people realize that bashing cycling and pedestrians activities isn’t a freebie but there are costs and consequences… That a community doesn’t work without transit, walking, and biking.”

Blumenauer is already strategizing, meeting with stakeholders, and prepping for a possible vote on the House transportation bill which he says could come within the next weeks. When it does come up for a vote, he figures, “There’s an outside chance we could defeat it on the floor.”

What’s at stake for the U.S. bike movement? “This is chance to prove that the movement is real,” said Blumenauer, “There have been a couple of times when they attacked Planned Parenthood and public broadcasting and they got their nose bloody. I think there’s an opportunity for us to come out stronger. I think it’s a springboard.”

Do the 99% walk, bike, and take transit? If so, and we can recognize this, perhaps Blumenauer is right.

When is InterBike, the big trade show? I thought that it’s sometime about this time of year.

Since InterBike is a critical mass of bike people; could something be done there to galvanize action on the political front?

Interbike is in September.

I am constantly reminded of how lucky we are here in Oregon to have an elected representative like Earl Blumenauer. Now if we only had a couple hundred more like him congress might actually get something useful done.

We have 434 people just like him in office. They vote for things like the defense of marriage act even when his constituents feel the opposite of Earl. Do you think Portland wanted free trade with Panama and S. Korea to help the 99%.

Mr. Downs, I respect your opinion, but not everyone feels the love for Earl..

Is it wishful thinking to imagine that we can raise a cry large and loud enough to garner a veto promise from the President?

Craig, I think that the defeat of the House bill is already assured. What’s more likely is that the House and Senate go into conference committee to settle the differences between each of their bills, which is probably why Obama is waiting to see what comes as a result of that conference before making any declaration about vetoes.

“I don’t think they had a clue about what they were doing.” – Earl

Oh, I think the Republicans in Congress know exactly what they are doing.

No bike lanes, no buses, no trains, no skateboards, no parks, no paths, no community centers, no sidewalks, no public schools, just a privatized hellscape of minimum wages McJobs surrounded by endless gated real estate developments and strip malls caged in by millions of acres of concrete highways. That is the republican dream, and I aim to kill that dream dead.

I agree with Michael Downes that we are lucky to have Blumenauer as our representative. I generally feel it is time to throw out all the crooks and get new ones in. But Earl is definitely an exception. We need more like him. Who knows? Maybe more like him would make congress functional again.

Blumenauer’s right, it really is time to “put the hammer down”.

Its going to take the electoral defeat of people like Jaime Herrera-Beutler (WA-03) to teach the Republicans a lesson on the need for bipartisanship in crafting transportation funding solutions. Unfortunately, House GOP leadership deems it necessary to declare war on pedestrians and bicyclists as part of their ideological drive for oil company supremacy.

As far as waiting for what comes out of conference, I’m really tired of the “keep our powder dry” fetish.

This got a mention in today’s BikeWalkTulsa Word on the Street.