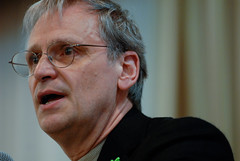 Oregon Congressmen Earl Blumenauer and Peter DeFazio are pulling no punches when it comes to leveling criticism at the House transportation bill that was released yesterday.

Referring to it as the, “Republican Highway and Transportation Bill,” Blumenauer said in an official statement, “I am appalled at the fantasy finance scheme Republicans are proposing.” Blumenauer is a senior member of the House Budget and Ways and Means committees, so he focused his criticisms on financial issues instead of simply bashing the bill for being anti-bike.

“Rather than working in a bipartisan fashion to find revenue for the Highway Trust Fund, House Republicans instead would tie revenues from oil and gas drilling in the Arctic Wildlife Refuge and in our coastal waters to transportation funding. Drilling in these areas is opposed by the public and runs the same environmental risks that gave us the Deepwater Horizon disaster. What’s more, my colleagues know full well that revenues from this drilling would do almost nothing to close our funding gap. The nonpartisan Congressional Budget Office estimates that the best case scenario would result in $5 billion over ten years, when we need $60 billion over five years to fund the Trust Fund. This bill’s reliance on such an inadequate funding scheme shows just how unserious and partisan an effort it is at real transportation reform.”

Blumenauer said the current House bill would make it hard for states and local municipalities to have a say in transportation decisions, “Making it harder for citizens to have a say about projects happening in their backyard.”

More specifically about bicycling, Blumenauer blasted the bill for eliminating bike-specific funding streats, “At a time when communities are clamoring for cheaper, more efficient ways to increase capacity and save their citizens money on gasoline.”

“Given the economic realities we are facing,” he continued, “it is absurd to block communities from spending money on projects that make biking and walking commutes easier.” 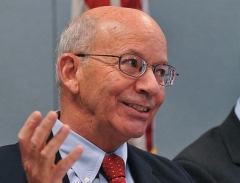 House Rep. Peter DeFazio says the Republican-led transportation bill is a step “backward” in large part because it’s too small (Blumenauer made the same point). The current bill is just $230 billion, which is a 35 percent reduction from the $450 billion legislation DeFazio drafted (and got approved) back in 2009.

In an email to constituents, DeFazio wrote, “It’s simply unfathomable that the Republicans would take us backward at a time when our economic competitors are increasing investments in state of the art infrastructure.”

“You can be sure that I will oppose these cuts,” reads DeFazio’s email, “and fight for robust funding for the transportation reauthorization bill, including alternative transportation modes.”

As our Oregon delegation preps for battle on Capitol Hill, advocates are urging everyone to call or write their representatives to tell them to support two key amendments. Stay tuned.

UPDATE 2/2, 7:15am: The bill is having a markup session this morning on the Hill. Watch Rep DeFazio’s very angry opening remarks. A must see:

There’s nothing at all “unfathomable” about Republicans wanting to take us backwards. It’s practically the party motto.

except for the Moon colony.

I’m so happy to have Earl Blumenauer representing me. Now I just wish science would catch up so we can create an army of Earl clones to to stand up against uneducated red army (GOP).

At about 2:30 into the video, DeFazio is very emphatic about the jobs created by investing in transportation, and mentions one project specifically:

Anyone know what project he was talking about?

I’m guessing that’s the replacement bridge they’re building over the Willametter River at the south end of Eugene.

It hasn’t been discussed much, but the “fantasy finance scheme” that Rep. Blumenauer mentioned consists of:

Republicans seem to advocate for anything that will actively destroy our planet. I swear, if someone introduced a “Create Jobs By Dumping PCBs Into Our Lakes And Streams” act, the Republican Party would fall all over themselves to cosign it.

Where’s the gas tax proposal? It hasn’t been raised in years, it’s time.